Topic 11.1 Sieve Elements as the Transport Cells between Sources and Sinks

Topic 11.1 Sieve Elements as the Transport Cells between Sources and Sinks

Methods for demonstrating that sugar is transported in sieve elements

In classic experiments on the translocation of organic solutes performed by the Italian anatomist Marcello Malpighi in 1686, the bark of a tree was removed in a ring around the trunk (Web Figure 11.1.A). In 1928, T. G. Mason and E. J. Maskell observed that this treatment, called girdling, has no immediate effect on transpiration, since water moves in the xylem, interior to the bark (Mason and Maskell 1928) (See Web Essay 4.2 for an experiment that does stop transpiration). However, sugar transport in the trunk is blocked at the site where the bark has been removed. Sugars accumulate above the girdle—that is, on the side toward the leaves—and are depleted below the treated region. Web Figure 11.1.A   Tree trunk immediately after girdling (left) and later (right). Girdling is the removal of the bark of a tree in a ring around the trunk. At right, materials translocated from the leaves have accumulated in the region above the girdle and caused it to swell.

Eventually the bark below the girdle dies, while the bark above swells and remains healthy. Mason and Maskell concluded that sugar is transported in the bark of the tree and that the sieve elements are the cellular channels of sugar transport. The latter conclusion was based on an observed high correlation between leaf and bark sucrose contents and on the high sucrose concentration calculated to be present in the sieve elements.

More sophisticated experiments on phloem translocation became possible in the 1940s, when radioactive isotopes became available for scientific research. Labeled organic compounds can be introduced into the plant in various ways. For example, carbon dioxide can be labeled with 14C or 11C and supplied to an intact mature leaf enclosed in a sealed chamber. These two isotopes of carbon, 11C and 14C, have very different half-lives (the half-life is the time required for the radioactivity to decrease by one-half). The half-life for 11C is 20 minutes; that for 14C is 5,600 years. For this reason, the isotopes are used in different types of experiments. Carbon-14 is useful for long term experiments analyzing the compounds in which the radioactivity is present. Carbon-11 would disappear before such an analysis could be made. Carbon-11 is most useful when the researcher wishes to repeat measurements on the same plant. Since only a few hours are needed for the isotope in the plant to disappear, the radioactivity used in one experiment does not interfere with next.

The labeled carbon dioxide is incorporated into organic compounds via the CO2-fixing reactions of photosynthesis (see Web Topic 8.2) and eventually into transport sugars. In another type of experiment, researchers bypass the photosynthetic reactions by supplying labeled transport sugar, usually sucrose, directly to the leaf.

To identify the pathway of sugar translocation, we must determine the tissue or cellular location of the isotope, usually by means of a technique called autoradiography. In tissue autoradiography, tissue of labeled plants is rapidly frozen, freeze-dried, embedded in paraffin or resin, and sliced into thin sections. The sections are then coated with a film of photographic emulsion.

During a period of exposure, radiation from the radioactive compound fed to the plant exposes the film, and when the film is developed, silver grains appear wherever the label was present in the tissue. A comparison of the tissue section and the pattern of silver grains shows the location of the label in the tissue. In terms of the transport pathway for sugars, the label initially appears in the sieve elements of the phloem, confirming the results of the earlier experiments (Web Figure 11.1.B). 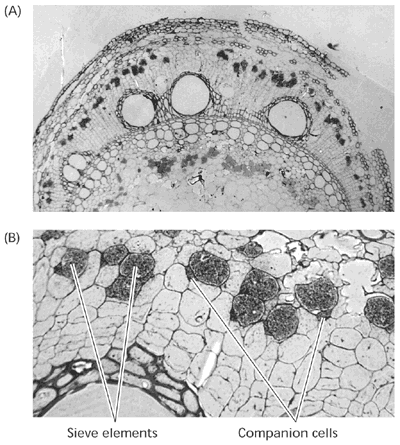 Web Figure 11.1.B   Photosynthate from the leaves appears in the sieve elements of phloem in the stem. 14CO2 was supplied to a source leaf of morning glory (Ipomea nil). 14C was incorporated into sugars synthesized in the photosynthetic process, which were then transported to other parts of the plant. The location of the label is revealed in the tissue cross sections by the presence of dark grains on the film. (A) shows a low magnification of the cross section of the stem (50x), revealing dark spots resulting from the silver grains in the film, shown in higher magnification (325x) in (B). The label is confined almost entirely to the sieve elements of the phloem. (Courtesy of D. Fisher.)

Phloem transport occurs in sieve elements from sources to sinks. Although the overall pattern of transport in the phloem can be stated simply in this way, the specific pathways involved are often more complex, depending on proximity, development, vascular connections, and modification of translocation pathways. Not all sources supply all sinks on a plant; rather, certain sources preferentially supply specific sinks. In the case of herbaceous plants, such as sugar beet (Beta vulgaris) and soybean (Glycine max), the following generalizations can be made 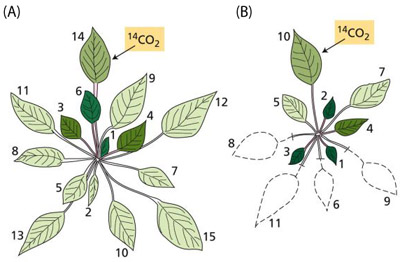 Web Figure 11.1.C   Source-to-sink patterns of phloem translocation. (A) Distribution of radioactivity from a single labeled source leaf in an intact plant. The distribution of radioactivity in leaves of a sugar beet plant (Beta vulgaris) was determined 1 week after 14CO2 was supplied for 4 hours to a single source leaf (arrow). The degree of radioactive labeling is indicated by the intensity of shading of the leaves. Leaves are numbered according to their age; the youngest, newly emerged leaf is designated 1. The 14C label was translocated mainly to the sink leaves directly above the source leaf (that is, sink leaves on the same orthostichy as the source; for example, leaves 1 and 6 are sink leaves directly above source leaf 14). (B) Same as A, except all source leaves on the side of the plant opposite the labeled leaf were removed 24 hours before labeling. Sink leaves on both sides of the plant now receive 14C-labeled assimilates from the source. (A and B based on data from Joy 1964.)

The plasticity of the translocation pathway depends on the extent of the interconnections between vascular bundles and thus on the species and organs studied. In some species, the leaves on a branch with no fruits cannot transport photosynthate to the fruits on an adjacent defoliated branch. But in other plants, such as soybean, photosynthate is transferred readily from a partly defruited side to a partly defoliated side.