Far-red reversible stomatal opening can also be observed in Arabidopsis npq1 mutants. Earlier studies with npq1 stomata have shown that, despite their lack of a specific blue-light response, they open normally in response to white light. However, if the experiments with white light are carried out under a far-red light background, the white light-stimulated opening is substantially reduced (Web Figure 10.4.A). Wild-type stomata are insensitive to far-red light (Talbott et al. 2003). These findings suggest that in both Paphiopedilum and Arabidopsis npq1, phytochrome-dependent opening compensates for the absence of a major component of the stomatal response to light (guard cell photosynthesis in Paphiopedilum and a specific blue-light response in npq1). 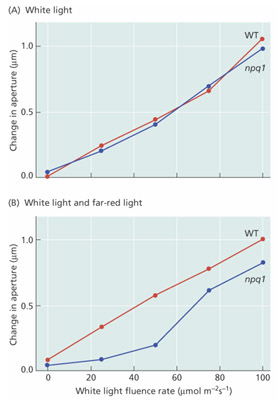 Web Figure 10.4.A  Stomata from the zeaxanthin-less mutant of Arabidopsis npq1 lack a blue light response but show a phytochrome response. (A) Despite the lack of blue light response in npq1, wild-type and npq1 stomata show indistinguishable dose–response curves to white light. (B) In the presence of 100 μmol m–2 s–1 of far-red light, the dose–response curve of wild-type stomata to white light remains the same but the response of npq1 stomata is substantially reduced. These results indicate that phytochrome-dependent opening in npq1 compensates for the absence of a blue-light response. (After Talbott et al. 2003.)

Recent work with stomata from cop1 mutants of Arabidopsis showed that they remain widely open in the dark (Mao et al. 2005). In addition, this study shows that the proteins CRY1, CRY2, PHOT1, and PHOT2 are positive modulators of the zeaxanthin-mediated stomatal response to blue light, whereas COP1 represses that modulation. Recall from Chapter 16 that COP1 and cryptochrome interact with phytochrome, both in vivo and in vitro. Taken together, these results point to a novel control of stomatal movement involving phytochrome, COP1, CRY1, CRY2, PHOT1, and PHOT2.