Guard cell chloroplasts are a conspicuous structural feature of guard cells (see textbook Figure 10.1), and their physiology and biochemistry have been studied for several decades. In contrast, the chloroplasts of phototropically sensitive coleoptiles have only recently been analyzed in detail. The coleoptile chloroplast had been suggested as a possible site for photoreception in oat coleoptiles by Kenneth V. Thimann and his coworkers in 1960, but interest in the flavin hypothesis later in that decade shifted attention away from coleoptile chloroplasts and these organelles have been virtually ignored for several decades.

Recent studies have shown that the coleoptile chloroplast evolves oxygen, fixes CO2 photosynthetically, and operates the xanthophyll cycle (Zhu et al. 1995). Dark-grown, etiolated coleoptile tips have violaxanthin and antheraxanthin but no zeaxanthin, and they accumulate zeaxanthin when irradiated (Quiñones and Zeiger 1994). 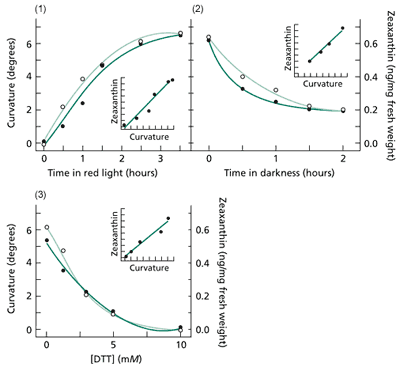 Web Figure 10.3.A   The relationship between the zeaxanthin content of corn coleoptile tips and bending in response to a pulse of blue light. Zeaxanthin content was altered by preillumination time under red light (1), transfer of zeaxanthin-containing coleoptiles to the dark (2), and a saturating red-light pretreatment in the presence of increasing concentrations of DTT, an inhibitor of zeaxanthin formation (3). (After Quiñones and Zeiger 1994.)

Red light–treated coleoptiles with a high zeaxanthin content convert their zeaxanthin to violaxanthin when transferred to the dark. Phototropic bending in response to a pulse of blue light given at different time intervals after the transfer to the dark is linearly related to zeaxanthin content (see Web Figure 10.3.A, part 2).

When corn coleoptiles are given a saturating red-light pretreatment and a blue-light pulse in the presence of increasing concentrations of DTT (an inhibitor of zeaxanthin formation), bending and zeaxanthin content decrease linearly as a function of DTT concentration (see Web Figure 10.3.A, part 3).

These remarkable similarities suggest that these distinct characteristics are typical of chloroplasts specialized in signal transduction, as opposed to the classic role of the mesophyll chloroplast, specialized in photosynthetic carbon fixation.