Studies on photosynthetic algae, such as Chlorella, have shown that irradiation by blue light increases respiratory rates of dark-grown cells, with an action spectrum that is typical of specific blue-light responses (Kamiya and Miyachi 1974). These changes in respiratory rates are associated with a drastic shift in metabolism, which can also be observed in experiments using blue and red light.

Red light stimulates photosynthetic carbon fixation in these algae, and the fixed carbon is incorporated into glucose and sucrose. The metabolic shift is observed when low photon fluxes of blue light are added to the red-light treatment; glucose and sucrose are no longer synthesized, and the fixed carbon is used in the biosynthesis of organic acids, amino acids, and proteins.

Blue light is also a powerful regulator of guard cell metabolism. Guard cells irradiated with red light accumulate sucrose (Talbott and Zeiger 1998); if low photon fluxes of blue light are added to the red-light irradiation, sucrose stops accumulating, and guard cells accumulate K+ and malate2– (Web Figure 10.2.A). Thus, the blue light–stimulated shift to the synthesis of the organic acid malate in guard cells parallels the shift to the synthesis of organic acids and amino acids in photosynthetic algae. 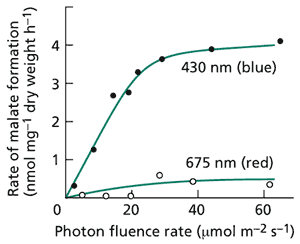 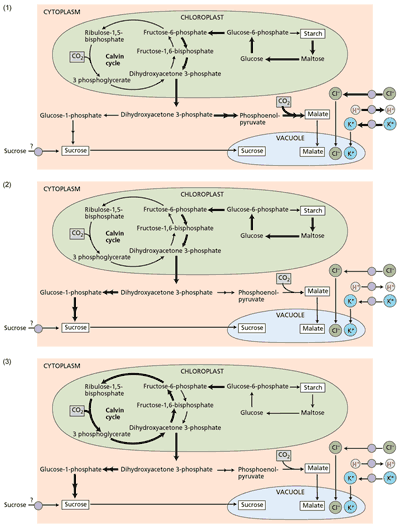 Web Figure 10.2.B   Three distinct osmoregulatory pathways in guard cells. The dark arrows identify the major metabolic steps of each pathway that lead to the accumulation of osmotically active solutes in the guard cells. (1) Potassium and its counterions. Potassium and chloride are taken up in secondary transport processes driven by a proton gradient; malate is formed from the hydrolysis of starch. (2) Accumulation of sucrose from starch hydrolysis. (3) Accumulation of sucrose from photosynthetic carbon fixation. The possible uptake of apoplastic sucrose is also indicated. (From Talbott and Zeiger 1998.)

A study of the effects of calcium and abscisic acid (ABA; see textbook Chapter 23) on stomatal apertures under red and blue light found that increasing calcium or ABA concentrations inhibited blue light–stimulated stomatal opening in a concentration-dependent fashion, but had no effect on red light–stimulated opening (Parvathi and Raghavendra 1997). These contrasting responses to blue and red light can be explained by the effect of the treatments on guard cell osmoregulation. ABA and high calcium concentrations have been shown to inhibit proton pumping and potassium uptake, which are central to blue light–stimulated stomatal opening. Red light, on the other hand, stimulates guard cell photosynthesis and sucrose accumulation, and this osmoregulatory pathway appears to be insensitive to ABA and calcium.

Unlike visual systems, the color information in the blue light and red light treatments does not appear to have functional significance for photosynthetic organisms. Rather, their dramatic experimental effects appear to be a result of a differential stimulation of carotenoids and chlorophylls that are selectively excited by blue light applied under a saturating background of red light, or by red light alone, respectively.

Under solar radiation, regulatory pathways activated by the excitation of these pigments are used by the chloroplast to sense key features in their environment and to control their metabolism.