How do plants sense the direction of the light signal?

Light gradients between lighted and shaded sides have been measured in coleoptiles of monocots and in hypocotyls of dicot seedlings irradiated with unilateral blue light. When a coleoptile is illuminated with 450-nm blue light, the ratio between the light that is incident to the surface of the illuminated side and the light that reaches the shaded side is 4:1 at the tip and the midregion of the coleoptile, and 8:1 at the base (Web Figure 10.1.A). 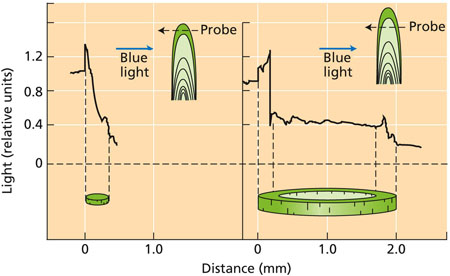 Web Figure 10.1.A   Distribution of transmitted, 450 nm blue light in an etiolated corn coleoptile. The diagram in the upper right of each frame shows the area of the coleoptile being measured by a fiber-optic probe. A cross section of the tissue appears at the bottom of each frame. The trace above it shows the amount of light sensed by the probe at each point. A sensing mechanism that depended on light gradients would sense the difference in the amount of light between the lighted and shaded sides of the coleoptile, and this information would be transduced into an unequal auxin concentration and bending. (After Vogelmann and Haupt 1985.)

On the other hand, there is a lens effect in the sporangiophore of the mold Phycomyces irradiated with unilateral blue light, and as a result, the light measured at the distal cell surface of the sporangiophore is about twice the amount of light that is incident at the surface of the illuminated side. Light gradients and lens effects could play a role in how the bending organ senses the direction of the unilateral light (Vogelmann 1994).