In many colored flowers and reproductive tissues such as fruit, the color is produced by anthocyanins, pigments found in the vacuole. Various shades of color can produced by different anthocyanins, different pH of the vacuole (the color of many anthocyanins is pH-sensitive), or if there are some pigmented and some unpigmented vacuoles in the same cell, a case of intracellular vacuole differentiation. This can be seen in the petal cells of red hibiscus, where one vacuole is red and one vacuole is clear. 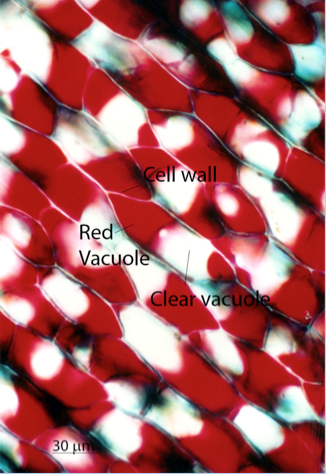 Web Figure 1.8.A Vacuole differentiation within cells of hibiscus flowers. Within a single cell, both red and white (clear) vacuoles occur. (From Griffing.)

Vacuoles are the end-point for plant storage and, hence, the organelle that contains the proteins in seeds for human nutrition. As can be seen in Web Table 1.8.A, some of these “protein bodies,” or seed protein storage vacuoles, arise directly from the ER, while others arise from the Golgi.

Vacuoles are also the site of sucrose storage in sugar cane and sugar beets, where they are specialized to take up and store large amounts of sucrose that is synthesized in the cytoplasm from the triose phosphates made in the chloroplast.

The natural function of storage can also be turned to defense. Such high concentrations of stored oxalic acids can be concentrated in the vacuole that it can come out of solution and form vacuolar crystals or raphides (see textbook Figure 23.7). These needle-like crystals can damage the digestive tract of animals that eat leaves of plants containing them. Animals learn not to eat them, and the plants are thereby protected from herbivory.

In Arabidopsis, the model plant, vegetative tissues such as the stem epidermal cells have bodies that are derived from the ER and move with it, but contain hydrolytic enzymes such as a β-glucosidase. They are called ER bodies, but could be classed with the lytic compartment, of which vacuoles are the major member. These fusiform-shaped bodies are thought to function in defense against herbivory because the lytic enzymes can cause digestive problems.