ER exit sites and Golgi move as a single unit

The movement of protein from the ER to the Golgi is called anterograde transport and it is mediated by ER coat proteins (COPII) that accumulate at the site where the ER buds off to form tubules or vesicles that are targeted to the Golgi. The site where this exit from the ER takes place is called the ER exit site (ERES), a special protein domain in the ER, which in animal cells resides far from the one to eight Golgi stacks located next to the nucleus. However, in highly vacuolated plant cells, the ERES remains closely associated with the motile Golgi stack. Movie A shows the hundred or so individual Golgi stacks move while associated with ER and cytoskeletal tracks. Green fluorescent protein (GFP) marks both the ER and the Golgi because the GFP is reporting on the distribution of a receptor (ERD2), which cycles between the ER and Golgi. The recycling of protein back to the ER from the Golgi is called retrograde transport and is mediated by the Golgi coat proteins (COPI). Proteins that stay in the ER, so-called ER resident proteins, briefly leave the ER via COPII, but are recognized by the recycling receptor (ERD2) which binds to a terminal four amino acid sequence (KDEL or HDEL). In order to sustain this efficient movement between the ER and the Golgi, these organelles track together in plants. 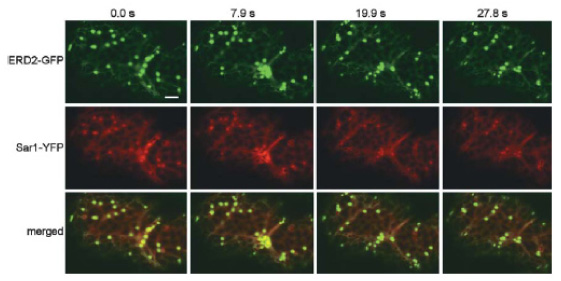 Movie 2 The COPII region is shown by SAR 1, a Rab protein involved in ER transport to the Golgi. The Golgi and the ER is shown with ERD 2. Time lapse panel of the movie is shown.

Certainly, the concerted movement shown in Movie 2 indicates that there are tubular connections between the Golgi and the ER or there is some kind of protein scaffold that holds the structure together. These are not mutually exclusive alternatives. The presence of such a protein scaffold could be inferred from early micrographs of plant Golgi bodies because they were surrounded by a zone of exclusion which excluded other organelles, including the ubiquitous cytoplasmic ribosomes. Recent work shows that scaffolding proteins called golgins occur in plants. These are either trans-membrane proteins or proteins that bind to lipid-anchored GTP-binding proteins that reside in the Golgi. These scaffolding proteins have large, extended structural domains that would allow vesicles to accumulate and be stabilized in the vicinity of target membranes. Presumably, similar proteins are involved in linking cisternae to each other, but they have not yet been described. Intercisternal elements, small structural rods seen with certain stains in electron microscopy occur between the trans-most cisternae, and may serve a scaffolding function on the maturing, trans face of the Golgi.