A special class of targeting recognition proteins, called SNAREs (Web Figure 1.9.A) and Rabs (Web Figure 1.9.B), are involved in the selective fusion and fission of vesicles and tubules that serve as transporters between the compartments of the endomembrane system. Different SNAREs and Rabs are found associated with different membrane systems. SNAREs on the shuttle vesicle, called v-SNAREs, bind with SNAREs on the target membrane, called t-SNAREs. There are many more SNARE genes in plants than animals, and they may not only play a role in membrane fusion, but also membrane-membrane anchoring. The Rabs are small GTP-binding proteins (see Web Figure 1.9.A) that provide both energy and directionality to the process. There is also an important protein ATPase on the cytoplasmic leaflet of most endomembranes that is involved in breaking the bonds between the v- and t-SNAREs once fusion has occurred (see Web Figure 1.9.B). 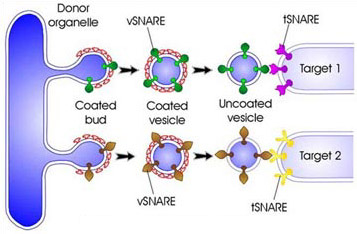 Web Figure 1.6.A   Vesicle targeting is mediated by complementary SNAREs. Coated vesicles first bud from a donor organelle with a vesicle-specific v-SNARE. The vesicle is then targeted to the acceptor membrane displaying the complementary t-SNARE. The coats are released from the vesicles, allowing the vesicle to dock with its t-SNARE on the acceptor membrane. After docking, the vesicle fuses with the membrane. (Figure courtesy of Danton H. O’Day, University of Toronto, Mississauga, from his website "Vesicle Traffic: COPs, SNARES & Other Things".) 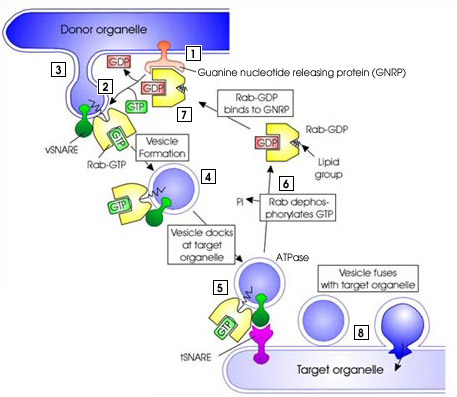 Web Figure 1.6.B  Rab-GTPases drive the formation, transport, and fusion of vesicles. Rabs are activated by specific guanine nucleotide exchange factors (GEFs, which are shown in figure as guanine nucleotide releasing protein [Step 1]) and inactivated by GTPase-activating proteins (GAPs, not shown in figure, but occurs at Step 6). Rab-GDP binds to the guanine nucleotide exchange protein or GEF on the donor organelle membrane, which causes GDP to be exchanged for GTP (Step 1). Rab-GTP then attaches to the donor membrane via an exposed lipid tail (Step 2). v-SNAREs and coat proteins (not shown) accumulate at the same site, leading to vesicle formation (Step 3), and the vesicle migrates to the target organelle (Step 4). After the coat is released (not shown), the vesicle docks with the complementary t-SNARE on the acceptor organelle membrane (Step 5). The GTP bound to Rab is hydrolyzed to GDP (Step 6), which releases Rab-GDP to the cytosol, where it recycles to the donor organelle (Step 7). The vesicle fuses with its acceptor membrane (Step 8). (Figure courtesy of Danton H. O’Day, University of Toronto, Mississauga.)