Topic 1.4 The Nuclear Pore and Proteins Involved in Nuclear Import and Export

Topic 1.4 The Nuclear Pore and Proteins Involved in Nuclear Import and Export

The nuclear pore complex (NPC) acts as a supramolecular sieve that spans both membranes of the nuclear envelope. The proteins that make up the pore are called nucleoporins. Parallel rings, exhibiting octagonal symmetry, are situated near the inner and outer membranes of the nuclear envelope (Web Figure 1.4.A). Various nucleoporin proteins form the other structures, such as the nuclear ring, cytoplasmic filaments, and the nuclear basket. Small metabolites diffuse freely through the NPC, but the flow of large proteins and RNA is selective. According to a recent model, selectivity is derived from a meshwork of unstructured nucleoporins within the aqueous pore. To penetrate this meshwork into or out of the nucleus, macromolecules must be associated with specific carrier proteins, such as karyopherins. Ribosomes presumably exit the nucleus by physically moving through the meshwork. 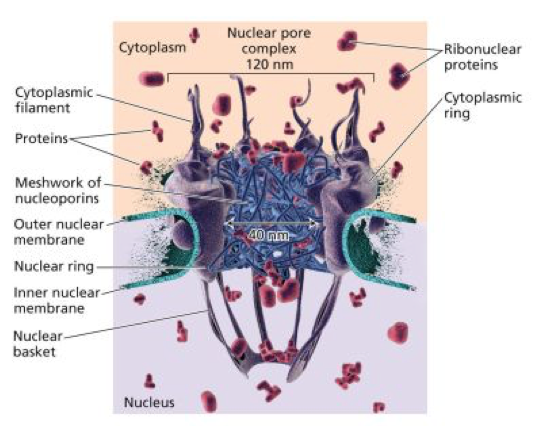 The proteins involved in import and export

Three proteins required for nuclear import and export have been identified: Ran, a small GTPase, and carrier proteins that traverse the nuclear pore, which are called karyopherins (importins, exportins, and transportins). Although this trafficking pathway is shared by both plants and animals, plant importins recognize a wider spectrum of nuclear localization signals than animal importins. 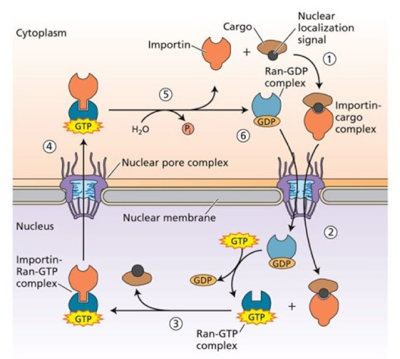 For export, a similar translocation process occurs, but the affinity of the export karyopherin for its cargo is increased by its association with Ran. Some karyopherins can operate in both directions, that is for both import and export, but they carry different cargo in the different directions. They can even carry certain small RNAs (e.g., tRNAs), not just protein, but use a different recognition pathway (not NLS’s) for binding this cargo.