In flowering plants, the diploid sporophyte is by far the largest and most conspicuous generation (see textbook Figure 1.2). It produces the stems, leaves, roots, and flowers. The flowers produce spores of different sizes (a condition called heterospory) that are retained within the flower.

The flower consists of several leaflike structures attached to a specialized region of the stem called the receptacle (Web Figure 1.3.A). Sepals and petals are the most leaflike. Petals have the primary function of attracting insects to serve as pollinators, accounting for their often showy and brightly-colored appearance. The stamen is the male sexual structure, and the pistil is the female sexual structure. The stamen consists of a narrow stalk called the filament and a chambered structure called the anther. The anther contains tissue that gives rise to pollen grains. The pistil is composed of one or more united carpels; the pistil, or in some flowers a whorl of pistils, is sometimes referred to as the gynoecium. The pistil consists of the stigma (the tip where pollen lands during pollination), the style (an elongated structure), and the ovary. The ovary, the hollow basal portion of the pistil, completely encloses one or more ovules. Each ovule, in turn, contains an embryo sac, the structure that gives rise to the female gamete, the egg. 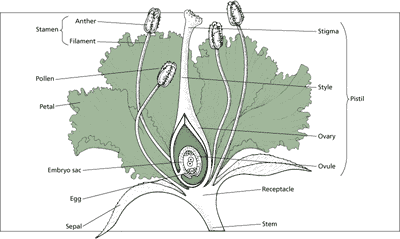 Web Figure 1.3.A   Schematic representation of an idealized flower of the angiosperms.

Generation of the female gametophyte inside the flower

Inside the ovule, the female megasporophyte makes the megasporocyte within the megasporangium. The megasporocyte undergoes meiosis to produce four haploid megaspores, three of which degenerate. The surviving one develops into the megagametophyte, or embryo sac. The embryo sac contains eight haploid nuclei and is the female gametophyte. It contains the egg, two accessory cells to the egg, the synergids, two polar nuclei, and three antipodal cells.

Generation of the male gametophyte inside the flower

The pollen grain is transferred to the stigma. If the pollen is compatible, a pollen tube containing two sperm will grow to the base of the embryo sac. If the pollen is incompatible, the tube will not form or only grow part way. Many plant species cannot pollinate themselves because they have self-incompatible pollen. When the pollen tube reaches the embryo sac, the generative cell divides and produces two sperm cells. The sperm enter one of the two synergids, which then degenerates and releases the two sperm. One fuses with the two polar nuclei to form the triploid endosperm. The other fuses with the egg. This is the process of double fertilization.

The first division of the fertilized egg is a polar one, establishing the longitudinal axis of the plant. The top cell gives rise to the embryo proper and the bottom cell produces the suspensor. The suspensor divides a few times and becomes an organ through which endosperm nutrients are absorbed.

After several rounds of division, the embryo becomes globular. In eudicots, this is followed by the extension of two lobes, which eventually make the cotyledons. This early lobed stage is called the heart stage because the embryo is shaped like a heart. As the cotyledons grow, the shoot apex, hypocotyl, and root apex appear. At this stage the embryo is shaped like a torpedo and is this is thus called the torpedo stage. Eventually, the cotyledons curl around inside the integumentary tissue that forms the seed coat, mostly filling the seed.