Since the time of Aristotle (384–322 B.C.E.), biologists have sought to classify organisms. Many early classifications of plants, as in Historia Plantarum by Aristotle’s student Theophrastus (371–287 B.C.E.) and in De Materia Medica by Dioscorides (40–90 A.D.), sorted plants by name, size, where they were commonly found, and their usefulness, particularly their medical usefulness. In fact, De Materia Medica served as a source of pharmacological and plant knowledge for more than fifteen-hundred years, one of the few scientific treatises never "lost" in the Dark Ages. A watershed occurred in the Renaissance, when the uses of plants by people were discarded as a means of classification. In 1583, Andrea Cesalpino (1524–1603) published his De Plantis Libri XVI (Sixteen Books on Plants), using plant morphology, the form and structure of plants, as a means for classification. In particular, Cesalpino used fruit and seed morphology. Further attempts to classify plants based on "natural affinity" appeared when Mathias de l'Obel (1538–1616) published Icones Stirpium (Images of Plants, 1591) and Kaspar Bauhin (1560–1624) published Pinax Theatri Botanici (Illustrated Exposition of Plants, 1596, with more than 6000 different plant species). Many of their groupings of plants are those used today.

As more plants became known and described, methods for identifying plants, or plant keys, became desirable. The dichotomous key, in which a plant can be identified through a series of either/or choices (i.e. big seed vs. little seed, jagged-edge leaf vs. smooth-edge leaf), was developed for medical plants by Adam Zaluziansky (1558–1613) in his Methodus Herbariae (1592). A dichotomous key serving as a visual guide for identifying all plants was presented by Richard Waller (1660–1715) to the Royal Society of London over a series of years (1689–1713) and a manuscript of the watercolor illustrations to this guide is held in the library of the Royal Society. These were acknowledged to be "artificial systems," whose purpose was ease of identification. The first extensive, written dichotomous key for all plants was a supplement to Jean Baptist de Lamarck's (1744–1829) Flore Françoise (1778).

In the years just preceding Lamarck's work, attempts at classification were done based on the concept of "Fixity of Species" (i.e., there are a fixed number of species and all that is needed to reveal their order is to adequately describe and group them). This was part of the philosophical (and religious) underpinning of the plant and animal classification systems, taxonomies, of John Ray (1627–1705) and Carolus Linnaeus (1707–1778). Linnaeus introduced binomial nomenclature, whereby organisms can be identified by two names, their genus and species. Up to that time plants and animals were identified by a short phrase describing their identifying characters. This taxonomic superstructure, or taxons, by which organisms are now named includes genus and species as the bottom two taxons in an eight-taxon naming hierarchy: Domain, Kingdom, Phylum (Division), Class, Order, Family, Genus and Species.

Lamarck was an early proponent of evolution, whereby species' attributes were not fixed, but could change, or evolve, with time. Revealing the mechanisms by which that change occurs has been the central triumph of modern biology, from Alfred Russell Wallace's (1823–1913) and Charles Darwin's (1809–1882) notions of descent with modification and natural selection, to the genetic basis of inheritance, the nature of the changing genome, and recent discoveries in epigenetics. It is now the goal of classification to show evolutionary relationships.

Current classification systems are based on evolutionarily shared characters; organisms with shared traits may have shared a common ancestor with that trait. As we learn more detail about organisms, more traits can be used for comparison. Since the days of Cesalpino, the characters or traits used for classification have been morphological. But with DNA sequence analysis, the number of characters describing an organism increases astronomically because the genome can be much more finely analyzed for differences than can the morphological traits for it codes.

Relationships between shared traits can be depicted diagrammatically with the cladogram. Figure 1.1 in the textbook shows a cladogram of important plant evolutionary traits. It shows an ancestral tree, where the branches on the tree, or clades, include a group of species related by a shared character derived through evolutionary change, a shared derived character. Those characters that the species share with earlier ancestors are called shared primitive characters. For example, when plants developed the ability to colonize land, those adaptations were shared derived characters of the land plants. They also had a shared primitive character with the green algae, chloroplasts with chlorophyll a and b. Web Figure 1.2.A also shows how plants fit into a more general cladogram of living organisms. 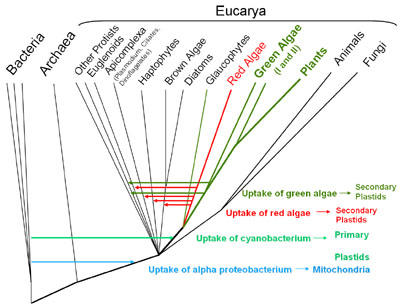 Web Figure 1.2.A. Cladogram of the three domains of living organisms, Bacteria, Archaea, and Eukarya (Woese et al. 1990), showing where plants fit into the evolutionary scheme. Included are the endosymbiotic events that are known to have occurred. (Courtesy of Dr. J. Peter Gogarten, Dept. of Molecular and Cell Biology, University of Connecticut). The common ancestor of all the organisms first gave rise to the Bacteria and the common ancestor of the Archaea and the Eukarya. The Archaea branch off from the Eukarya lineage. The Eukarya common ancestor acquires mitochondrial endosymbiont (an alpha-proteobacterium-like cell). A heterogeneous group of eukaryotes called protists branch off the lineage leading to plants, fungi, and animals. The common ancestor of fungi and animals form a branch, followed by a divergence into the fungal and animal lineages. The common ancestor of plants, green algae, red algae, and glaucophytes acquires chloroplast endosymbiont (a cyanobacterium). The three lineages of glaucophytes, red algae, and green algae diverge. Various lineages of protists acquire chloroplasts via green or red algal endosymbionts. The earliest branch of green algae (Green Algae I) diverge. The later branch of green algae (Green Algae II, Characeae, Coleochaetales) diverge. The remaining lineage leads to plants.

The Eukarya include the eukaryotes, organisms whose cells contain a true nucleus. The Bacteria, or eubacteria, which include the cyanobacteria, lack a true nucleus and are therefore prokaryotic. The Archaea, or archaebacteria, are also prokaryotic, but they differ from the Bacteria. Aside from their morphological and biochemical differences, they are often adapted to extreme environments, such as sulfur hot springs or saline ponds. Phylogenetic studies have indicated that the Archaea and Eukarya split after the Bacteria separated from the common ancestor. Thus, Archaea and Eukarya represent sister groups. This closer relation between Archaea and Eukarya is reflected in their similar promoter structures and RNA polymerases, the presence of histones, and many other characteristics.

Fungi were formerly classified as algal-like plants that had lost their chloroplasts. However, as the cladogram in Web Figure 1.2.A shows, fungi and animals branched off from the Eukarya lineage before the appearance of chloroplasts. They are thus more closely related to animals than to plants. Fungi are heterotrophic; that is, they depend on other organisms for their food, and they satisfy their nutritional needs by absorbing inorganic ions and organic molecules from the external environment. Most fungal species are filamentous and possess cell walls made of chitin, the same substance that is found in insect exoskeletons.

Interestingly, genetic differences are often shown in terms of two-way branches or dichotomies—a choice between two different forms of a gene or set of genes. This produces branched evolutionary phylogenetic trees. Phylogenetic trees, like the dichotomous keys used for identification, are artificial. Like dichotomous keys, they are very useful for communicating certain relationships between organisms. A recent phylogenetic tree of the plant kingdom is shown in Web Figure 1.2.B. 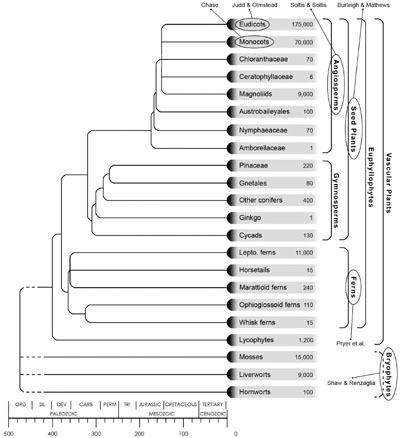 Web Figure 1.2.B Phylogenetic Tree of the plant kingdom, with approximate time scale on the horizontal axis. Modified from: Palmer, J. D. et al. 2004. The plant tree of life: an overview and some points of view. Am. J. Bot. 91, 1437–1445. (Courtesy of Dr. Jeffrey D. Palmer, Department of Biology, Indiana University, Bloomington.)

Bryophytes are small (rarely more than 4 cm in height), very simple land plants, and the least abundant in terms of number of species and overall population. Bryophytes do not appear to be in the direct line of evolution leading to the vascular plants; rather, they seem to constitute a separate minor branch. Bryophytes include mosses, liverworts, and hornworts. These small plants are adapted to life on land, but have life cycles that depend on water during the sexual phase (see Figure 1.2 of the textbook). Water facilitates fertilization, the fusion of gametes to produce a diploid zygote. Bryophytes have neither true roots nor true leaves, they lack a vascular system, and they produce no hard tissues for structural support. The absence of these structures that are important for growth on land greatly restricts the potential size of bryophytes, which, unlike algae, are terrestrial rather than aquatic.

The ferns represent the largest group of spore-bearing vascular plants. In contrast to the bryophytes, ferns have true roots, leaves, and vascular tissues, and they produce hard tissues for support. These architectural features enable ferns to grow to the size of small trees. Although ferns are better adapted to the drying conditions of terrestrial life than bryophytes are, they still depend on water as a medium for the movement of sperm to the egg. This dependence on water during a critical stage of their life cycle restricts the ecological range of ferns to relatively moist habitats.

The most successful terrestrial plants are the seed plants. Seed plants have been able to adapt to an extraordinary range of habitats. The embryo, protected and nourished inside the seed, is able to survive in a dormant state during unfavorable growing conditions such as drought. Seed dispersal also facilitates the dissemination of the embryos away from the parent plant.

Another important feature of seed plants is their mode of fertilization. Fertilization in seed plants is brought about by wind- or insect-mediated transfer of pollen, the gamete-producing structure of the male, to the sexual structure of the female, the pistil. Pollination is independent of external water, a distinct advantage in terrestrial environments. Many seed plants produce massive amounts of woody tissues, which enable them to grow to extraordinary heights. These features of seed plants have contributed to their success and account for their wide range.

Two types of cones are present: male cones, which produce pollen, and female cones, which bear ovules. The ovules are located on the surfaces of specialized structures called cone scales. After wind-mediated pollination, the sperm reaches the egg via a pollen tube, and the fertilized egg develops into an embryo. Upon maturation, the cone scales, which are appressed during early development, separate from each other, allowing the naked seeds to fall to the ground.

Angiosperms, the more advanced type of seed plant, first became abundant during the Cretaceous period, about 100-million years ago. Today, they dominate the landscape, easily outcompeting their cousins, the gymnosperms. About 250,000 species are known, but many more remain to be characterized. The major innovation of the angiosperms is the flower; hence they are referred to as flowering plants. There are other anatomical differences between angiosperms and gymnosperms, but none so crucial and far-reaching as the mode of reproduction.