Essay 8.1 Modulation of Phosphoenolpyruvate Carboxylase in C4 and CAM Plants

Essay 8.1 Modulation of Phosphoenolpyruvate Carboxylase in C4 and CAM Plants

The CAM and C4 mechanisms we discussed in Chapter 8 require the separation of the initial carboxylation from the subsequent decarboxylation, to avoid a futile cycle. Therefore, three well-defined processes are necessary for the assimilation of CO2 into organic compounds:

(2) the transport of the latter compound to the chloroplast where its decarboxylation releases CO2 for assimilation by rubisco in the Calvin cycle, and

(3) the regeneration of the three-carbon compound in the cytosol for restarting the assimilatory cycle.

Although the two types of plants exhibit large differences in metabolites that participate in the second and third steps, they share a common mechanism for the first, i.e., the irreversible β-carboxylation of phosphoenolpyruvate (PEP) by HCO3- with the concurrent production of oxaloacetate and orthophosphate that is catalyzed by the enzyme phosphoenolpyruvate carboxylase (PEPCase) in the presence of Mg2+ (Figure 1). Experiments using 18O-labeled HCO3- indicate that PEPCase, a homotetramer with a 110 kDa subunit, catalyzes the efficient incorporation of two equivalents of 18O in the γ-carboxyl group of oxaloacetate and one in orthophosphate. 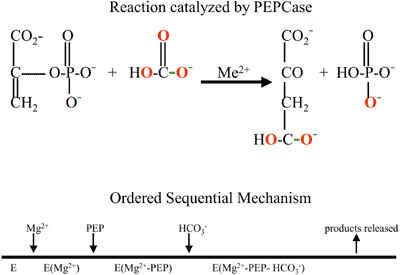 Figure 1   The reaction catalyzed by PEPCase. The production of oxaloacetate [OAA] and orthophosphate [Pi] requires the ordered incorporation of substrates phosphoenolpyruvate [PEP] and HCO3– and the cofactor Mg2+, to the enzyme [E] for the formation of the quaternary complex [E- Mg2+- PEP - HCO3–-]. The first (rate-limiting) step is the transfer of the phosphate for the formation of carboxyphosphate, which subsequently decomposes into E-CO2 and orthophosphate. In the final step of the overall reaction, the enzyme-bound CO2 combines with the enolate stabilized by Mg2+ and the reaction proceeds to the release of OAA and Pi.

Precise initial velocity studies revealed that the reaction proceeds through an ordered mechanism in which the enzyme first binds Mg2+, subsequently PEP, and finally HCO3- (Maruyama et al. 1966; Jane et al. 1992). The very low Km for HCO3- (in the micromolar range) facilitates both the fixing of atmospheric CO2 at night in CAM plants and the recapturing of photorespiratory CO2 during the day in C4 plants. Malate is a competitive inhibitor (Ki = 0.17 mM) when PEPCase is assayed at pH 7.3 in the presence of 1 mM PEP (Chollet et al. 1996; Vidal and Chollet et al. 1997). However, the allosteric activator glucose 6-P (Ka = 1.3 mM) not only increases the affinity for the PEP but also relieves the inhibition by malate. The high dependence of these effects on pH suggests that, in vivo, negative and positive effectors act in concert with cytosolic pH in fine-tuning the activity of PEPCase.

In addition to the spatial and temporal separation exhibited by CAM and C4 plants, respectively, a futile cycle is avoided by the regulation of PEPCase. The PEPCase is "switched on" (active) during the night in CAM plants and during the day in C4 plants. In both plant types, PEPCase is inhibited by malate and activated by glucose-6-phosphate. In CAM plants, the upregulation at night and downregulaton during the day of PEPCase parallels the fixation of atmospheric CO2 and the titratable acidity of the leaf (Leegood and Osmond 1990). Experiments under continuous light or darkness revealed that, not only diminished sensitivity to malate but also an endogenous circadian rhythm, is responsible for the periodic activity of PEPCase. In contrast, in C4 plants the activating agent is light, which reversibly activates the enzyme in vivo. In both CAM and C4 plants, the phosphorylation of a single serine residue in the N-terminal region of the 110 kDa subunit renders PEPCase less sensitive to inhibition by malate, more sensitive to activation by glucose-6-P and, as a consequence, more active in the catalytic process. Germane to this particular phosphorylation is the PEPCase-kinase (PEPCase-K, ca. 33 kDa) which has high affinity for both CAM and C4 PEPCase but lacks the capacity to phosphorylate heterologous substrates or PEPCase mutants in which functional serines of the N-terminal region are mutated (Figure 2). 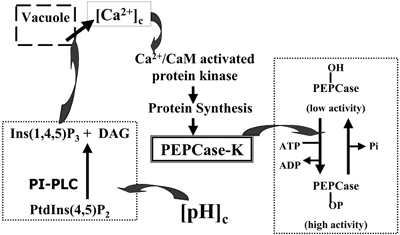 Figure 2   Working model for the modulation of PEPCase in C4 and CAM plants. First, the alkalinization of the cytosolic pH stimulates the conversion of phosphatidylinositol-4,5-bisphosphate [PtdIns(4,5)P2] to inositol-1,4,5-trisphosphate [Ins(1,4,5)P3] and 1,2-diacylglycerol [DAG] in a reaction catalyzed by the phosphoinositide-specific phospholipase C [PI-PLC]. Subsequently, the Ins(1,4,5)P3 drives the tonoplast to enhance the cytosolic concentration of Ca2+ thereby activating a Ca2+/calmodulin-dependent protein kinase. Finally, the latter kinase directly or indirectly enhances protein synthesis with the consequent increase in expression of the PEPCase-K gene.

The parallel induction of both PEPCase and PEPCase-K during the transition from C3 to CAM metabolism elicited by salt stress in Mesembryanthenmum crystallinum provides further support to the close linkage between the enzyme and the associated kinase (Nimmo 2000). Studies with both leaves and mesophyll cell protoplasts of M. crystallinum stressed with high salt indicate that the apparent discrepancy resides in variations of a common central mechanism (Bakrim et al. 2001). Drugs that inhibit (1) the activity of phosphoinositide-specific phospholipase C; (2) the functioning of the tonoplast Ca2+-channel; (3) the activity of Ca2+/calmodulin-dependent protein kinases; and (4) cytosolic protein synthesis concurrently block the up-regulation of PEPCase-K and the phosphorylated (active) PEPCase. These collective findings suggest the functioning of a signal transduction cascade in which phosphoinositide-specific phospholipase C catalyzes the production of the second messenger inositol-1,4,5-trisphosphate [phosphatidylinositol-4,5-bisphosphate → 1,2-diacylglycerol + inositol-1,4,5-trisphosphate] for the stimulation of the Ca2+ efflux from the vacuole to the cytosol (see Figure 2). Upon the increase of Ca2+ in the cytosol, a Ca2+-dependent protein kinase(s) is believed to stimulate either the translation of the PEPCase-K mRNA or a putative activation factor, via phosphorylation. The most probable elicitor to trigger the operation of this signal transduction cascade is cytosolic pH because the up-regulation of PEPCase-K and the associated phosphorylation of the up-regulation of PEPCase are highly stimulated by the alkalinization of the cytosol. As these events operate under illumination in C4 plants and in the dark in CAM plants, it becomes evident that, at the time of CO2 fixation, different metabolic signals should trigger changes in pH. Currently, 3-phosphoglycerate—generated by photosynthesis—and malate—transported across the tonoplast—have been suggested as messengers for inducing the alkalinization of cytosolic pH, thereby up-regulating the PEPCase-K of C4 and CAM plants, respectively.

In CAM plants, transcripts of the Ppck gene that codes for PEPCase-K accumulate mainly at night, causing the accumulation of PEPCase-K and the consequent phosphorylation of PEPCase (Figure 3). CAM plants contain further levels of regulation for the photosynthetic process. Salt- and drought-stress induce the rapid expression of both the Ppc and the Ppck genes that code for PEPCase and PEPCase-K, respectively. Moreover, a circadian oscillator enhances the cytosolic concentration of malate by increasing its efflux from the vacuole, thereby lowering Ppck gene expression, PEPCase-K activity, and PEPCase phosphorylation (low catalytic capacity PEPCase) (Borland and Taybi 2004). At night, the oscillator switches the malate flux across the tonoplast and, as a consequence, reverses these three concurrent events (high catalytic capacity PEPCase). Hence, the concerted action of the circadian oscillator and metabolites contributes to the day/night modulation of CAM PEPCase. C4 plants do not exhibit this behavior but instead up-regulate the PEPCase-K and the associated phosphorylation of PEPCase (high catalytic capacity PEPCase) by a light-dependent transduction cascade (Giglioli-Guivarc′h et al. 1996; Coursol et al. 2000). 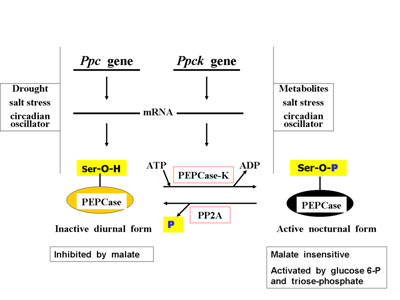 Figure 3   Diurnal regulation of CAM PEPCase. Phosphorylation of the serine residue (Ser-OP) yields a form of the enzyme relatively insensitive to malate that is active at night. During the day, the dephosphorylation of the specific serine (Ser-OH) by the phosphatase (PP2A) gives a form of the enzyme, which is inhibited by malate. Associated to this process environmental factors and a circadian oscillator modulate the expression of both the Ppc and the Ppck genes that code for PEPCase and PEPCase-K.