Chloroplasts are dynamic organelles within the plant cell. Movement of entire chloroplasts to maximize light absorption was observed long ago by light microscopy (see textbook, Figure 9.14). Chloroplasts are surrounded by an envelope membrane, which sometimes appears to circulate around the main body of the organelle. Long thin protuberances sometimes form and extend from the main plastid body into the cytosol, occasionally touching and fusing with projections extending from other chloroplasts (Kohler et al., 1997b; Movie 1). For many years these tubular structures, which are now termed stromules, were neglected as a feature of chloroplasts because they are not present on all chloroplasts, are often not preserved in thin sections prepared for electron microscopy, and are difficult to observe by light microscopy. While occasional reports of envelope movement (described as a "mobile jacket") and chloroplast extensions appear sporadically in the literature of the 20th century (Gray et al., 2001), the most convincing documentation of their existence was provided by S. Wildman and colleagues in the 1960 quote s (Wildman et al., 1962). After preparation of thin hand-sections of leaf cells, motile chloroplast protuberances were clearly documented by filming living cells in the phase microscope (Hongladarom et al., 1964). Since then, similar structures have been detected by light microscopy of the single-cell eukaryotes Euglena gracilis (Ehara et al, 1990) and Acetabularia (Menzel, 1994).

Movie 1   Time-lapse series of GFP-labeled plastids in transgenic tobacco. One image was collected every 4 seconds in a BioRad MRC600 confocal microscope. The movie plays at 20 × actual time. Note a prominent stromule between two chloroplasts, which breaks apart during image collection. Green fluorescent bodies appear to move within the long stromule. Click the image to view the movie. (Movie is in QuickTime format and requires the QuickTime Player plugin, which can be installed from the Apple website.)

Not until plastids could be labeled in vivo with green fluorescent protein (GFP) could stromules be readily observed on both chloroplasts and non-green plastids. The cloning of the gene for GFP, a protein from the jellyfish Aequorea victoria that fluoresces with no exogenous cofactor, has revolutionized studies of intracellular organelle and protein movement. The GFP coding sequence may be attached to another protein coding region and the resultant chimeric gene can be introduced into a genome to specifically label a protein or subcellular compartment (Hanson and Köhler, 2001).

The first experiment to label chloroplasts in vivo with GFP utilized a nuclear transgene carrying a chloroplast transit sequence fused to the GFP sequence. When the chimeric protein was synthesized in the transgenic plant cell, the chloroplast transit peptide directed the GFP to the chloroplast. It was possible to verify that the GFP was present in the chloroplast by first illuminating a plant cell with blue light that causes GFP to fluoresce green (Figure 1, left). Filters allowed visualization of the green light that was emitted. The same cell was then illuminated again, and by using a different set of specific filters, only the red emitted light was collected and displayed (Figure 1, right). Merging the two images reveals that chlorophyll and GFP are both present in the main plastid body. However, only GFP, not chlorophyll, was detected in projections extending from the plastid body (Figure 1, middle). These projections are not observed on chloroplasts of most leaf cells. Nevertheless, if the GFP-encoding gene is expressed at sufficiently high levels, visual searching through a transgenic leaf will usually reveal at least a few cells containing chloroplasts with motile stromules. The absence of chlorophyll indicates that few, if any, thylakoid membranes enter the protuberance, hence the term "stroma-filled tubule" or stromule. 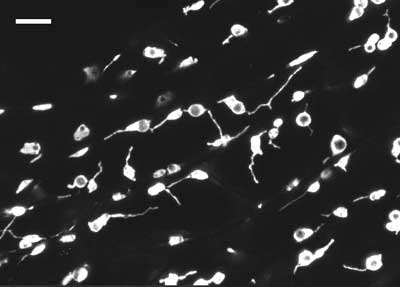 Figure 2   Confocal micrograph of GFP fluorescence (white) of a tobacco petal cell containing GFP targeted to chromoplasts. Dark inclusions within some of the plastid bodies may be carotenoids. Bar equals 10 µm.

Before the era of GFP technology, non-green plastids were difficult to observe in vivo by light microscopy because they lack the green chlorophyll label. Non-green plastids may accumulate pigments (chromoplasts) or starch (amyloplasts), depending on the tissue where they are located. Electron micrographs of plastids in non-green tissues have sometimes revealed organelles whose appearance differs from the typical ovoid chloroplasts. Fluorescence microscopy of a variety of organs of GFP-labeled transgenic plants makes it evident that non-green plastids are often irregular in shape and are much more likely to carry stromules than are chloroplasts. In some tissues, virtually every plastid is comprised partly of long thin tubular structures. Most cells in the tobacco petal (Figure 2), root, and hypocotyl contain plastids that exhibit stromules (Köhler and Hanson, 2000). Most cultured cells that are relatively large compared to other plant cells have very long and abundant stromules that extend to the cell periphery (Movie 2).

Movie 2   Plastid bodies and stromules labeled with GFP in a transgenic tobacco suspension culture cell. Optical sections were taken by confocal microscopy through a single cell and assembled in a stack, processed for three-dimensional display. Click the image to view the movie. (Movie is in QuickTime format and requires the QuickTime Player plugin, which can be installed from the Apple website.)

Proteins, and presumably smaller molecules, are known to move within stromules. A Fluorescence Loss After Photobleaching (FRAP) experiment proved that GFP could move from one plastid to another. In the FRAP experiment, the fluorescence of GFP in one of two interconnected plastids was destroyed by bleaching the GFP by a quick pulse of high-level light irradiation. The plastid that lost fluorescence by photobleaching became fluorescent again quickly when GFP flowed from the unirradiated plastid through the stromule to the bleached plastid (Köhler et al., 1997a). A technique termed Fluorescence Correlation Spectroscopy (FCS) could be used to measure the rate of movement of GFP molecules in stromules. FCS experiments revealed that GFP moves both actively and by diffusion through stromules, and that the stroma is very viscous. Both single molecules and batches of multiple GFP molecules, perhaps located within vesicles, could be detected (Köhler et al., 2000). The brightly fluorescence points visible on the stromule in Movie 1 may represent such GFP "batches."

Now that the widespread presence of stromules has been documented in many types of plant tissues and species, we face the challenge of understanding their function. Stromules could possibly play a role in plastid movement, especially in extremely large cells such as those of Acetabularia. Stromules also increase the surface area of the plastid envelope, which is actively engaged in import and export of molecules to and from the cytoplasm. The presence of stromules increases the surface area and extends the reach of an individual plastid to a part of the cell away from the main plastid body. Stromules potentially could act as conduits of materials from one part of the cell to a plastid body located elsewhere. Stromules may also be involved in intracellular coordination because they are often located close to other organelles such as mitochondria and nuclei, and sometimes connect different plastids to one another.

Ehara, T., Osafune, T., and Hase, E. (1990) Interactions between nucleus and cytoplasmic organelles during the cell cycle of Euglena gracilis in synchronized cultures. IV. An aggregate form of chloroplasts in association with the nucleus appearing prior to chloroplast division. Exp. Cell Res. 190: 104–112.

Menzel, D. (1994) An interconnected plastidom in Acetabularia: Implications for the mechanism of chloroplast motility. Protoplasma 179:166–171.