Transient changes in intracellular Ca2+ concentration are elicited in plants by virtually all biotic and abiotic stimuli. These Ca2+ signals are transduced by a family of proteins that bind Ca2+ using amino acid sequence motifs known as EF-hands. Calmodulin (CaM) is the most highly expressed and broadly distributed member of the EF-hand family of Ca2+-signal transducer proteins. CaM is a ubiquitously expressed, 17-kD protein with no catalytic activity that can bind and modulate the activities of a broad array of target proteins. Although the amino acid sequences of plant and animal CaMs are highly conserved (>90% identity), many of the prototypical enzymes regulated by CaM in animals, most notably a family of protein kinases and phosphoprotein phosphatase type 2B, are absent in plants. The proteins bound by CaM in plants include transcription factors, receptor and intracellular protein kinases, F-box proteins, ion channels, RNA-binding proteins, and proteins of unknown function; CaM regulation of many of these proteins is unique to plants. This essay describes how a small protein like CaM can interact with such a broad array of cellular proteins and how these protein-protein interactions act to transduce changes in Ca2+ concentration into a complex web of biochemical responses.

Ca2+ as a Signaling Molecule

Ca2+ is a second messenger that is used universally in eukaryotes as a mediator of stimulus-response coupling. In plants, intracellular Ca2+ concentration increases in response to many stimuli, including phytohormones, mechanical, osmotic, temperature and oxidative stresses, and microbial elicitors. Ca2+ signals are transient because Ca2+-transporting pumps and energy-driven co-transporters quickly remove the ion from the cytosol. Ca2+ signals also vary spatially as transport pathways that generate Ca2+ fluxes have been reported across all plant membranes. Thus, receptors for Ca2+, like CaM, are widely distributed and bind the ion selectively and rapidly to transduce temporally and spatially complex signals and communicate them to other components of the cell. Because various stimuli trigger Ca2+ fluxes from different compartments via different pathways, specific spatial and temporal changes in Ca2+ concentration, referred to as Ca2+ signatures, appear to be generated by different stimuli (McAinsh and Pittman, 2009). The unique properties of CaM in conjunction with different target proteins are thought to play a critical role in transducing Ca2+ signatures into specific cellular responses.

The information encoded in Ca2+ signals is transduced by proteins that specifically bind the ion in the nM to μM range in the presence of much greater concentrations of other metal ions, particularly Mg2+, which is present at mM levels. CaM is the most highly expressed and broadly distributed Ca2+-binding protein and it belongs to the EF hand protein family. The primary structure of CaM is highly conserved in multicellular eukaryotes (≥ 90% amino acid sequence identity), but less well conserved in unicellular eukaryotes such as yeast and Chlamydomonas. Alignments of CaM sequences from higher and lower plants, algae, yeast and mammals can be seen in supplementary Figure 1. With the exception of yeast, all CaM proteins possess 4 EF hands and bind 4 Ca2+ ions. An EF hand consists of a loop of 12 amino acids flanked by short α-helices. Five amino acid residues in the loop coordinate a single Ca2+ ion. A key feature of EF hands that acts to facilitate Ca2+- over Mg2+-binding is the presence of a glutamate (E) residue in position 12 of the loop (McCormack et al., 2005). The structure of CaM is shown (Figure 1), and a more detailed on line tutorial can be found at: http://www.life.illinois.edu/zielinski/cam.html. It should be noted that the molecular models in this tutorial require the use of Internet Explorer as a browser and the Chime plug-in.

Figure 1   (A) The structure of Ca2+-CaM (structure code 3CLN). Ca2+-binding domains are numbered I through IV, beginning from the amino-terminus. There are two Ca2+-binding sites located at either end of the molecule joined by a linker domain (LD). Note that this dumbbell-shaped structure is an artifact resulting from conditions used to crystallize the protein that favored a helical structure of the LD. (B) CaM complexed with the binding domain peptide (P) from rabbit smooth muscle myosin light chain kinase (structure code 2BBN). The structural features of CaM are labeled as in A. The LD acts as a flexible tether to allow CaM to interact with the target peptide by wrapping around it. In this end-on view of the structure, the channel formed by CaM through which the MLCK peptide runs is lined with hydrophobic residues.

When Ca2+ is bound by the EF-hands of CaM, conformational changes occur that expose hydrophobic surfaces on the molecule. These hydrophobic regions, in concert with a flexible linker domain, facilitate interaction of CaM with a wide array of target proteins. The fact that the majority of interactions between CaM and its target proteins are hydrophobic is crucial to Ca2+ signaling because it allows CaM to interact with a wide array of proteins. There is no consensus amino acid sequence for CaM binding. Rather than recognizing a specific amino acid sequence, CaM binds 10 to 30 amino acid residue sequences in proteins that tend to form amphipathic α-helices (Yamnuik and Vogel, 2004, Bouche et al., 2005). The most common sequences have been termed 1-8-14, 1-5-10 and 1-12 motifs, which refer to the placement of hydrophobic amino acid residues within the sequences. Sequence-independent binding by CaM makes predicting whether CaM will interact with a specific protein problematic. However, there is an excellent web-based tool for making such predictions at: www.calcium.uhnres.utoronto.ca/ctdb/pub_pages/search/index.htm.

CaM interaction with target proteins was initially shown to occur with a 1:1 stoichiometry (see Figure 1B). However, atomic level structures have now been resolved that also reveal CaM: target protein complexes of 1:2 and 2:2, which stabilize protein dimers in some CaM target proteins (Yamnuik and Vogel, 2004). In the 1:1 stoichiometry, CaM may displace an autoinhibitory domain from the active site of an enzyme, it may remodel the conformation of an active site, or it may compete with another signaling molecule (for example, a cyclic nucleotide) for a binding site on a target protein. In each of these interaction mechanisms CaM binding alters target protein activity in response to changes in intracellular Ca2+ concentration (Bouche et al., 2005). To facilitate most interactions with target proteins, regardless of stoichiometry, the central region of CaM forms a random coil. In the case of 1:1 interactions, the globular domains at the N- and C- terminus of CaM wrap around and engulf the target peptide (see Figure 1B), while in 1:2 interactions, the N- and C- terminal “halves” of CaM independently interact with short peptide sequences in different target protein polypeptides.

Ca2+ signaling is often described as an ordered process in which elevated Ca2+ levels in cells are bound by CaM followed by binding of the Ca2+-CaM complex to target proteins, which modulates their activities and results in a physiological response. However, Ca2+ signaling mediated by CaM is much more dynamic and flexible than that description implies for at least three reasons: 1) Ca2+ levels in cells are never zero; this means that there are always low levels of Ca2+-CaM-target protein complexes present. Although CaM is present at μM levels in many or most cells, the total concentration of CaM target proteins is greater than the concentration of CaM. Because of this there is very little free CaM in most cells and its movement is restricted; this means that spatially restricted Ca2+ signals can be transduced in a specific microdomain with in a cell. 2) Interaction with target proteins by CaM raises the affinity of CaM for Ca2+; this sensitizes the activity of the CaM-target protein complex to changes in Ca2+ concentration. 3) Perhaps most importantly, different target proteins sensitize Ca2+ binding by CaM to different extents; this means that activities of different CaM target proteins are activated maximally in response to different Ca2+ concentrations. Taken together these observations support the idea that even the most rapid changes in intracellular [Ca2+] can be transduced by CaM in specific regions of cells.

Because CaM is ubiquitously expressed and has no enzymatic activity of its own, the signaling pathways initiated by CaM and the physiological responses they elicit are derived from the expression patterns and activities of the proteins regulated by CaM. Since different cells and tissues express different profiles of CaM target proteins and each protein has a distinctive activity response to Ca2+-CaM, different Ca2+ signatures will elicit characteristic patterns of CaM-regulated activity (Figure 2). Thus, comprehensively identifying the proteins regulated by CaM is crucial for understanding how Ca2+ signals are transduced through CaM. Conventional methodologies, like affinity chromatography, expression library screening and yeast two hybrid assays succeeded in identifying about 40 proteins in plants that interact with CaM. However, knowledge in this area advanced tremendously when Arabidopsis protein arrays coupled with transient expression and co-immunoprecipitation assays identified over 170 proteins that interact with CaM or CaM-like (CML) proteins (Popescu et al., 2007). Previously known and novel target proteins were identified in this study that included transcription factors, receptor and intracellular protein kinases, and F-box proteins that are known to participate in responses to biotic and abiotic stimuli, and as well as proteins of unknown function. The broader significance is that the CaM-interacting target proteins identified in this work may be potential nodes for cross-talk between Ca2+ signals and signaling pathways regulated by hormones, pathogens or abiotic stresses. Experimentally testing these possibilities should provide important new insights into the mechanisms by which Ca2+ signaling is woven into the fabric of cellular responses that modulate plant growth and development. 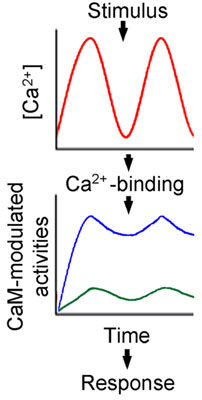 Figure 2   Schematic model of Ca2+ signaling via CaM. A stimulus (top, in red) that produces Ca2+ oscillations of a certain amplitude and frequency will activate different CaM-regulated proteins differentially (bottom, in blue and green) depending on the relative affinities of the CaM-target protein complexes, the abundance of the target proteins and the degree of activation mediated by CaM. The combination of these activities in conjunction with other signaling pathways triggered by the stimulus yields the ultimate physiological response to the stimulus.