Essay 5.2 From Meals to Metals and Back

Essay 5.2 From Meals to Metals and Back

In the 1800's, on the German-Belgian border, a German botanist observed that leaves of Thlaspi calaminare, more recently classified as Thlaspi caerulescens, contained extraordinarily high levels of zinc. This serendipitous observation made over 100 years ago, led to a completely unpredictable outcome—the development of a new field of environmental biotechnology. This new field, known as phytoremediation, involves the use of trace element accumulating plants to remove inorganic pollutants from the environment. Plant mineral nutrition (see textbook Chapter 5), a much older field of study than phytoremediation, has also turned its attention towards enhancing the ability of plants to more efficiently accumulate mineral nutrients from the soil. This effort has been directed at both reducing the amount of mineral fertilizer input into the agricultural system, and at alleviating human diseases caused by deficiencies in plant derived, essential micronutrients, such as Fe, Zn, and Se. The interesting convergence of these two fields led to the realization that phytoremediation and enhanced mineral nutrition are two sides of the same coin; taking our use of plants full circle from meals to metals and back.

For centuries, humans have been fascinated by the almost magical ability of plants to grow and reproduce on the simplest of materials—sunlight, air, water, and minerals. As part of this conjuring act, plant roots obtain from the soil trace minerals such as Cu, Fe, Mn, Mo, Ni, Se, and Zn. Though these elements are essential (see textbook Table 5.1), they are also potentially toxic, so plants possess complex biochemical mechanisms to control them. For reasons not yet clear, plants also have the ability to acquire and detoxify non-essential elements such as As, Cd, Cr, and Pb. The majority of plants grown in metal-enriched soils have mechanisms that exclude these potentially toxic metals from their shoots using their roots to either pump metal ions back into the soil (van Hoof et al., 2001) or store them in their root vacuolar compartment (Chardonnens et al., 1999).

On the other hand, plants have the extraordinary ability to hyperaccumulate metals in their shoots. For example, some plants can accumulate up to 3% (30,000 ppm) of their shoot dry weight as Zn while growing in their native habitat (Figure 1). This accumulation is 300-fold higher than what most "normal" plants require for healthy growth! Remarkably, plants can also hyperaccumulate As, Mn, Ni, and Se (Figure 1). These plants are called metal hyperaccumulators. The reason these plants contain such high levels of these elements still eludes biologists; however, there is some evidence that metal hyperaccumulation protects plants from insect herbivores. The unusual habit of hyperaccumulation has led to a New Caledonian tree (Niemeyera [formerly Sebertia] acuminata) being locally named "sève bleue," because its sap is blue-green due to the excess Ni it contains (25% of its dry weight) (Figure 1). An "urban legend" contends that the mighty General Custer was defeated by a Se hyperaccumulating plant. Apparently his defeat was in part due to the late arrival of reinforcements that were delayed by pack animals seemingly suffering Se-induced lameness caused by eating too many Se-enriched Astragalus plants. 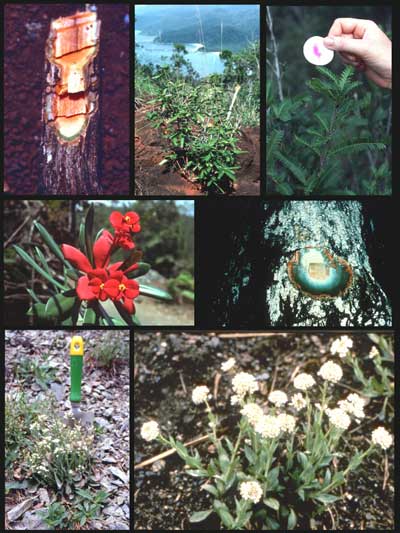 The more recent discovery of arsenic hyperaccumulation by the fern Pteris vittata seems even more bizarre. In early literature, there are reports of arsenic compounds being used to help reduce fever, Black Death, boils, and even improve general appearance and "well-being." However, arsenic is most known for its toxicity, which was recognized even by the ancient Greeks, who preferred to have "dispensable" slaves work their mines.

As societies industrialized and developed sources for a plentiful and stable food supply, pollution has become an increasing problem. The recent interest in using metal tolerant and hyperaccumulating plants to remediate some of these environmental problems may help to contain or even reverse these pollution problems. However, it is important not to overstate the possible benefits of this approach, one recent success is noteworthy. Scientists have developed cultivars of naturally occurring Ni hyperaccumulating plants for commercial Ni "phytomining." An assessment of the impact of this development is awaiting publication of these findings in the peer-reviewed literature. (See www.ars.usda.gov/is/pr/2002/020109.htm.)

The basic idea that plants can be used for environmental remediation is old and cannot be traced to any particular source. However, the convergence, in the 1980's and early 1990's, of work on plant metal tolerance and plant metal hyperaccumulation led to the realization that plants could be used to phytoextract pollutant metals from the soil. The roots of this research are deeply embedded in the geobotanical, agricultural and mine site restoration literature, with various seminal discoveries and rediscoveries of metal hyperaccumulation and tolerance. In "The Essential Qualities" Bradshaw et al. (1990), discusses the "curious and unimportant character" of how plants adapt to elevated concentrations of trace metals in their environment. Bradshaw and co-authors found the study of plant metal tolerance to be a valuable tool for the investigation of natural selection in plants. However, in the subsequent twelve years since the publication of this article, the "curious and unimportant character" of metal tolerance has attracted much attention. What do we know about its physiological, biochemical, and molecular nature?

There has been extensive debate about the possibility that the enhanced uptake of Zn2+ and Cd2+ observed in Thlaspi caerulescens is related to an ability to solubilize these metals in the rhizosphere. However, recent evidence suggests that this may not be the case (Hutchinson et al., 2000; Whiting et al., 2001). What appears to be true is that the increased uptake of Zn2+ and Cd2+ is due, at least in part, to the over expression of particular root plasma membrane ion transporters including the Zn transporter ZNT1 and ZNT2 (Pence et al., 2000; Assunção et al., 2001) and the potential Cd transporter TcIRT1-G (Lombi et al., 2002). Little is known about the mechanism of metal ion translocation to the shoot, though it was suggested that coordination of the metal ion with free histidine may play a role (Krämer et al 1996). Once in the shoot, the hyperaccumulated metals such as Cd, Ni and Zn accumulate preferentially in either the epidermal or mesophyll cells, depending on the plant species (Kupper et al., 1999, 2000 and 2001). Within these cells metal ions are detoxified by compartmentalization in the vacuole (Kupper et al., 1999; Krämer et al., 2000), where they are most likely coordinated by organic acids (see textbook Figure 13.16) (Krämer et al., 2000; Salt et al., 1999). This compartmentalization appears to involve elevated expression of genes in the cation-efflux family including TgMTP1 (Persans et al., 2001) and ZTP1 (Assunção et al., 2001). The nonmetallic nature of Se and As indicates that hyperaccumulation of these elements also involves chemical reduction (Pickering et al., 2000a and 2000b). Selenium is a chemical analogue of sulfur, so it is further assimilated into selenocysteine, which is then detoxified via methylation of the Se moiety to produce the dead-end metabolite methylselenocysteine (Neuhierl et al., 1999).

As illustrated in the previous paragraph, our understanding of the basic mechanisms of metal tolerance and hyperaccumulation has come a long way in the last 5 years. Several research laboratories worldwide are busy trying to increase our knowledge further. Recently, researchers have focused their attention on various metal hyperaccumulating species, which are close relatives of Arabidopsis thaliana, including Arabidopsis halleri (Macnair et al., 1999). With the A. thaliana genome sequence now available, focus on metal hyperaccumulating Arabidopsis species should open up the powerful approaches of both genetics and genomics to the study of metal hyperaccumulation and tolerance. Such developments are likely to catalyze rapid progress towards a more complete understanding of the molecular basis of this "curious and unimportant character." Emerging knowledge will hopefully lead to fascinating new discoveries and the identification of new plants useful for remediation of metal polluted soils as well as plants with enhanced mineral compositions for improved human nutrition and health.