Plants grow tall where light competition is relatively strong and other essential resources–water and nutrients–are readily available and temperatures are not extreme. Thus, the tallest trees are found in temperate regions having high rainfall, moderate temperatures, and relatively fertile soils. The tallest trees on Earth today are coast redwoods, Sequoia sempervirens, of northern California. A total of 113 living redwoods are over 107 m tall, and the tallest individual is 112.5 m in height (Figure 1). Because 95% of the original redwood forests, including most prime habitat, has been logged, it is likely that individuals taller than today's record holders existed in the past. Anecdotal evidence indicates that individuals of Douglass fir, Pseudotsuga menziesii, from Washington and British Columbia may have exceeded 120 m, and mountain ash, Eucalyptus regnans, of Victoria, Australia may have been as tall as 114 m.

What limits the height growth of trees has long puzzled plant physiologists. The respiratory burden of large support structures, declining nutrient availability, and mechanical failure have all been proposed, but largely dismissed. Recently the "hydraulic limitation hypothesis" of Ryan and Yoder (1997) has sparked interest in whether constraints on the capacity of the hydraulic system to deliver water to upper crown foliage might become increasingly limiting to stomatal conductance and photosynthesis as trees grow taller, thereby reducing carbon availability for further height growth. As trees grow taller, a larger soil-to-leaf water potential gradient is required to overcome the effect of gravity and the increased hydraulic resistance of a longer flow pathway. Low leaf water potential, however, causes a reduction in stomatal aperture, which reduces transpiration and counteracts further reduction in water potential, but also reduces photosynthesis. Why should stomatal conductance be reduced as water potential declines? First, it would act to maintain cell turgor pressure, which is needed for cell expansion. Second, and perhaps more important, it acts to reduce the risk of xylem cavitation, which if unchecked can lead to the death of shoots, branches, or entire trees (Tyree and Sperry, 1988). The postulated mechanism underlying the hydraulic limitation hypothesis of Ryan and Yoder (1997) implies that trees should grow to a physiological "ceiling" height that reflects the tradeoff between turgor maintenance or cavitation avoidance on the one hand and photosynthetic carbon gain on the other, with the balance of these factors being determined by the regulation of stomatal conductance.

To test whether stomatal limitation of photosynthesis might underlie the limits to tree height, we examined patterns of water potential, gas exchange, carbon isotope composition, and xylem vulnerability to cavitation in coast redwood trees at sites along the northern California coast. 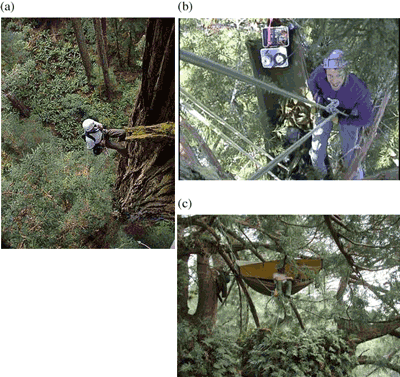 Xylem pressure was strongly correlated with height, both at predawn and at midday when the leaf-to-air vapor pressure difference was highest (Figure 3, Part A). The slopes of the predawn gradients were not significantly different from that necessary to hold water against gravity (ca. –0.01 MPa m–1). Slopes of midday gradients did not differ from predawn gradients during the wet season, but during the dry season were significantly higher for some trees, up to –0.014 MPa m–1, indicative of the increased driving force necessary to move water rapidly through the xylem. Minimum xylem pressures were always above –2.0 MPa in the upper crown, similar to that of other conifers (Pinol and Sala, 2000). 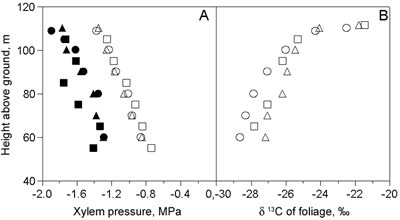 Stomatal conductance and photosynthesis measured at saturating light in the upper crown (ca. 105 m) during the dry season decreased by an average of 43% and 33%, respectively, from mid-morning when air vapor pressure deficit (VPD) and xylem tension were low to mid afternoon when VPD and xylem tension reached their daily maxima. Values of Ci/Ca calculated from gas exchange measurements spanned a range that included the time-integrated estimates based on stable carbon isotope analysis (see below). Thus, stomatal conductance near maximum tree height responds to conditions associated with increasing water stress and is strongly limiting to photosynthesis at midday during the dry season.

Stable carbon isotope composition (?13C) of foliage was strongly and positively correlated with height in all study trees (Figure 3, Part B). Maximum values of nearly –21‰ at the tops of the tallest trees indicate low Ci/Ca ratios similar to those for perennial plants from extremely arid environments. Minimum δ13C within the crown ranged from –27‰ to –31‰ (see textbook, pp. 220–222), values indicating minor stomatal limitation of photosynthesis as occurs in plants from mesic environments.

Mean water potential for 50% cavitation (Ψ50%) was estimated to be –6.1 MPa for all branches measured. In paired branches from upper and lower crown positions in each of 6 trees, lower crown branches were always more susceptible to water-stress-caused-embolism than top branches (Ψ50% lower = –5.6 MPa, upper = –6.6 MPa, paired t-test: df = 5, t = –3.47, p = 0.018). The observed difference in Ψ50% between upper and lower branches was not significantly different from the difference in the hydrostatic component of water potential between these heights (paired t-test: df = 5, t = –1.69, p = 0.15).

What Does It All Mean?

Our results for coast redwood support elements of the hydraulic limitation hypothesis of Ryan and Yoder (1997). We found that water potential increases with height as expected from the cohesion-tension model of water transport in plants (see Web Essay 4.3). Because the slope of this relationship was generally close to the gravitational potential gradient, it appears that the long transport path in tall redwoods does not impose a large amount of resistance to water flow. We note, however, that our study trees are all located in sites where soils are very moist throughout most years. The intercepts of the predawn water potential curves estimate that soil Ψ remained close to 0 MPa even during the dry season. It is likely that redwood trees experience larger soil water deficits on hill slopes and ridge tops, in very dry years, and toward the southern and inland limits of the species' distribution. In such conditions we expect the water potential gradient to be steeper and tree top values of water potential to be lower (more negative) than the minimum of about –2 MPa we measured.

The large apparent safety margin for xylem cavitation in redwood contrasts with a number of other studies (Sperry, 1995) and has several possible explanations. First, xylem cavitation may be irreversible at great heights in tall trees because re-dissolution of gas emboli requires low xylem tensions, within a few tenths of a MPa, a situation that is precluded by the water potential necessary simply to hold water against gravity above a few tens of meters of height. Thus, redwood may be "over engineered" because the consequences of cavitation are particularly severe. Second, the high cavitation resistance of redwood may be advantageous during extreme and long-lasting droughts, which impose water potentials much lower than we have measured in the field. Such dry periods are known to have occurred during the past millennium and within the lifetime of our study trees. Finally, it may be that the hydraulic characteristics of redwood stems are in part byproducts of other features related to extreme height growth, (e.g., wood mechanical properties).

A final interesting note on redwood physiology concerns the role of fog in the water relations of this species. Summer fog characterizes much of redwood's geographic distribution. Dawson (1998) has clearly documented the importance of fog drip for soil moisture and root uptake. Recently, we have measured the capacity for direct foliar uptake of fog in coast redwood. Simulated fog events resulted in a significant increase in water potential compared to foliage covered with aluminum foil to prevent transpiration (Koch et al., unpublished data). Although we do not yet know the quantitative importance of direct absorption of fog, it does represent a means of acquiring water that circumvents the energetic requirement of lifting it from the soil. It is noteworthy that we have observed xylem pressures higher than the hydrostatic gradient following nights of rain or fog. Could it be that foliar absorption provides a mechanism for xylem tension to relax to the point where cavitation reversal is possible? We are confident that further study of coast redwood across a range of environments will answer this question and reveal the critical elements of physiology and functional morphology that affect and are affected by plant size.

Pinol, J., and Sala, A. (2000) Ecological implications of xylem cavitation for several Pinaceae in the Pacific Northwestern USA. Functional Ecology 14: 538–545.