Although plant secondary metabolites are generally associated with plant defense responses against herbivores and pathogens, these unique compounds can be involved in a broad array of ecological functions (Bertin et al. 2003). Plants release secondary compounds into their environment that change soil chemistry, thus increasing nutrient uptake or protecting against metal toxicity (Dakora and Phillips 2002; Hawes et al. 2003). Chemical signals are essential for mediating interactions between plant roots and nonpathogenic soil bacteria, including dinitrogen-fixing bacterial symbionts (Dakora and Phillips 2002; Marx 2004). However, microbes and herbivores are not the only organisms that are influenced by plant secondary metabolites. There is considerable evidence to suggest that plant-derived chemical compounds are also involved in direct communication between plants (Singh et al. 1999; Chamberlain et al. 2001; Bertin et al. 2003; Palmer et al. 2004; Weir et al. 2004). While this phenomenon was first documented in approximately 300 BC by Greek and Roman writers, it was not until 1937 that Hans Molisch coined the term "allelopathy" to describe such plant-plant interactions (Rice 1984; Willis 2004). In the current literature, the term allelopathy can describe any direct or indirect effect of plant chemical compounds on another plant or microbe, although it is most often used to refer to chemical-mediated negative interference between plants (Willis 2004).

Plants use a variety of mechanisms to release secondary compounds into their surrounding environment (Singh et al. 2003). Numerous compounds are released from decomposing plant litter as leachates into the soil. Nearly all living plant tissues actively release secondary compounds as volatiles, such as compounds that generate the scents associated with flowers or pungent leaves, although roots can also actively release volatiles (Steeghs et al. 2004). Finally, plants use up to 30% of their photosynthate in the production of root exudates, which affect the local soil environment, termed the rhizosphere (Bertin et al. 2003). Each of these processes may release chemicals that mediate allelopathic interactions between plants.

Renewed interest in allelopathy has stemmed from the discovery that spotted knapweed (Centaurea maculosa), an invasive exotic weed introduced to North America, releases phytotoxic secondary metabolites into the environment that inhibit the growth and germination of North American plant species (Bais et al. 2002, 2003; Perry et al. 2005b). Spotted knapweed is an outcrossing perennial of the aster family. The weed is native to Europe where it is not a dominant or problematic species. However, in the northwestern United States it has become one of the worst invasive weeds, infesting over 4.5 million acres in Montana alone (Mauer et al. 2001). Spotted knapweed often colonizes disturbed areas in North America, but it also invades rangelands, pastures and prairies, where it displaces native species and establishes dense monocultures (Figure 1). As early as 1962, allelopathic interactions were proposed to be responsible for the aggressive behavior of this weed (Suchy and Herout 1962; Kelsey and Locken 1986). Mounting evidence suggests that spotted knapweed, in addition to containing potentially toxic compounds in its leaves (Kelsey and Locken 1986), also exudes phytotoxins from its roots (Bais et al. 2001, 2002; Ridenour and Callaway 2001). 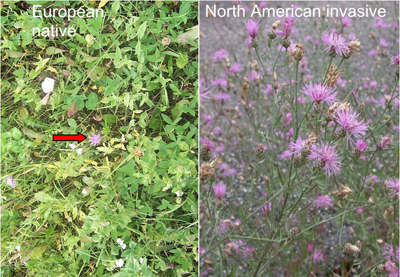 Phytotoxins produced by invasive exotic plants such as spotted knapweed may explain the remarkable success of some of these plants when transported to a new continent. The "novel weapons hypothesis" for plant invasions proposes that some invasive plants produce novel chemicals that are more effective against neighboring species in their new environment than in their native environment (Callaway and Aschehoug 2000; Callaway and Ridenour 2004). While species in the native environment may have evolved resistance to the phytotoxins, species in the new environment have only recently come into contact with the phytotoxins and may not have had time to evolve resistance. Lack of allelochemical resistance in the new range may give some exotic plants a competitive advantage, allowing them to displace native species. To examine the effects of spotted knapweed root exudates on native North American plants, Ridenour and Callaway (2001) used activated carbon to adsorb organic compounds in the soil. Activated carbon reduced the negative effect of spotted knapweed on Idaho fescue (Festuca idahoensis), suggesting that chemicals in spotted knapweed root exudates may give knapweed a competitive advantage over native species. However, to demonstrate the role of allelopathy in spotted knapweed invasion, allelochemicals produced by knapweed had to be identified.

Identifying compounds involved in allelopathic interactions requires complex experimentation, especially when the chemicals of interest are exuded belowground. To isolate and characterize compounds released in spotted knapweed root exudates, plants were grown in sterile liquid media under laboratory conditions (Bais et al. 2002). A bioassay was developed in which media from spotted knapweed cultures was applied to other plants, and effects of the media were recorded over time. Media containing knapweed exudates inhibited the growth and germination of several plant species, suggesting the presence of phytotoxins. To determine which compound(s) in the exudates were responsible for the phytotoxic activity, the media was extracted with organic solvents and fractionated by high performance liquid chromatography (HPLC). These fractions were used in a similar bioassay and the phytotoxic activity was found to be confined to one chromatographic fraction containing a single peak, suggesting that a single compound was responsible for the phytotoxicity. The active fraction was analyzed by nuclear magnetic resonance (NMR) and mass spectrometry (MS) to identify the specific compound of interest.

Identification of the phytotoxin catechin in spotted knapweed root exudates suggests that knapweed may participate in allelopathic interactions. However, it is also necessary to assess the ecological relevance of catechin production. To this end, a number of studies have examined soil catechin concentrations in areas invaded by spotted knapweed. Several studies reported high soil catechin concentrations (mean > 0.5 mg g-1) in spotted knapweed infestations (Bais et al. 2002, 2003; Perry et al. 2005a; Thelen et al. 2005; Weir et al. 2006). However, recent studies have found very low concentrations or no catechin in knapweed-infested soils (Blair et al. 2005; Perry, unpublished data). These inconsistencies could be due to seasonal or annual variation in secretion patterns, differences in soil physical or chemical properties, variation in soil microbial communities, or differences in soil collection, storage and extraction methodologies. Furthermore, phenolic compounds such as catechin tend to oxidize very rapidly (Appel 1993) making quantification of soil catechin difficult and unreliable. The development of new methodologies to sample the actual secretion of plant secondary metabolites over time would improve our ability to measure these compounds in the field.

Laboratory experiments examining the effects of catechin on plant germination and growth suggest that native North American grassland species vary considerably in sensitivity to catechin (Perry et al. 2005b). Further work on two catechin-resistant native species, Gaillardia grandiflora and Lupinus sericeus, suggests that these species may produce root exudates that detoxify catechin (Weir et al. 2006). When catechin-sensitive species are grown in Gaillardia root exudates under laboratory conditions, they become less sensitive to catechin. Further, catechin-sensitive species growing in spotted knapweed-infested fields are more successful when near Lupinus plants. Both Gaillardia and Lupinus exude relatively high concentrations of the organic acid oxalate, which may act as an antioxidant to reduce catechin toxicity. Oxalate concentrations in Gaillardia root exudates increased in the presence of catechin, and application of oxalate to the roots of catechin-susceptible species reduced the effects of catechin (Weir et al. 2006). Identifying catechin-resistant species and understanding the mechanisms of catechin resistance may facilitate the development of more effective spotted knapweed management strategies.

The mechanism by which catechin acts as a phytotoxin at the molecular level remains unknown. Some clues have been obtained by analyzing the effects of catechin on plant roots in the laboratory (Bais et al. 2003). When catechin is applied to susceptible plant roots, cytoplasmic condensation—a signature of cell death—initiates at the root tip and spreads upwards in a wave. After 45 minutes, the entire root tip is dead, as visualized by fluorescence vitality staining. It was hypothesized that this wave of cell death might be accompanied by the accumulation of reactive oxygen species (ROS), as is often found in the plant hypersensitive response to pathogen infections. Using a fluorescent dye to visualize ROS production, it was found that catechin treatment caused an immediate increase in ROS that cascaded up the root, preceding cell death by ten minutes. When strong antioxidants were applied to roots in addition to catechin, no increases in ROS or cell death were observed, suggesting that catechin causes root cell death indirectly by facilitating ROS production. In addition, a spike in intracellular calcium ions (Ca2+) was found 30 seconds after catechin treatment. Ca2+ is an important secondary messenger in many signaling pathways including plant stress response (Orrenius et al. 2003). To understand more about the effect of catechin on these signaling pathways, gene expression analysis was employed (Bais et al. 2003). The model plant, A. thaliana, is susceptible to catechin, making it possible to use microarray analysis to identify gene expression changes in response to this phytotoxin. Ten genes were strongly upregulated in A. thaliana roots ten minutes after catechin treatment, but returned to normal levels after one hour, suggesting that these genes are involved in the plant response to catechin that leads to ROS production and eventually cell death. Of the ten genes identified, four encode transcripts of unknown function. A. thaliana t-DNA mutant lines corresponding to eight of the identified genes are available and may prove useful in understanding how catechin leads to cell death.

Understanding plant secondary metabolite biosynthesis, release, and mechanistic action can provide insights into larger ecological questions.  By using spotted knapweed as a model system, our laboratories are attempting to understand allelopathic interactions and their influence on plant invasion at molecular, physiological, and ecological levels.  Ultimately, the ability to silence the production and secretion of catechin or any other allelochemicals produced by spotted knapweed using transgenic or RNA interference technology will provide a conclusive test of whether allelopathy plays a strong role in knapweed invasion.