Within the last decade at least five families of polypeptide hormones with signaling roles in defense, growth and development, mitogenicity, and reproduction have been identified in plants. These regulatory signals include the systemin family of defense hormones found in the Solanaceae family, SCR, the male determinant of self-incompatibility in Brassica, CLV3, a regulator of shoot apical meristem development, PSK, a small polypeptide involved in mitogenesis of plant cells grown in culture, and RALF, a ubiquitous polypeptide in plants affecting growth and development.

Systemin was isolated from tomato leaves in 1991 as the mobile signal for defense gene activation in the systemic wound response. Characteristics of the 18 amino acid polypeptide and its prohormone precursor, prosystemin, indicated that it possessed analogies to polypeptide hormones found in animals and yeast. Systemin is biologically active at subnanomolar concentrations, specifically processed from near the C-terminus of prosystemin, mobile in the plant vascular tissue, and activates rapidly an intracellular signaling cascade leading to defense gene activation (Figure 1). However, in contrast to animal polypeptide hormones, the systemin precursor is not synthesized through the secretory pathway, but in the cytoplasm. 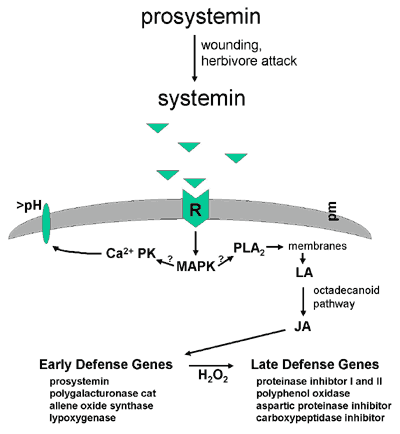 Figure 1   Model for the activation of defense genes in tomato in response to wounding and insect attack. After wounding, systemin is released from its precursor prosystemin by proteolytic processing. Systemin subsequently binds a membrane-bound receptor to initiate an intracellular signaling cascade, including the activities of a MAP kinase, a phospholipase, a calcium dependent protein kinase, an extracellular alkalinization, and the release of linlenic acid from membranes. Linolenic acid is converted to jasmonic acid, a messenger for early defense gene activation. Catalytic activity of polygalaturonase, an early gene, leads to generation of hydrogen peroxide acting as a second messenger for late gene activation. R, receptor; MAPK, MAP kinase; Ca2+PK; calcium dependent protein kinase; PLA2, phospholipase A2; LA, linolenic acid; JA, jasmonic acid; pm, plasma membrane.

Structural features of systemin important for its biological function suggested that its activity was mediated by a systemin-receptor interaction. Substitution of the Pro13 residue in systemin with alanine results in a polypeptide, Ala-13-systemin, which is 100–1000 times reduced in biological activity. The polypeptide has two sets of double prolines, one at positions 6-7 and the second at 12-13, which contribute to a polyproline helix in the central region of the polypeptide observed in solution by CD spectra. The interaction of the polypeptide with its receptor is likely dependent upon the helical orientation of systemin's central residues, and may be similar to the interaction observed in polyproline helices found in SH3 protein-protein interaction domains found in animal receptor proteins. In these cases, the protein-protein interactions are periodic, and contacts between the binding protein and the polyproline helix depend upon the turn provided by the helix.

A biochemical approach was used to identify a systemin receptor. Using a radio-receptor assay and 125I-labeled systemin, a receptor binding site was identified on the surface of Lycopersicon peruvianum suspension cultured cells. Systemin binds to its receptor maximally within minutes and the interaction is very tight and highly specific. With a Kd = 10–10 M, it is clear how systemin can activate defense genes at extremely low concentrations. The total number of receptor molecules per cell is ~2000, which translates to about 5 fmoles per mL of cells, presenting a challenge for biochemical purification of the receptor protein. However, the number of receptors can be dramatically increased by application of methyl jasmonate to the suspension cells. The up-regulation of systemin related signaling genes such as enzymes of the octadecanoid pathway by the downstream messenger methyl jasmonate has previously been observed in tomato plants, and together this suggests that systemin may positively affect its own signaling pathway through transcriptional up-regulation.

To isolate the receptor protein for amino acid sequencing, we determined the molecular weight and subunit composition by photoaffinity labeling (Figure 2). Using the cell based receptor-binding assay already established, a photoaffinity labeling experiment with intact suspension cultured cells and 125I-azido-Cys-3,Ala-15-systemin identified a single protein in the membranes with an apparent Mr of 160 kD. The direct interaction of systemin with the 160 kD protein indicated that the 160 kD protein was the systemin-binding site observed in previous binding studies. Whether this protein, called SR160, is alone responsible for systemin biological activity, or is one component of a larger receptor complex remains to be determined. 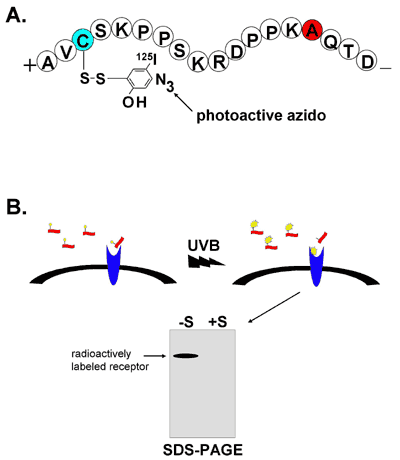 Figure 2   Photoaffinity labeling of the systemin receptor SR160 in membranes of suspension cultured tomato cells. (A) Photoaffinity analog of systemin, 125I-azido-Cys-3-Ala-15-systemin. The photoaffinity cross-linker APDP is coupled to systemin through formation of a disulfide bond at the third position cysteine. The photoactive moiety can be iodinated with radioactive iodine, and the azido group is stable while maintained in the dark. (B) The cross-linked 125I-azido-Cys-3-Ala-15-systemin was added to suspension cells in the dark and allowed to bind the receptor. After receptor binding, a UVB lamp is used to activate the photoactive azido group which reacts with amino acid side chains in the receptor. The polypeptide portion of the cross-linker is removed by reducing agents, leaving a covalently attached radioactive label. Cellular protein are separated by SDS-PAGE and analyzed for radioactively labeled proteins. Specificity for systemin is demonstrated by competing off the labeling with an excess of native systemin (S).

To provide a starting material for purification of the receptor, the photoaffinity labeling assay was bulked up to a large scale procedure. A round container cut from the bottom of a plastic waste container was filled with 1 liter of suspension cells and allowed to incubate in the dark with large amounts of 125I-azido-Cys-3,Ala-15-systemin on a rotating orbital shaker. A UV light hanging over the container was turned on after receptor binding had occurred to initiate in vivo labeling. This method was effective in labeling only the 160 kD protein to high levels, giving a clean starting material for purification. The radioactive tag was used as a marker throughout the purification, which resulted in the isolation of pure receptor from which amino acid sequence was obtained and used to isolate a corresponding cDNA.

The receptor was found by sequence homology to contain 25 leucine rich repeats (LRRs) on the extracellular surface, one transmembrane domain, a Thr/Ser kinase domain on the intracellular portion of the receptor, and a 68 amino acid non-LRR region separating the twenty-first and twenty-second LRRs (Figure 3). The most striking feature of SR160 is its identity with the LRR receptor kinase BRI1 from tomato that regulates brassinolide signal transduction. This demonstrates that,in tomato, SR160 plays a dual role in plant defense and development. 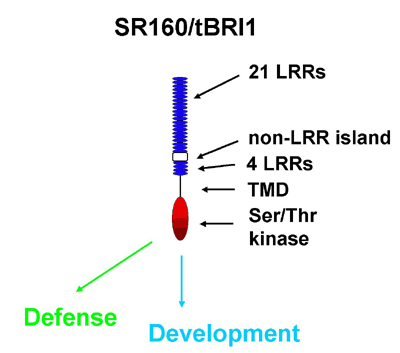 Figure 3   The systemin receptor, SR160, is an LRR receptor kinase identical to BRI1 in tomato. The extracellular domain is composed of 25 leucine rich repeats (LRR) separated at the twenty-first and twenty-second LRR by a non-LRR region of 68 amino acids, followed by an intracellular Ser/Thr kinase domain preceding a single membrane spanning domain. The receptor protein is involved in plant defense in response to the polypeptide hormone systemin, and regulates development in response to the steroid hormone brassinolide.