Essay 16.1 Awakened by a Flash of Sunlight

Essay 16.1 Awakened by a Flash of Sunlight

"But seeds are invisible. They sleep deep in the heart of the earth's darkness, until some one among them is seized with the desire to awaken." —Antoine de Saint Exupery, The Little Prince (Harcourt, Brace & World Inc.)

Seed dormancy reduces the chances of germination under environmental conditions that are not suitable for seedling establishment or future plant development. Dormant seeds are cued to germinate by environmental factors that anticipate or are concurrent with high—often times transient—availability of resources that would preclude unsuccessful seedling growth. Disturbances creating these particular windows for seed germination may be caused by natural agents (e.g., fire, herbivores) or by humans in managed ecosystems. The challenge is to understand which are the environmental cues that trigger seed germination in the natural environment.

In arable lands, soil cultivation usually results in a cohort (flush) of weed seedling emergence, and for many species recruitment takes place almost after tillage, suggesting a sophisticated degree of adjustment to the agricultural environment.

Light has been proposed to work as an environmental signal that allows seeds to detect disturbances and canopy openings. Its role as a stimulus for germination has become well established since the classic experiments of Sauer and Struick (1964) and Wesson and Wearing (1969). Although these authors did not cultivate the soil with tillage equipment in their experiments, they convincingly demonstrated that germination in disturbed soil could be reduced if light is excluded.

The Photocontrol of Seed Germination

Phytochromes, are involved in light mediated seed germination responses. Frequently germination is triggered by light pulses that establish relatively high levels of Pfr (active form) in the seed, and a FR pulse given immediately after a R pulse cancels the potential response to R because most of the Pfr is converted back to Pr (inactive form). Seeds exposed at the soil surface to light filtered through a leaf canopy (low R:FR ratio) would therefore be prevented from germinating. An opening in the canopy would expose seeds to higher R:FR ratios, which in turn would form enough Pfr in the seeds to promote germination. This R/FR reversible response, known as the low-fluence (LF) response may mediate some germination responses in seed banks to canopy openings, provided the seeds are on the soil surface or hardly buried.

Laboratory experiments in the early 1980's have shown that after adequate pretreatments (chilling, giberellic acid, ethanol), the sensitivity of seeds of some species to Pfr can be increased several orders of magnitude. Germination of sensitized seeds can be triggered by light treatments that establish < 0.01 % Pfr. Because a small number of light quanta are required to obtain such low levels of Pfr, this photoresponse has been termed very-low-fluence response (VLFR).

The VLF Response and the Perception of Light Opportunities by Seeds

The discovery of the VLFR in seeds prompted the consideration of its potential ecological significance. An assessment of the ecological importance of light sensitization requires to consider under which conditions this type of response may be critical for seedling recruitment and the maintenance of plant populations.

In agricultural environments, the event that most frequently heralds a period of high light availability is disturbance of the topsoil by tillage operations. That seeds have the sensory machinery capable of detecting these events is fairly obvious from the resulting large populations of seedlings of weedy species. For some species, germination occurs when seeds are carried back to the soil surface after being buried for some months, whereas germination of seed samples maintained at the soil surface or buried at a constant depth is small or nil. Thus, in these species, germination seems to depend on at least two episodes: one that buries the seeds and another that provides the necessary environmental signals to the (now sensitized) seeds. This suggests a remarkable degree of adaption to the intensively disturbed agricultural environment.

If seeds are buried deeper than a few mm, they will be exposed to darkness for relatively long periods of time, and eventually, to pulse-like irradiations of sunlight when the soil is cultivated. Therefore, only a fraction of the total seeds in the soil would experience further light, because light penetrates so poorly into soil. The seeds on the soil surface are vulnerable to desiccation, photoinhibition, and predation. Therefore, if light is an important cue for germinating, cohorts following soil disturbance would seem most dependent on seeds being exposed to light during tillage (Hartamam and Nezadal, 1990). Using a farm-scale version of the pioneering experiment of Sauer and Struik (1964), these scientists observed that weed seedling emergence in arable fields was strongly reduced when tillage operations were performed at night.

The confirmation that the VLFR mechanism was indeed found in buried seeds came from a series of field experiments carried out by Scopel et al. (1991); seed germination of buried seeds of Datura ferox, an annual weed of summer crops, was induced to germinate by piping sunlight from the soil surface to the seeds without disturbing other microenvironmental factors. Germination of a fraction of the seed population (about 25 %) was shown to be limited only by the lack of light (Figure 1A). The experiment was carried out during spring, when there were large daily temperature fluctuations even at 7 cm depth. When seeds were unearthed using light-tight equipment, exposed to sunlight, and placed again at the initial depth (simulating the effects of soil cultivation), germination exceeded 90 % (Figure 1B). The most significant aspect of these results is the observation that a short period of burial caused a dramatic (ca. 10,000-fold) increase in the sensitivity of D. ferox seeds to light. Further experiments suggested that the decrease in the levels of endogenous ABA in the seeds during burial was responsible for allowing the expression of the VLFR. In fact, after a few months of burial, the majority of the seed population could be induced to germinate in the field by exposures equivalent to 0.1 to 10 ms of full sunlight. The amount of Pfr resulting from these short irradiations would be on the order of 0.0001 to 0.01 %, that is 2 to 4 orders of magnitude lower than the level established by a saturating exposure to pure FR (Scopel et al., 1991). These results showed that VLFR could be demonstrated in the field. Other observations of high light sensitivity in exhumed seeds have been reported (Baskin and Baskin, 1998), suggesting that germination responses to VLF were frequent among seeds that have spent some time in the soil. 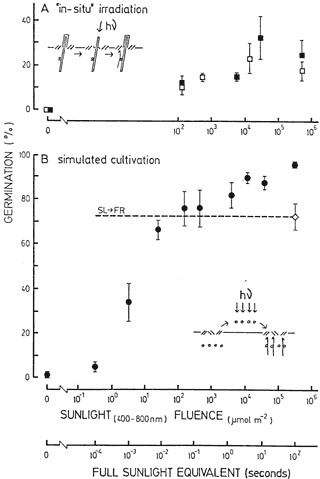 Theoretical calculations of the amount of light that individual seeds would receive during soil tillage suggested that this natural transition from the LF to the VLF mode of phytochrome action might be essential for the perception of light signals of soil cultivation (Scopel et al. 1991). However, the importance of these short pulses received by seeds during soil disturbance in relation to other light signals was not clear. Seeds left at or very close to the soil surface could integrate light over several photoperiods after tillage, which may yield enough Pfr to trigger germination of sensitized seeds. In intensively replicated field experiments with natural seed banks Scopel et al. (1994) found that the normal practice of cultivating the land during daytime increase germination of buried seed populations between 70 and 400% above the levels recorded following nighttime cultivations (Figure 2). Experimental reduction of the irradiance under the tillage implements during daytime cultivation decreases the number of dicots seedlings emerged, while strong artificial illumination of the soil surface under the implements during nighttime tillage increased seedling emergence (Figure 2). These results suggested that the enhancement of germination caused by daytime tillage, compared with nighttime tillage, is due to light that penetrates into the soil during the actual disturbance. This hypothesis was confirmed in another set of field experiments in which covering moldboard-plowed plots with opaque plastics immediately after cultivation did not reduce weed seedling emergence compared to plots covered with transparent film or those left uncovered (Figure 3) (Botto et al. 1998). In contrast, plots cultivated with a chisel plow, causing less soil inversion than a conventional plough, did not promote seedling emergence following daytime (as compared to nighttime) tillage was observed. 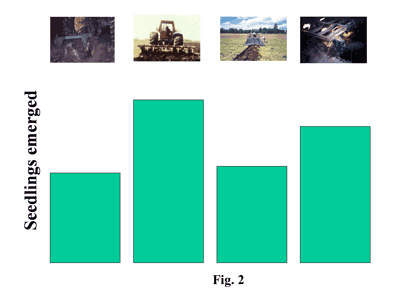 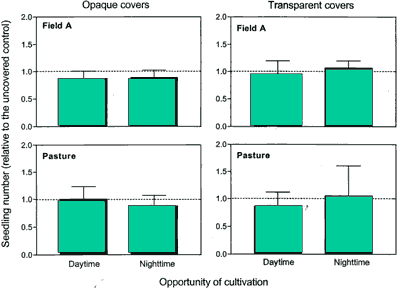 Figure 3   Effect of an opaque or transparent cover on weed seedling emergence relative to the uncovered control. The covers were placed immediately after daytime and nighttime moldboard plow cultivation. The experiments were performed in a pasture and a field under crop cultivation (field A) in late winter 1994. Error bars indicate ± 1 SE. (After Botto et al., 1998; copyright Weed Science.)

Several studies have shown that the magnitude of the photoresponse in seed banks is affected by species composition (Scopel et al., 1994; Buhler, 1997; Gallagher and Cardina, 1998), the agricultural history of the seed bank (Botto et al., 1998), and the season in which cultivations are performed (Scopel et al. 1994, Botto et al. 1998). Environmental conditions experienced by the seeds during and immediately after cultivation could also play an important role in modulating the expression of the VLFR in weed seed banks. Botto et al. (2001) investigated the effect of soil water availability in field and laboratory experiments with seeds of D. ferox and Chenopodium album. Results showed that in daily irrigated plots, seedling density was 1 to 4-fold greater in plots cultivated during the daytime than in those tilled at night, whereas no differences were found when plots were not irrigated soon after tillage and rainfall was excluded. The expression of VLF-induced germination was shown to require high soil water potentials (–0.5 MPa) compared to dark germination. Interestingly, results also showed that the promotive effect of the light signal perceived by the seeds during soil cultivation is maintained for several days (average 6) in drying soil, and seedling emergence can be achieved upon subsequent irrigation.

This series of experiments has provided strong evidence that the VLFR is frequent among many species commonly found in agricultural seed banks. This natural switch to the VLF state allows the seeds to detect and respond to the ms-like exposures to sunlight caused by soil disturbance during cultivations, triggering germination in a period of time in which resources are fully available for seedling growth. The need of a few months to ensure a reduction in the dormancy level—probably through the loss of endogenous inhibitors—would preclude seeds from germinating in response to a light stimulus when other environmental factors, such as soil water potential, may be limiting.