Expansion in Length and Width

Growth is a fundamental plant behavior. Where an animal might run, yawn, or bite, a plant may build a sun leaf, a prop root, or a flower. To create these organs, the plant modifies its growth. Because growth is an irreversible increase in volume, these modifications are permanent and can only be reversed by building yet more organs, with continued growth. A few plant organs, such as certain fruits, are spherical. A spherical organ can be built from uniform growth in all directions—that is, isotropic growth. However, most plant organs are asymmetric, either planar, as in leaves and petals, or cylindrical, as in stems and roots. An asymmetric organ is built from spatially nonuniform—that is, anisotropic, growth. To understand how growth anisotropy is controlled, we must combine biochemistry and biomechanics.

Early attempts to understand the anisotropy of expansion focused on single cells, in particular the internodal cells of the Nitella species, which grow to be centimeters long (Web Topic 14.2). Their large size facilitates experiments and their habit as single-cell filaments simplifies the biomechanical treatment. In influential work, Paul B. Green found that the growth rate in length exceeded the rate for width by about fivefold throughout development (Figure 1A). That is, growth-rate anisotropy was constant. Constancy was also the case for another alga, Hydrodictyon reticulatum, which also grows as single cell filaments. This was notable not only because growth rates themselves rise and fall as the cells age but also because the shape of the cell changes from short and squat, at birth, to long and thin, at maturity. This suggested that the anisotropy of expansion was built into the growth process at a fundamental level. Therefore, most subsequent work on growth ignored the specific value of growth-rate anisotropy. 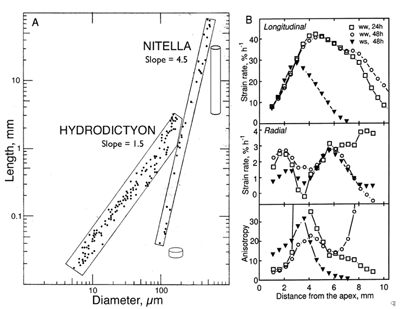 Figure 1   Measurements of growth anisotropy. A. Plot of cell length versus diameter for two species of filamentous, green algae. From the linear relationship (boxed data points are for each species), expansion rates in length and width are inferred to be proportional, with the slope equal to their ratio. To the right of the data for Nitella, the shape of the cells is sketched, not to scale. (Figure modified slightly, from Green 1964; courtesy of Brookhaven National Laboratory.) B. Plot of strain rate (i.e., elemental expansion rate) versus distance from the root tip for well-watered (ww) and water-stressed (ws) maize seedlings. There are two well-watered controls—the usual temporal control where roots are assayed at the same time (48 h after treatment) and a spatial control where the roots are assayed when they have the same approximate length (24 h). Radial strain rate data are for the root cortex. Anisotropy is calculated as the ratio of longitudinal to radial rates. (Figure is modified slightly, from Liang et al. 1997.)

What about the anisotropy of growth rate for a multicellular plant organ? Reviewing the admittedly rather few measurements extant, it was concluded that the classic picture of constancy had been misleading because, in multicellular plant organs, growth-rate anisotropy varies extensively (Baskin 2005). For example, in the maize root responding to lowered water potential (i.e., dry soil, but without compaction), Liang et al. (1997) showed that, while rates of elongation were maintained in the apical part of the growth zone and changed in the basal part, rates of expansion in width did the opposite—namely, changed in the apical part and were maintained in the basal part (Figure 1B). Therefore, there was no constant relation between growth rate in length and width. While continuum mechanics demands that expansion of a material in one direction affects that in another, the reviewed data on growth rates indicate that the plant has a considerable ability to regulate expansion rate in length, independently of that in width.

Remarkably, a similar conclusion has been reached from studies on the genetics of leaf shape. Mutants, mainly but not exclusively in Arabidopsis, are known in which leaf length is altered while width remains constant, and there are other mutants where the reverse is true (Tsukaya 2006). Although these observations of leaves have relied mainly on measurements of leaf length and width and therefore connect indirectly to growth rates at the cellular scale, the simplest explanation is that in leaves, as in roots, expansion in length and width are regulated, at least in part, by distinct molecular mechanisms.

How To Control the Direction of Expansion in A Cell

Growth involves two fundamental processes: enlargement of the cell wall and entry of water into the cell. Water enters a cell moving down its chemical potential: it is drawn inward by virtue of the solutes in the cytosol and opposed by a hydrostatic pressure arising from the elasticity of the cell wall. Liquid water is isotropic and so is hydrostatic pressure; therefore, the source of expansion anisotropy arises from the cell wall. The simplest way to cause asymmetric or directional growth of a cell is to restrict expansion spatially, so that the cell wall loosens in only a small part of the cell. This strategy is exemplified by pollen tubes or root hairs—cells that grow only at their tips. These cells grow directionally and can achieve asymmetric shapes, and yet the cell wall material at the tip may expand isotropically. In fact, expansion of the tip typically is slightly anisotropic, with the rate in circumference being about twice the rate in length (here, length means parallel to the long axis of the cell, and circumference means perpendicular to it). However, because any thin-walled, pressurized cylinder will have twice the stress in the circumferential direction compared to the axial direction, the small amount of expansion-rate anisotropy observed in tip-growing cells can probably be explained without reference to any mechanism besides that which limits expansion to the tip of the cell (Baskin 2005).

In contrast to pollen, most plant cells grow by diffuse growth, meaning that expansion occurs over the whole cell or at least a majority of it. For algal internodal cells, their cylindrical geometry also ensures that circumferential stress is twice the axial but despite this, as stated above, these cells expand nearly five times faster in length than in width. Anisotropic expansion of diffuse growing cells is made possible by the anisotropic structure of the cell wall. As explained in the text (pp. 364–365), the plant cell wall is a fiber-reinforced composite material in which long cellulose microfibrils, embedded in an amorphous matrix, encircle the cell, opposing the circumferential stress and facilitating expansion in length. The tensile strength of a cellulose microfibril, per unit weight, rivals that of steel.

The idea that the alignment of microfibrils endows the wall with a mechanical anisotropy whose orientation is perpendicular the direction in which maximal expansion rate occurs, was formulated years ago and has stood the test of time (Baskin 2005). However, the idea was formulated in the era when the magnitude of anisotropy was expected to be constant. Now that it has been learned that expansion rates in length and width can vary considerably, the problem is now to understand how these rates are regulated. One possibility is that the average length of the microfibrils might regulate the amount of expansion parallel to their net orientation (Wasteneys 2004, cited in Baskin 2005). It is reasonable that shorter microfibrils would slide more easily through the matrix, but to the best of my knowledge no evidence exists pro or con. Another possibility originates from the two species of alga shown in Figure 1. Green found that, per unit thickness of cell wall, the microfibrils of Nitella were better aligned than those of H. reticulatum, and from this he hypothesized that the extent of alignment among cellulose microfibrils dictates the degree of anisotropy (Figure 2A). For multicellular organs, evidence in favor of a modified form of the hypothesis has been obtained—namely, that while each cell (or subcellular patch of cell wall) has highly aligned microfibrils, the net alignment of microfibrils differs among cells, and the greater the divergence, the lesser the expansion-rate of anisotropy (Figure 2B; Baskin 2005). In this view, to the extent that microfibrils in neighboring cells have a patchy pattern of alignment, the anisotropic reinforcement of the tissue considered as a whole suffers and more expansion in width occurs (MacKinnon et al. 2006). These two possibilities are compatible and much remains to be learned about expansion-rate anisotropy. 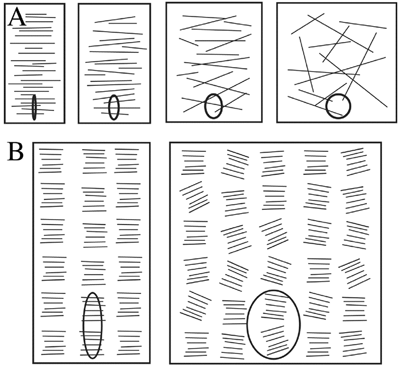 If the orientation of microfibrils sets up the direction of maximal expansion rate, it is obvious to ask what orients the microfibrils? As explained in the text (pp. 366–367), the prevailing answer has been the cortical microtubules—a well aligned array—just beneath the plasma membrane and usually aligned in parallel to the microfibrils. However, this view has been criticized, mainly because of the lack of direct evidence for interactions between microtubules and microfibrils and also because of examples where microtubules can be disrupted without evidently disrupting the orientation of the microfibrils. Recently, Paredez et al. (2006) successfully introduced a GFP-tag into one of the catalytic subunits of cellulose synthase and showed—in living cells—that the synthase moves precisely, overlaying microtubules, and further that when microtubules are disrupted, the movement of the synthase rapidly becomes aberrant. Although the links remain to be identified, this work demonstrates the existence of a connection between microtubules and the progressive synthesis of cellulose.

However, as inferred before and confirmed by Paredez et al. (2006), even in the absence of microtubules, cellulose microfibrils can be synthesized with appreciable local parallel alignment, possibly because the long fibers are confined in the thin space between the membrane and cell wall; hence, like logs floating down a river, they tend to lie parallel. In cells with small diameters (such as a root hair) self-assembly and geometry have been hypothesized to be sufficient to account for patterns of microfibril orientation, and such mechanisms could overlay, or in some cases replace, orientation by microtubules. Furthermore, microtubules are well known to influence expansion anisotropy profoundly. I know of no example where disrupting microtubules fails to elicit reduced expansion anisotropy, but in some cases microfibril alignment appears relatively undisturbed. It remains an open question whether controlling the orientation of microfibril deposition is the sole function of the cortical array. Cortical microtubules may regulate expansion-rate anisotropy through several mechanisms. If so, identifying them looms as a challenge for the future.