“Absentis est quos non anhelo”
“Dead is who does not respire”

Respiration is vital; it is the essence of life. Respiration is the mechanism by which energy obtained during photosynthesis is transformed into biochemical energy, in the form of ATP. This transformation of energy keeps all cells in all organisms alive. While energy conversion is the main function of respiration in animals, respiration has several other functions in plants. Among these are interactions with photosynthesis, such as photorespiration, and the production of carbon skeletons for the many compounds synthesized in plants (e.g., pigments, proteins, and secondary metabolites). Therefore, it comes as no surprise that such a key role of respiration in plants promoted intense effort to investigate its regulation. Even so, the interactions of respiration with other simultaneous processes make its measurement in plants very challenging. In animals, respiration can be simply measured as CO2 or O2 exchange with the atmosphere since there are no other processes involving similar gas exchange. In contrast, in plants, respiration produces CO2 and consumes O2 as photorespiration also does. Moreover, photosynthesis performs the exact reverse process (Figure 1). The combined reaction can be described as: 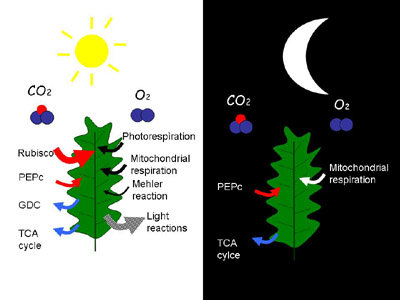 Figure 1 Oxygen and carbon dioxide gas exchange between the atmosphere and a leaf, in the light and in the dark (modified from Hurry et al., 2005). PEPc, phosphoenolpyruvate carboxylase; GDC, glycine decarboxylase; TCA cycle, tricarboxylic acid cycle.

General Aspects of How to Measure Respiration

Biochemically, respiration can be divided into three major parts: 1) glycolysis, 2) tricarboxylic acid (TCA) cycle, and 3) mitochondrial electron transport. The first series of reactions occur in the cytosol, while the other two take place inside the mitochondria. Respiration measurements usually involve gas exchange, that is, measurements of the rates of O2 consumption and CO2 evolution. Gas exchange methods use either an open system (comparison of inlet air of known composition with outlet air enriched in CO2 or depleted in O2) or a closed system (in which the CO2 increases or O2 decreases with time). Such a principle applies to dark respiration. Other methods (e.g., isotopic measurements) are used in the light to distinguish CO2 and O2 fluxes caused by respiration from those due to photosynthesis or photorespiration.

In the absence of light, most of the CO2 production and O2 consumption is due to respiration. While CO2 is produced in the decarboxylation reactions (pyruvate decarboxylase and the TCA cycle), oxygen is mostly consumed by the terminal oxidases of the mitochondrial electron transport chain. In order to avoid transient metabolic activities that immediately follow darkening, known as light-enhanced dark respiration, night respiration must be measured only after 20–30 minutes acclimation to darkness. Carbon dioxide production can be measured with an infrared gas analyzer (IRGA) in both open and closed systems. The advantage of this method is that the organ measured can remain attached to the whole plant. The main drawbacks of this method, especially for open systems, are its low sensitivity—as the difference in CO2 mole fraction between the inlet and outlet air can fall within the signal-to-noise ratio of the measuring system (1–2 ppm)—and the possibility of leakage around the gaskets of the cuvettes (Hurry et al., 2005).

Measurements of oxygen consumption with oxygen electrodes (Clark et al., 1953) are good indicators of the total respiratory rate. This method is performed in a closed cuvette, either in liquid or gas phase. The main disadvantage is that it must be performed on detached tissues.

Since oxygen can be consumed by either cytochrome oxidase or the alternative oxidase, specific methodologies are required to measure the specific contribution of each pathway. While the capacity of each of these two oxidases can be determined with the oxygen electrode after poisoning tissue with SHAM (cytochrome oxidase capacity) or KCN (alternative oxidase capacity), the actual contribution of each oxidase to total respiration can only be measured with the oxygen isotope fractionation technique (Guy et al., 1989).

This oxygen isotope fractionation technique is based on isotope ratio mass spectrometry (IRMS), which measures changes in the isotopic composition of oxygen molecules (18O/16O) during respiration in a closed system. Both oxidases favor 16O over 18O because it requires less energy to break the 16O=16O bond than the 18O=16O bond. Therefore, the proportion of 18O (18O/16O ratio) in the air remaining in a closed cuvette that contains a respiring tissue increases as total oxygen is decreased due to respiration. The respiratory isotope fractionation is obtained from measurements of the oxygen isotope ratio (R = 18O/16O) and the fraction of unreacted oxygen ([O2]/ [O2]o) remaining in the respiration cuvette at different times during the course of the reaction compared to their initial values (Ro)

A complete description of the calculations of the isotope fractionation (D) can be found in Guy et al. (1989). It results in the overall equation as follows:

Although both oxidases prefer to use 16O over 18O, their “degree of preference” differs, allowing the calculation of their relative contribution to the total mitochondrial oxygen consumption and electron transport. The two mitochondrial terminal oxidases have a different 18O/16O fractionation because they have different catalytic mechanisms to break the double bond of O2 (Hoefs, 1987). The alternative oxidase fractionates more against 18O than does cytochrome oxidase (Guy et al., 1989). Figure 2 shows a classic experiment in which fractionation by both cytochrome oxidase (Dc) and the alternative oxidase (Da) is measured in the presence of the specific inhibitors SHAM and KCN, respectively. Once fractionation values for each respiratory pathway have been obtained, measurements of the fractionation in the absence of any inhibitors (Dn) give the electron partitioning through the alternative pathway (τa). 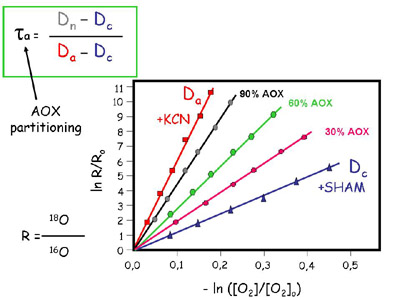 Figure 2 Calculation of the electron partitioning through the alternative oxidase (τa) using the oxygen isotope fractionation technique. This is an example of the lines expected in different situations where the contribution of the alternative pathway (τa) is approximately 90%, 60%, and 30% of total respiration. This could be the case for the floral receptacle of Nelumbo nucifera (Watling et al., 2006), and for cotyledons and leaves of Glycine max (Ribas-Carbo et al., 2005), respectively. AOX, alternative oxidase.

Measurement of respiration in the light is much more challenging than in the dark, because photorespiration and photosynthesis also occur, thereby masking the O2 and CO2 exchanges that are due to mitochondrial respiration. Moreover, there is evidence that the rate of mitochondrial O2/CO2 exchange is depressed in the presence of light as compared to the rate in darkness. Several methods have been proposed to estimate the rate of respiration in the light, some of which are briefly explained here. For detailed reviews of all methods see Hurry et al. (2005) and Tcherkez et al. (2005). For a proper understanding of these methods, it should be kept in mind that in the presence of light, leaf gas exchange can be described as:

where AN is the “net” photosynthesis (determined with a standard open gas exchange system), AG is gross CO2 assimilation, PR is photorespiration, and Rd is respiratory CO2 evolution in the light. The first published method for measuring respiration in the light was the so-called Kok method (Kok, 1948). It is based on the inhibitory effect of light on the rate of respiration, and it only requires the use of a commercial CO2 gas exchange system. It is based on a light-response curve obtained at very low light intensities. Generally, the net CO2 assimilation rate shows an abrupt decrease in slope as light levels increase (Figure 3). The linear extrapolation to zero light from the shallower, “upper” slope indicates the rate of respiration in the light, or “day” respiration (Rd), while a line extrapolated from the steeper, "lower" slope intersects the y-axis (zero light) at the night respiration rate (Rn). Presently, there is controversy whether the Kok effect is fully related to respiration and therefore, the significance of the day respiration rate obtained thereby is uncertain (See textbook Chapter 9 for more information on light and CO2 compensation points). 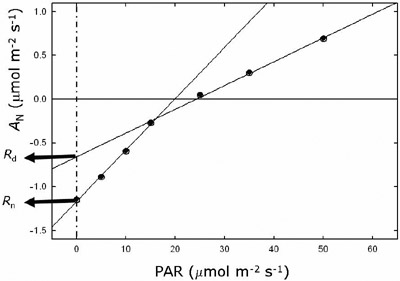 The Cornic method (Cornic, 1973) is performed on an illuminated leaf placed in CO2-free air, in either N2 (0% O2) or 21% O2, and then darkened. The CO2-production rate in the light is denoted as LO (in 21% O2) or LN (in N2). When the leaf is darkened, refixation of (photo) respired CO2 vanishes and a peak of CO2 production, represented as p, can be seen. Under several simplifying assumptions, it can be shown that Rd = LO – LN – p + Rn.

Another commonly used technique is the Laisk method (Laisk, 1977). This is based on the assumption that while light intensity alters the rates of photosynthesis and photorespiration, it does not affect the rate of mitochondrial respiration. Using a standard CO2 gas exchange system, assimilation response curves versus leaf intercellular CO2 concentration are obtained at several different light levels (Figure 4). As light decreases, both gross photosynthesis and photorespiration will decrease proportionally, and so will the slope of the response of net photosynthesis. Therefore, if Rd does not to change with light intensity, all curves should converge to a single point, which will correspond to the CO2 compensation point in the absence of day respiration (Γ*) on the x-axis and –Rd on the y-axis. Recently, controversy has been raised over this method (Gu and Sun, 2014) as it appears that it strongly depends on stomatal conductance more than on actual respiration. (See textbook Chapter 9 for more information on light and CO2 compensation points.) 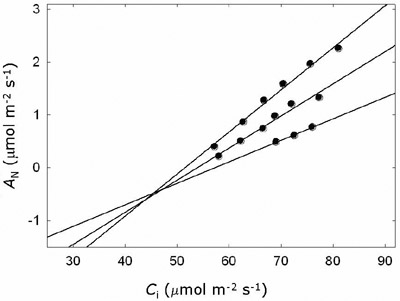 A more recent method uses stable isotopes of carbon to estimate the rate of respiration in the light (Loreto et al., 2001). This method takes advantage of the fact that “day” respiratory substrates turn over more slowly (half-times on the order of minutes or longer) than photorespiratory substrates (half-times on the order of seconds). Plants are grown under a natural 12CO2-atmosphere and then placed in a 13CO2-atmosphere. The rate of production of 12CO2 measured in a 13CO2-atmosphere indicates the “day” respiration rate Rd (with some corrections required to take into account refixation of respired 12CO2).

These methods have contrasting advantages and disadvantages: for example, the Kok method is performed at low light intensities while the Laisk method is performed at low CO2 concentrations and, consequently, plants present small assimilation rates, causing large measurement variability. In addition, the Laisk method requires measurements at several light levels, and it is plausible that “day” respiration varies with light.

To summarize, measuring respiration is a very challenging task, especially in the light, when substrates and products are interchanged by different and opposing reactions that operate simultaneously. In the dark, respiration consumes oxygen by two different oxidases that act simultaneously and, consequently, can only be differentiated using stable isotope techniques. Moreover, the recent discovery of the alternative oxidase in other phylogenetic groups means that microbiologists and invertebrate physiologists will also have to reassess their methodologies for measuring respiration and will have much to learn from plant physiologists.

Kok B (1948) A critical consideration of the quantum yield of Chorella photosynthesis. Enzymologia 13: 1–56.