The synthesis of many biological compounds and the regulation of several metabolic processes require the addition or removal of one-carbon units. Tetrahydrofolate derivatives (vitamin B9) mediate most of these transfers of C1-units, either directly or indirectly via S-adenosylmethionine. Some enzymes involved in CO2 manipulation during carboxylation, decarboxylation, and transcarboxylation reactions utilize another essential cofactor, biotin (vitamin B8). Unlike plants and some fungi and bacteria, animals cannot synthesize tetrahydrofolate or biotin de novo and depend entirely on their dietary supply. The aim of the present Essay is to summarize recent progress in elucidating the tetrahydrofolate and biotin biosynthetic pathways in plants, with emphasis on the essential role of mitochondria in these complex networks.

Structure and functions of folates

Tetrahydrofolate (THF) and its derivatives, collectively termed folates, are tripartite molecules with a pterin ring, a para-aminobenzoate (pABA) moiety, and a glutamate chain with 1 to 8 residues (Figure 1; Rébeillé et al. 2006; Ravanel et al. 2011; Ravanel and Rébeillé 2012). The physiological forms of folates are mainly polyglutamylated, and folate-dependent enzymes prefer these coenzymes. The THF-carried C1-units exist in various oxidation states—from the most oxidized formyl to the most reduced methyl levels—and are attached to THF at positions N5 of the pterin ring, N10 of the pABA moiety, or as a bridge between the two (see Figure 1). One remarkable feature of folate metabolism is its ability to interconvert the C1-units at different oxidation levels. Folates are involved in several key cellular processes including the synthesis of nucleic acids (purines, thymidylate), some amino acids (methionine, glycine, serine), formylmethionine-tRNA, and pantothenate (vitamin B5), and, specific to plants, in photorespiration. The precursors of THF are synthesized in the cytosol and plastids

The biosynthetic pathway for THF is nearly the same in bacteria, fungi, and plants. All the genes and enzymes specific to the pathway have been characterized in plants, at least in Arabidopsis thaliana (Ravanel et al. 2011). The pterin and pABA moieties are first synthesized in separate branches of the pathway. The synthesis of dihydropterin from GTP involves the enzymes GTP-cyclohydrolase I, dihydroneopterintriphosphate pyrophosphatase, and dihydroneopterin aldolase (reactions 1–3, Figure 2). Genomic evidence suggests that the three enzymes of the pterin branch are present in the cytosol. pABA is synthesized from chorismate, a product of the shikimate pathway, through the reactions catalyzed in plants by a bifunctional glutamine amidotransferase/aminodeoxychorismate synthase (GAT/ADCS) and an aminodeoxychorismate lyase. These reactions take place in the stroma of chloroplasts (reactions 4 and 5, Figure 2). Interestingly, it was recently shown that drugs that inhibit GAT/ADCS displayed herbicidal and anti-parasitic (toxoplasmosis, malaria) properties (Camara et al. 2012). In addition, the recent development of engineering strategies to increase folates content in transgenic tomato plants have revealed that the rates of synthesis of both the pterin and pABA moieties are limiting factors for THF synthesis, at least in fruits and seeds (Diaz de la Garza et al. 2004; Storozhenko et al. 2007). 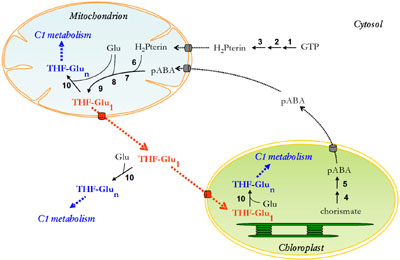 THF is synthesized in mitochondria

The last five steps of the pathway leading to the assembly of dihydropterin, pABA, and glutamate take place in mitochondria (see Figure 2). The first two reactions are catalyzed by a bifunctional hydroxymethyldihydropterin pyrophosphokinase / dihydropteroate synthase enzyme (reactions 6 and 7, Figure 2). The dihydropteroate synthase activity is a potential regulatory point of the folate biosynthetic pathway because the enzyme is feedback inhibited by dihydropteroate, a product of the reaction, dihydrofolate, and THF monoglutamate. Also, structural analogs of pABA (sulfonamides) inhibit strongly the plant dihydropteroate synthase and behave as herbicides. Dihydrofolate synthetase, which catalyzes the attachment of the first glutamate residue of THF (reaction 8, Figure 2), is also essential for plant development because a knockout in the corresponding gene is embryo-lethal in Arabidopsis. After the first glutamylation step, dihydrofolate is reduced to THF by the enzyme dihydrofolate reductase (DHFR, reaction 9, Figure 2). Higher plants and protozoa possess a bifunctional enzyme bearing DHFR and thymidylate synthase (TS) activities. TS catalyzes the methylation of dUMP to dTMP (for DNA synthesis) in the presence of CH2-THF. This reaction is unique because CH2-THF acts both as a C1-unit donor and a reducing agent, thus producing dihydrofolate that is recycled back to THF through the DHFR activity. Several lines of evidence suggest that plant cells possess two or three DHFR/TS isoforms located in the mitochondria and, possibly, the cytosol and the plastids. DHFR/TS is also the target of several drugs used to fight cancer or parasites.

Intracellular traffic of folate-coenzymes—The last step of THF synthesis in plants is the sequential addition of γ-linked glutamate residues to THF, a reaction catalyzed by folylpolyglutamate synthetase (reaction 10, Figure 2). In all eukaryotes studied so far, folylpolyglutamate synthetase isoforms were found in each subcellular compartment containing folylpolyglutamates, suggesting that these derivatives cannot cross membranes and must be synthesized in situ. Therefore, it is not surprising that in Arabidopsis, folylpolyglutamate synthetase is present as three distinct isoforms located in the mitochondria, the cytosol, and the chloroplasts. In Arabidopsis, each folylpolyglutamate synthetase isoform is encoded by a separate gene, a situation that is unique among eukaryotes. As shown in Figure 2, the pathway for THF synthesis in plants is split between plastids, mitochondria, and cytosol. This complex distribution of steps, which is not observed in other eukaryotes, suggests a sophisticated trafficking of folate-coenzymes and their biosynthetic intermediates between the organelles via the cytosol. The only plant folate transporters identified so far are located in the chloroplast envelope (Ravanel et al. 2011). Among these compartments, mitochondria occupy a central position because they have to take up the pterin and pABA units from the cytosol and are the only site for de novo synthesis of the fully active THF molecule.

The Importance of Mitochondria in Biotin Synthesis

Biotin synthesis occurs in 4 steps—In plants, as well as in all known microbes, biotin is synthesized from pimeloyl-CoA and alanine through four enzymatic steps comprising 7-keto-8-aminopelargonic acid synthase (KAPA synthase), 7,8-diaminopelargonic acid (DAPA) aminotransferase, dethiobiotin synthase, and biotin synthase (Figure 3). Initial information on biotin synthesis and transport in higher plants came from analysis of the bio1 biotin auxotroph of Arabidopsis thaliana. Seeds homozygous for the mutation failed to develop unless exogenous biotin, dethiobiotin or DAPA was supplied to the plant. The E. coli bioA gene, which codes for DAPA aminotransferase, could genetically complement the bio1 mutation, demonstrating that bio1/bio1 mutant plants are defective in this enzyme. Treatment of biotin-overexpressing lavender cells with 3H-pimelic acid showed that all the intermediates of biotin synthesis established in bacteria, plus the novel metabolite 9-mercaptodethiobiotin (9-mDTB), accumulate in plants. This demonstrated that the pathway of biotin synthesis in bacteria is conserved in plants and that the reaction catalyzed by biotin synthase proceeds in two distinct steps involving 9-mDTB as an intermediate (Alban et al. 2000). After the first step, all steps of the biotin synthesis pathway in plants occur within mitochondria (Figure 3) (Alban 2011). 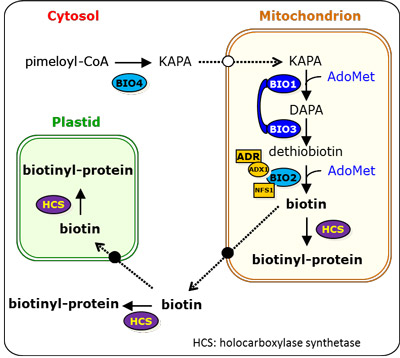 Figure 4. Ribbon (A) and surface (B) representations of the dethiobiotin synthetase / DAPA aminotransferase dimer. (A) DAPA aminotransferase (BIO1) and dethiobiotin synthetase (BIO3) domains from each monomer are coloured in dark blue/light blue and red/magenta, respectively. (B) The external crevice is delineated by a dashed green line (Adapted from Cobessi et al. 2012).

The last step of biotin synthesis involves a protein complex located in mitochondria— The catalytic mechanism of the last step of biotin biosynthesis is still unclear. In E. coli the conversion of dethiobiotin to biotin is catalyzed by a complex involving at least 3 proteins in addition to biotin synthase, which alone is not able to support this reaction (Marquet et al. 2001). A cDNA coding Arabidopsis biotin synthase (named BIO2) was cloned by functional complementation of an E. coli bioB biotin auxotroph mutant (Baldet and Ruffet 1996), and the protein was shown to be located in mitochondria (Baldet et al. 1997). The subsequent development of radiochemical and biological detection methods allowed the first detection and accurate quantification of a plant biotin synthase activity, using protein extracts from bacteria overexpressing the Arabidopsis BIO2 protein (Picciocchi et al. 2001). Like its bacterial counterparts, purified BIO2 protein is a homodimer that, in its active form, coordinates a [2Fe-2S] and a [4Fe-4S] cluster per monomer. Also, the purified enzyme alone is not able to support biotin synthesis. Heterologous interactions between the plant BIO2 protein and bacterial accessory proteins yield a functional biotin synthase complex. Combination experiments using purified BIO2 protein and extracts from pea leaf or potato tuber organelles showed that only mitochondrial fractions could elicit biotin formation in the reconstituted plant system, confirming the mitochondrial location of biotin synthesis in plants (Picciocchi et al. 2001).

We observed that mitochondrial adrenodoxin (ADX1), adrenodoxin reductase (ADR), and cysteine desulfurase (NFS1) proteins are essential components for the plant biotin synthase reaction (Picciocchi et al. 2003). The in vitro stimulation of biotin synthase activity by the NFS1 protein strongly supports the idea that cysteine is the initial donor of sulfur for biotin in plant mitochondria. We also observed that, in vitro, purified recombinant ADX1 and ADR formed an efficient low potential electron transfer chain that interacted with the BIO2 gene product to reconstitute a functional plant biotin synthase complex. The role of this physiological reduction system is the reductive cleavage of S-adenosylmethionine (AdoMet), an obligatory cofactor of the reaction, through the [4Fe-4S] center of the enzyme. Thus, BIO2 from Arabidopsis is the first identified protein partner in higher plants for this specific mitochondrial redox chain.

In addition to their implication in the biotin synthase reaction, the mitochondrial ADX/ADR redox system and NFS1 protein also could be involved in the synthesis of lipoate cofactor, which also occurs in plant mitochondria (Douce et al. 2001), because the lipoate synthase and biotin synthase reactions are mechanistically related. Also, the yeast proteins homologous to ADX1, ADR, and NFS1 (namely Yah1p, Arh1p, and Nfs1p) are key components of iron-sulfur cluster assembly machinery. Consequently, these proteins could have two functions: a specific function in the biotin synthase and lipoate synthase reactions and a more general role in biosynthesis of Fe-S clusters for other redox enzymes, e.g., aconitase (Figure 5).

Intracellular trafficking of biotin and its precursors—Finally, the mitochondrial location of the biotin pathway raises interesting new questions. Indeed, synthesis of biotin depends on the presence of KAPA and AdoMet in plant mitochondria (see Figure 3). In plant cells, KAPA and AdoMet are synthesized in the cytosol, a compartment in which free biotin also accumulates (Pinon et al. 2005). Specific carriers (that remain to be identified) are thus required to ensure the import of AdoMet into the mitochondrial matrix on one hand and to export biotin to the cytosol on the other hand (see Figure 3). Furthermore, the control of AdoMet and KAPA fluxes from cytosol to mitochondrial matrix constitutes a potential additional regulatory level of biotin synthesis in plant mitochondria. Figure 5 The various functions (demonstrated or putative) associated with the adrenodoxin/adrenodoxin reductase redox system and NFS1 protein in plant mitochondria. The ADX/ADXR redox system from the matrix space is probably the physiological electron donor for numerous metabolic reactions. Our work demonstrates the involvement of these proteins in the biotin synthase reaction. Mitochondrial lipoate synthase (Lip1) is believed to have a similar reaction mechanism. In plant mitochondria, an iron-sulfur assembly machinery similar to that described in yeast has been identified. Thus, the ADX/ADXR redox system and NFS1 protein from Arabidopsis might also be involved in biosynthesis of Fe-S clusters for mitochondrial proteins (including BIO2 and Lip1) and cytosolic proteins. Finally, the participation of this matrix redox system in other, still unidentified, cell functions cannot be excluded. DTB, dethiobiotin (Adapted from Picciocchi et al. 2003).