The production of ROS is an unavoidable consequence of aerobic respiration. When the terminal oxidases—cytochrome c oxidase and the alternative oxidase—react with oxygen, four electrons are transferred and water is the product. However, occasionally oxygen can react with other electron transport components. Here, only one electron is transferred, and the result is the superoxide anion, O2–. In plant tissues it has been estimated that 1–2 percent of oxygen consumption leads to superoxide formation (Puntarulo et al. 1988). Through a variety of reactions, superoxide leads to the formation of hydrogen peroxide, hydroxyl radicals, and other ROS—all of which can cause damage in various ways. Protein side chains are modified, and even the backbone can be broken. For instance, unsaturated fatty acids in membrane lipids are attacked and peroxide derivatives are formed, eventually leading to breakage of the fatty acid backbone. Finally, ROS can react with DNA and cause mutations (Halliwell and Gutteridge 2007, Møller et al. 2007).

From the foregoing it is clear that there is a need to limit the production of ROS, to detoxify ROS once formed, and to repair damage caused by ROS (Table 1). However, when plants are stressed, the steady-state level of ROS usually increases, and it has been hypothesized that ROS (specifically, hydrogen peroxide) might also act as a messenger that turns on stress-related genes (Figure 1). This could happen via amplitude- and frequency-modulated waves or pulses of ROS (Vestergaard et al. 2012).

Table 1 Strategy for the Defense Against Oxidative Stress in (Plant) Mitochondria
Note: Not all of the listed mechanisms and enzymes have been firmly established to be present in plant mitochondria (see text for a critical evaluation).
ETC, electron transport chain; MnSOD, Mn-superoxide dismutase
Source: Modified from Møller 2001.

Figure 1   Sequence of events involving plant mitochondria in response to stress. ETC, electron transport chain; AOX, alternative oxidase. (From Møller 2001; and based on Wagner, 1995 and Wagner and Krab, 1995.)

Relatively little is known about ROS turnover in plant mitochondria, so the following discussion will lean heavily on knowledge gained from experiments with mammalian mitochondria (see Figure 1).

Plant Mitochondria Produce ROS but Have Mechanisms for Minimizing This Production

In mammalian mitochondria, complexes I and III are the main sites of ROS production (Brand 2010). In complex III, superoxide is formed via the reduction of oxygen by the semiquinone (Turrens 2003; see Web Topic 12.2). In plant mitochondria, complexes I and III certainly contribute to ROS (Møller 2001). However, until the possible contribution by the rotenone-insensitive NAD(P)H dehydrogenases (see Web Topic 12.3) has been carefully tested, we do not have the complete picture.

ROS production is highest in both mammalian and plant mitochondria under conditions in which the electron transport chain is relatively reduced. This means that any mechanism that can minimize this reduction will limit ROS production. Thus, activation of both the alternative oxidase and the uncoupling protein causes a marked reduction in ROS production (Purvis 1997, Maxwell et al. 1999, Camacho et al. 2004; see Web Topic 12.3) probably through a signal transduction pathway like that shown in Figure 1. Whether activation of NDin(NADH) will limit ROS production at complex I, as would be expected (see Web Topic 12.3), has not yet been tested.

Another way to prevent overreduction of the electron transport chain—and thus ROS production—is to maintain the mitochondria in State 3 by immediately regenerating ADP from ATP produced by the mitochondria. This is done efficiently by transferring the terminal phosphate group on ATP to glucose by means of a hexokinase associated with the mitochondria (Camacho-Pereira et al. 2009).

There are five potential enzymes (or enzyme systems) for removing hydrogen peroxide (see Figure 2), but at present we do not know which one is active in plant mitochondria. 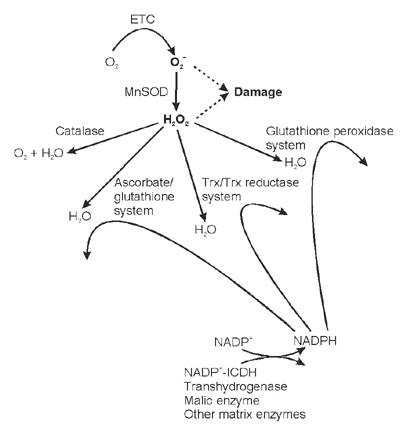 The last four hydrogen peroxide-removing enzymes use sulfhydryl groups as donors of reducing equivalents and, in all four cases, these sulfhydryl groups are regenerated by reduction with NADPH. This is a good example of the many uses of NADPH in mitochondria (Møller and Rasmusson 1998).

ROS Can Modify and Damage Lipids, Proteins, and DNA

Peroxidation of polyunsaturated fatty acids by a ROS attack can lead to chain breakage and shortening, which will increase membrane fluidity and permeability. When isolated mammalian mitochondria are exposed to oxidative stress, the membrane phospholipid diphosphatidylglycerol is damaged, presumably via peroxidation of the polyunsaturated fatty acids 18:2 and 18:3, which are the main fatty acids in this lipid. The damage to diphosphatidylglycerol causes an inhibition of cytochrome c oxidase, which appears to require this phospholipid for activity (Paradies et al. 2000).

Proteins can be modified/damaged by ROS either through direct chemical interaction or indirectly, involving end products of lipid peroxidation. A number of amino acids can be modified; for example, cysteine can be oxidized to cystine, and both proline and arginine are converted to glutamyl semialdehyde. Such modifications can affect the function of proteins. In some cases, the damaged amino acids are repaired in situ, whereas in other cases, the entire protein is removed and degraded (Dean et al. 1997; Møller and Kristensen 2004; Møller et al. 2007). A number of oxidized proteins have been identified in isolated plant mitochondria, presumably because they are particularly susceptible to oxidative damage in vivo (Kristensen et al. 2004; Møller and Kristensen 2006). We still do not understand the metabolic significance of this oxidation.

Breakdown products of lipid peroxidation, notably 4-hydroxy-2-nonenal (HNE), affect several mitochondrial processes. Decarboxylating dehydrogenases, such as glycine decarboxylase, are inhibited by HNE because it specifically binds to, and inactivates, lipoic acid, an essential cofactor for these enzymes (Millar and Leaver 2000). HNE inhibits the alternative oxidase, so an increasing proportion of the enzyme may become inactivated during oxidative stress. The induction of alternative oxidase gene expression during stress might therefore be necessary to maintain the activity of the enzyme in the face of increasing inactivation rather than to upregulate its activity (Winger et al. 2005). Interestingly, HNE stimulates the uncoupling protein (Smith et al. 2004), which will prevent overreduction of the electron transport chain and thus lower ROS production. The sensitivity of the alternative oxidase to HNE might explain the presence of both of these energy-wasteful enzymes in plant mitochondria (see Web Topic 12.3).

One of the theories of ageing is that oxidatively modified proteins accumulate over time. This does not appear to be the case in Arabidopsis, where the amount of proteins with free carbonyl groups increases during the vegetative phase, but decreases dramatically during the flowering and senescence phases (Johansson et al. 2004).

Finally, ROS can cause mutations in mtDNA. During aging in mammals, mutations in mtDNA accumulate faster than in nuclear DNA, possibly because mtDNA is closer to the site of ROS synthesis. However, plant mtDNA does not have a particularly high rate of mutation; in fact, rearrangements are more common. Little is known about ROS-induced DNA modifications in plant mitochondria.

As mentioned in the introduction, hydrogen peroxide could be a messenger from the mitochondria to the nucleus. If formed in the matrix, the hydrogen peroxide would have to cross the inner membrane and this might happen via aquaporins, channel-forming proteins (Bienert et al. 2007). However, ROS-modified fatty acids or proteins or their fragments could also act as messengers (Møller and Sweetlove 2010).

Wagner, A. M. (1995) A role for active oxygen species as second messengers in the induction of alternative oxidase gene expression in Petunia hybrida cells. FEBS Lett. 368: 339–342.