Mitochondria are vitally important eukaryotic organelles. It is not possible to attribute the discovery of mitochondria to a single person since between 1850 and 1890 many cytologists observed granular bodies within cells, and some of these bodies may have been mitochondria (Lehninger 1964). It is believed mitochondria were first named cytomikrosomen by Adolf Freiherr von La Valette St. George in 1886 but the name that stuck, mitochondria, was coined by Carl Benda, a German zoologist in 1898 (Cavers 1914). The occurrence of mitochondria in plant cells was first described by Meves in 1904 (see Cavers 1914), although it was many years until the common role of these organelles in all eukaryotes was established.

Mitochondria were recognised, over sixty years ago, as the site of oxidative energy metabolism (Kennedy and Lehninger 1949), and are now known to synthesize the majority of respiratory ATP in plants, animals, and fungi. In addition to this crucial role, mitochondria are involved in the de novo synthesis of many compounds, such as iron-sulphur clusters, phospholipids, nucleotides, and several amino acids; this ensures that mitochondria are essential to eukaryotic life—even organisms able to respire anaerobically can only survive when mitochondria are present to manufacture these unique metabolites.

Mitochondria cannot be created de novo, meaning that any new mitochondrion must be formed from the division of an existing organelle. In addition to division, mitochondria also undergo fusion, where two or more individual organelles join to produce a single mitochondrion. Mitochondrial fission and fusion are the primary processes controlling mitochondrial form and together they control mitochondrial size and number (Logan 2006, 2010). Traditionally, the mitochondrion has been portrayed as an immobile, oval-shaped body. In reality, mitochondria are very dynamic organelles, capable of changing size and shape in a matter of seconds (Bereiter-Hahn and Voth 1994; see Movie 1). Additionally, they undergo short- and long-distance vectorial transport mediated by association with the cytoskeleton. Advances in bioimaging have allowed scientists to re-evaluate the behavior of mitochondria in vivo, stimulating a surge of interest in determining the genes, proteins, and mechanisms that control mitochondrial shape, size, number, and distribution (collectively termed mitochondrial dynamics) (Logan 2010).

Movie 1: The movie shows highly dynamic wild-type mitochondria (sped up 6 times) in the epidermal cell layer of one of the first true leaves of a 7-day-old Arabidopsis seedling. The arrow points to a mitochondrion that will become constricted and then divide. Note that the constricted part of the mitochondrion remains associated with one daughter organelle.

These facts suggest that the genes, proteins, and mechanisms controlling plant mitochondrial dynamics, while exhibiting some similarities to yeast, are predominantly distinct. With this in mind, a mutant screening approach was used to try to identify plant-specific genes involved in the control of plant mitochondrial morphology and dynamics (Logan et al. 2003). Arabidopsis plants expressing green fluorescent protein (GFP) targeted to the mitochondria (Logan and Leaver 2000) were mutagenized using ethyl methanosulfonate (EMS) and the second (M2) generation were then screened for altered mitochondrial shape, size, number, and distribution using a fluorescence microscope. Six viable mutants with distinct mitochondrial phenotypes were identified from a population of approximately 9500 individuals. Forward genetics (i.e., mutant phenotype identified prior to identification of the mutated gene, cf. reverse genetics above) is being used in the form of positional cloning and genome sequencing to identify the mutant genes. 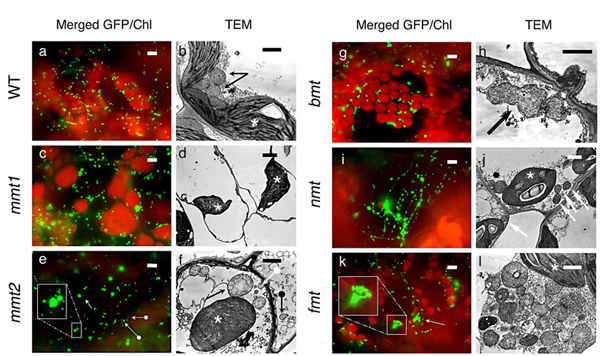 The friendly mitochondria mutant (fmt) was identified in Arabidopsis by the presence of discrete clusters of tens of mitochondria (see Figure 1, k & l; Figure 2). While only a proportion of the cell’s mitochondrial population form clusters (many maintain a wild-type distribution), the phenotype of this mutant is striking. Forward and reverse genetics were used to reveal that the mitochondrial phenotype of the friendly mutant was due to a single point mutation and we named the Arabidopsis gene FMT (FRIENDLY, Logan et al. 2003). We have since demonstrated that FRIENDLY is a cytosolic protein that associates with mitochondria and regulates mitochondrial fusion through mediating the length of time mitochondria remain in close association during “kiss and run” fusion (El Zawily et al. 2014). 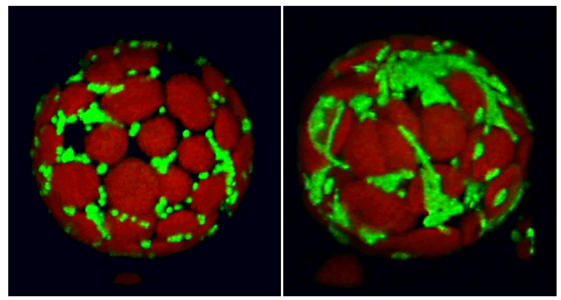 A recent study identified a Drosophila orthologue of FRIENDLY, named clueless, and implicated this gene in a mitochondrial quality control pathway (Cox and Spradling 2009). The clueless gene is, like FRENDLY, required for the correct subcellular distribution of mitochondria (see Logan 2010). Clueless was shown to interact genetically with parkin, the Drosophila orthologue of a human gene, PARK2 (Cox and Spradling 2009). PARK2 is mutated in many cases of early-onset Parkinson’s disease and it is believed that mitochondrial dysfunction in dopamine-producing nerve cells may be important in causing Parkinson's symptoms.

Research is underway to exploit the genetic differences between Arabidopsis and Homo sapiens that have arisen over the past 1.6 ´ 109 years in order to identify novel components of a conserved mitochondrial quality control pathway involving FRIENDLY and to uncover the exact role FRIENDLY and its orthologues play in maintaining normal mitochondrial dynamics. It is possible, indeed likely, that there are metazoan-specific and plant-specific components of the mitochondrial quality control pathway, but screening an evolutionarily distant eukaryote (Arabidopsis) for candidate proteins in this pathway may identify additional mechanistically important components. Nevertheless, identification of plant-specific components will also inform research on metazoan species. There is potential for both conserved and plant-specific genes to be used as tools to identify conserved ligands that could be the focus of drug development studies.

Observations of mitochondrial behavior have been made for over a century (see Lehninger 1964). However, recently developed techniques using green fluorescent protein, enabling the unambiguous visualization of mitochondria in living tissue, have revolutionized research in this area. Such advances in cell biology have been complemented by advances in molecular genetics, supported by the Arabidopsis Genome Initiative; together, these advances have enabled a new era of functional genomics research into mitochondrial dynamics. One of the main conclusions that can be reached from recent research on mitochondrial dynamics is the clear interplay between mitochondrial form and function. For example, studies into plant cell death and apoptosis (a morphologically-distinct type of programmed cell death occurring in yeast and animals, see Web Essay 12.5) have uncovered the vital role played by mitochondrial dynamics in these processes. As we learn more about plant mitochondrial dynamics we can expect to discover many more instances where mitochondrial form and function are integrated and where plants can be useful eukaryotic models for the cell and for the molecular biology of human disease.

Arimura, S., and Tsutsumi, N. (2002) A dynamin-like protein (ADL2b), rather than FtsZ, is involved in Arabidopsis mitochondrial division. Proceedings of the National Academy of Sciences USA 99: 5727–5731.

Scott, I., Tobin, A. K., and Logan, D. C. (2006) BIGYIN, an orthologue of human and yeast FIS1 genes functions in the control of mitochondrial size and number in Arabidopsis thaliana. Journal of Experimental Botany 57: 1275–1280.