Essay 10.4 The Blue/Green Reversibility of the Blue-light Response of Stomata

Essay 10.4 The Blue/Green Reversibility of the Blue-light Response of Stomata

The stomatal response to blue light can be conveniently studied under a strong background red light, which saturates chlorophyll, the other major photoreceptor of guard cells (see textbook Figure 18.10). This dual beam protocol prevents interference due to photosynthesis-dependent opening, which is also stimulated by blue light absorbed by chlorophyll. Blue light specific opening can also be studied in the absence of background red light by employing weak (< 20 µmol m–2s–1 in the case of Vicia faba) blue light. The blue light photoreceptor system is sensitive to this low level of light, in contest with photosynthesis dependent opening, which requires higher fluence rates (Schwartz and Zeiger, 1984). Weak green light or green light given together with a saturating red light background fails to stimulate stomatal opening or closing and, has been regarded as 'safe light' for experiments studying light-dependent stomatal movements. 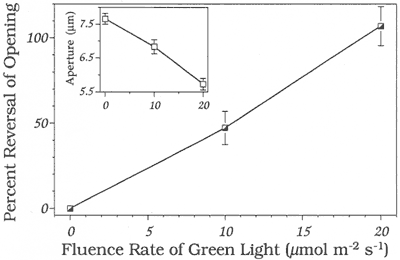 Figure 1   Green light reversal of blue light-stimulated opening in continuous light experiments. Stomata were illuminated with 10 µmol m–2s–1 blue light given alone or together with green light of 10 or 20 µmol m–2s–1. Results are shown as the percent reduction of the opening stimulated by blue light. The inset shows the average final aperture values. Data after Frechilla et al., 2000.

Green light did not inhibit red light stimulated opening, indicating that photosynthesis-dependent opening was not reversed by green light. In dual beam experiments in which blue light was given in conjunction with saturating red light, green light reversed only the blue light-specific stomatal opening.

A green reversal of blue light-stimulated opening was also observed in experiments using short pulses of high fluence rate light (Frechilla et al., 2000). In these experiments, stomata were first placed under a saturating red light background to saturate photosynthetically driven stomatal movement. A 30 sec pulse of strong blue light (1800 µmol m–2s–1) stimulated a transient opening response that depends on the activation of the blue light photoreceptor (see textbook Figure 18.25). Neither red nor green light pulses were effective at stimulating stomatal movement under these conditions. A 30 sec pulse of 3600 µmol m–2s–1 green light given immediately after the blue pulse inhibited the transient opening. A second blue light pulse given after the green pulse restored stomatal opening. Thus the opening response was determined by the color of the last light exposure in a manner analogous to the well-known red/far-red reversibility of phytochrome-mediated responses.

Blue green reversibility of stomatal opening has been observed in a variety of species (Talbott et al., 2002a). These include the dicots Arabidopsis thaliana, Commelina communis and two tobacco species (Nicotiana tabacum and N. glauca) as well as the legumes Vicia faba and Pisum sativum. Among monocots, blue green reversibility has been found in onion (Allium cepa) and barley (Hordeum vulgare). In addition, blue green reversibility has been confirmed in the orchid genus, Paphiopedilum (Talbott et al., 2002b). The dose dependence of the response is identical in all species, indicating that the green light reversal is a basic photobiological property of guard cells.

Elucidation of the mechanism of this novel photobiological property of the blue light response of guard cells should offer new insights on the properties of the stomatal response to blue light response and its photoreceptor. The green reversal could depend on an independent photoreceptor that responds to green light and interacts with the blue light system in a way that causes reversibility. A green light effect has been reported in experiments studying blue light-stimulated phototropic responses in Arabidopsis and lettuce (Steinitz et al., 1985). These effects have been attributed to phytochrome, whose absorption spectrum extends into the green region of the spectrum (Mandoli and Briggs, 1981). However, this green response works in the same direction as the response to blue light and thus appears fundamentally different from the green light reversal of blue light stimulated stomatal opening.

Another possibility is that, as reported for phytochrome, the blue light photoreceptor might undergo a photoisomerization that could account for the blue-green reversibility. This hypothesis would imply that a blue light absorbing, physiologically inactive form is converted to a green light absorbing, physiologically active form, and green light would reverse the conversion. In the phytochrome system, red and far-red driven isomerizations of the phytocromobilin chromophore cause conformational changes of its associated apoprotein which, initiate further events in the signal transduction chain. The strength of the response depends on the balance between active and inactive isomers established by the ratio of incoming red and far red light. Such a system of active and inactive forms of the blue light photoreceptor was previously proposed to explain the response of guard cells to pulses of blue light separated by different time intervals (Iino et al., 1985).

An action spectrum for the green reversal response was constructed by testing the effectiveness of monochromatic light given at 10 nm increments from 470–620 nm in reversing opening stimulated by a constant dose of 450 nm blue light (Frechilla et al., 2000). The resulting action spectrum has a maximum at 540 nm and minor peaks at 490 and 580 nm (Figure 2). This spectrum does not resemble the absorption spectrum of either phytochrome or chlorophyll and thus rules out participation of either of these photoreceptors in the green reversal response. On the other hand, the shape of the action spectrum shows a remarkable similarity to the action spectrum of blue light-stimulated stomatal opening (Figure 2) and to the absorption spectrum of the carotenoid, zeaxanthin, which has been implicated as the blue light photoreceptor for this response (Zeiger, 2000). The 540 nm peak of the green light reversal spectrum is red shifted from the 450 nm maximum of the action spectrum for blue light opening by about 90 nm and the interpeak distance of the red-shifted spectrum shows some broadening. These features are characteristic of spectral shifts caused by isomerization of protein bound polyenes such as carotenoids (Spudich and Bogomolni, 1988). The observed action spectra are thus consistent with a photoisomerization mechanism for the blue green reversal of stomatal opening. 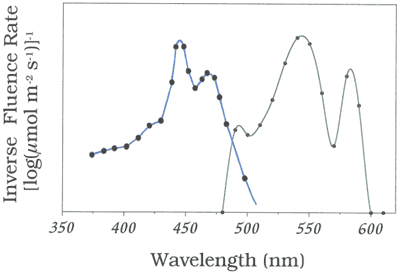 Phytochrome-dependent responses are used by plants to sense red/far-red ratios characteristic of sun or shade conditions. It would be of significant interest to determine whether the blue-green reversal of stomatal movements also represents an adaptive mechanism sensing light quality in the leaf environment.