In this chapter we argued that while motion could be inferred or computed by feature matching, there are neural mechanisms that estimate motion energy and therefore allow us to perceive motion directly. However, for over a century, there have been persistent rumors (and bits of evidence) that under certain circumstances motion perception might involve feature tracking. For example, several experimenters devised clever movies in which the motion energy and the “features” moved in opposite directions. When the movie frames were presented rapidly, one after another, observers reported motion in the direction of the motion energy. However, when there was a significant delay between successive movie frames, observers reported motion in the direction of the features (e.g., Georgeson and Harris, 1990; Smith, 1994).

More recently, Zhong-Lin Lu and George Sperling have argued that there may be three separate motion systems. Not too surprisingly, they call these first-, second- and third-order motion. As discussed in the chapter, first-order motion involves the analysis of motion energy from moving targets defined by changes in luminance (e.g., a dot moving from left to right across a computer screen). Second-order motion (see Activity 8.3: Types of Motion) involves the analysis of motion from stimuli whose motion energy would be invisible or ambiguous to linear (Fourier) mechanisms (e.g., a random dot grid where the dots reverse color as an “object” moves across them). Second-order motion stimuli require a non-linear stage before the extraction of motion energy. Third-order motion is based on feature tracking. Lu and Sperling have devised several ingenious experiments that reveal a third-order motion mechanism.

Image 1 shows four frames of one of their stimuli (which were shown as a movie). The first and third frames consist of alternating areas of high and low contrast random noise. Note that the third frame has been shifted by 180 degrees (so that high contrast areas now occupy the regions that were low contrast in frame 1). The second and fourth frames have alternating areas of white dots on a dark gray background and black dots on a light gray background. Note that the fourth frame has been shifted by 180 degrees (so that the black and white dots have switched positions). All frames were balanced in brightness, so they do not stimulate first-order motion mechanisms. 180-degree shifts define motion that is completely ambiguous. However, when observers were asked to attend to the white dots, they saw coherent motion to the right. Attending to the black dots, on the other hand, led to the perception of coherent motion to the left. Note that the stimulus was identical in both cases, but that switching attention changed the perceived direction of motion. 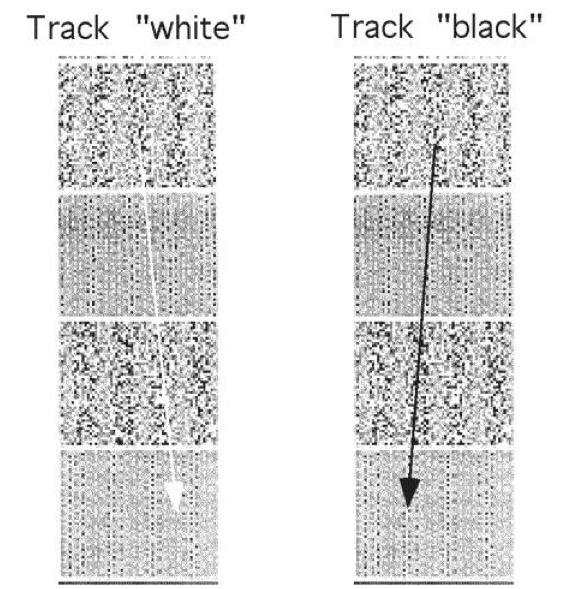 Their results are interesting not simply because they reveal a third type of motion detection, but also because they show that there are “top-down” as well as “bottom-up” processes that can influence motion perception. The fact that volitional attention to one feature (say, white dots) or another (say, black dots) can change the perceived direction of motion is strong evidence for a top-down influence. Thus, you might think that observers could attend to the low contrast regions of frames 1 and 3 rather than the high contrast frames, and also alter the perceived direction. However, when asked to attend to the low contrast regions, observers were not able to see consistent motion. Evidently attention cannot override the strong asymmetry in feature salience inherent in the stimulus (high contrast frames tend to mask low contrast frames).