Whereas the Brewster stereoscope provided home entertainment in Victorian times, in our day 3D movies, TV, and video games are the new stereoscope. Actually, 3D movies have been around for more than 60 years (Image 1). In general, 3D movies make use of stereoscopic photography (which records the images as seen from two slightly different perspectives) and 3D glasses (which separate the images to the two eyes so that disparity provides additional cues to depth). Some of the earliest 3D movies were viewed with “anaglyphic” glasses, with a red lens for one eye and a blue or green filter for the other eye. When the images on the screen were seen through the different-colored filters, one eye saw one set of images, and the other eye saw the other set. You may have seen the anaglyphic method used in comic books. 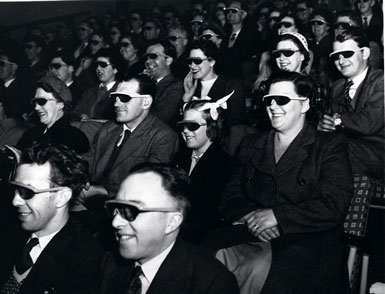 Some 3D movies, TV, and video games use special glasses that contain liquid crystal display technology (known as LCD shutter glasses) and enable the presentation of images to each eye that are synchronized with the images on the movie, TV, or computer screen. In this method, alternate frames of the movie are presented to different eyes. However, the LCD shutter method is not in much use today because the glasses are expensive and the shutters sometimes lag long enough to allow movie frames to enter the wrong eye, weakening the sense of stereoscopic depth.

More recently, filmmakers have been using polarization to separate the images to the two eyes, and polarizing glasses are used to view the films. The polarization method has been adapted to use “frame sequential” presentation, which permits the use of one projector and good isolation of the two eyes’ images and enables the movie theater to charge a few extra dollars per ticket. Early systems used linearly polarized images with vertical polarization in one eye and horizontal polarization in the other, but if the observer tilted her head during the movie then the binocular separation failed. More recent systems use circularly polarized images with clockwise and counterclockwise polarization in the two eyes, which continues to be fully functional if the head is tilted (Image 2). 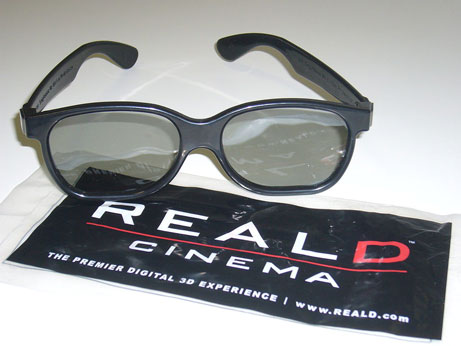 All of the systems described here have the drawback that they require special glasses or goggles to see in three dimensions. However, certain clever methods do not require glasses. For example, in a method known as lenticular printing, the images are digitally split and interleaved (left, right, left, right, …) at a fixed spacing. A special array of many tiny lenses placed on the screen ensures that the left eye sees only the “left” image and the right eye sees only the “right” image. This autostereoscopic setup permits three-dimensional viewing without glasses or other paraphernalia. There are now 3D tablets that use this technology.

The development for the consumer market of virtual reality (VR) technology is making 3D games and movies more widely available. VR technology enables the user to be immersed in a virtual 3D world. Its commercial potential was evident when, in 2014, Facebook bought Oculus, the VR company that developed the pioneering Oculus Rift system, for $2 billion (Image 3). The Oculus Rift was released to the public in 2016 around the same time that the Samsung Gear VR, HTC Vive and Sony PlayStation VR were also released.

As of early 2017, more than six million VR headsets had been sold, far exceeding predictions. Some companies have projected that the VR industry will garner $38 billion in revenue by 2020.