McCann, McKee, and Taylor (1976) brought color constancy into the lab (Image 1). They created a setup in which the left eye was looking at a set of color patches under one light source while the right eye looked at other patches under an independent light source in a different part of the visual world. With this setup they could ask observers to look at a patch shown only to the left eye and match it to the appearance of a patch shown to the right eye. These collections of patches are often called “Mondrians” in honor of Piet Mondrian, the twentieth-century artist whose abstract works look a little like these collections of rectangular patches (you decide; see Image 2 below).

Image 1 This color constancy experiment was conducted by McCann, McKee, and Taylor (1976). In a rich context, the perceived color of a patch is not deteremined only by the excitation of the S-, M-, and L- cone populations at the location of the patch,. It is also strongly influenced by its environment.

In panel 1 of Image 1, the critical patches are the gray and green ones at the center. Under a “white” light, the gray patch reflected equal amounts of S-, M-, and L-wavelength light. The patches in the other eye were illuminated with white light of the same composition. Naturally enough, observers matched the gray patch in the left eye to the gray patch in the right, and they matched green to green.

In panel 4 of Image 1, the illumination of the Mondrian has been changed; it has been made redder. In the illustration, you can see this. In the experiment, the change might not have been noticed, just as you might not notice a change from sunlight to skylight. Under the white light, the green patch produced 120 units of S-cone excitation, 150 units of M-cone, and 70 units of L-cone. If the illuminant were made a bit redder, the same green patch could now be made to produce 100 units each of S-, M-, and L-cone excitation, exactly the same as what the gray patch produced under the white light.

If seen in isolation, the “green” patch would now appear gray, because the three cone types would all be firing at approximately equal rates in response to the light reflecting off the patch. In the context of the Mondrian, however, the patches kept their original, “true” colors. Green looked green, and gray looked gray. The presence of the other colors allowed the colors of the test patches to remain constant over a fairly dramatic change in the nature of the illumination. How is this possible?

This feat of color constancy is possible because the visual system does not just judge colors by the amount of S-, M-, and L-cone stimulation they produce on their own, but by how much stimulation they produce within the context of the lighting of the scene. In panel 4, all of the color patches in the Mondrian appear somewhat reddish, so the visual system makes the assumption of red lighting in the scene and discounts (or subtracts away) some redness from the patches to determine their true color. Thus, even though the “green” patch produced 100 units of S-, M-, and L-cone activation in panel 4, the visual system discounts some of the red (L-cone) lighting, leading to the impression that the patch is green, not gray. 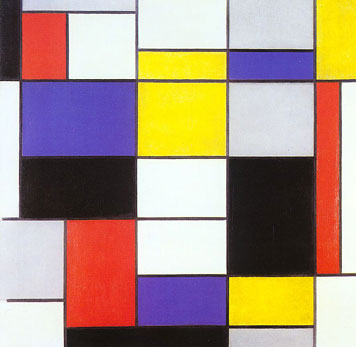 For more information on this topic, refer to the subsection of your textbook called “Physical Constraints Make Constancy Possible” on page 164.