Why Use Opponent Processes?

We have learned that the visual system starts out by coding the color of light via the outputs of short-, medium-, and long-wavelength cones (trichromacy). Each cone response is ambiguous on its own, so retinal ganglion cells and LGN neurons combine the outputs from the three cone types and recode color information in terms of red versus green (R/G), blue versus yellow (B/Y), and black versus white (Bl/Wh) opponent processes. But opponent cell outputs are also ambiguous unless compared against the outputs of different types of opponent cells. So why does the visual system go through the hassle of this recoding process? Why trade one three-dimensional color space (red, green, blue) for another three-dimensional color space (R/G, B/Y, Bl/Wh)?

We cannot know the answer to this question for sure. The human visual system is a product of millions of years of evolution. Careful experimentation can establish how the system works, but experiments cannot tell us why it works the way it does. However, we can speculate about the evolutionary advantage the opponent process outputs might provide over the initial cone outputs. Consider the left-hand picture of Image 1. You almost certainly perceive this to be a small red rectangle casting a shadow on a large orange square, which in turn is casting a shadow on the blue background. But you probably perceive the right-hand image, which includes exactly the same shapes but with different colors, as five separate surfaces.

The shadows in the left-hand image produce exactly the same outputs as their backgrounds in the R/G and B/Y “channels” of the opponent process system. The orange square, for example, activates R+G– and Y+B– cells (because orange can be described as reddish yellow). Since the shadow of the small rectangle is the same hue, it also activates these same opponent process cells. The difference between the shadow and its background will only be registered in the output of the Bl/Wh opponent process: the Wh+Bl– cells will respond more strongly to the brighter orange square than to the darker shadow. In the right-hand image, on the other hand, all five shapes are different hues, so all five will produce different outputs in the R/G and B/Y channels.

Although we almost never notice them, shadows—brightness differences—are scattered throughout almost every visual scene (if you look around carefully, you will probably see them everywhere). But shadows are rarely of interest to us, whereas hue boundaries are important. They divide the visual scene into component surfaces which higher-level vision can then combine into objects. Thus, recoding light wavelengths into dimensions that de-emphasize shadows and highlight surfaces—such as the color opponent dimension—is a very useful thing.

Color Opponent Cells in the LGN

Cells in the LGN seem to be cone-opponent cells, so the transformations that produce the color-opponent processes that support color appearance are likely to be found in the visual cortex. One useful transformation of the information is shown in Image 2. The LGN has opponent cells, and Image 2a shows a cartoon of one such cell’s receptive field. We will call it L+/M–, indicating that it is excited by redder hues in its center and inhibited by greener hues in its surround. (For present purposes, we will not worry about whether this cell is cone-opponent or color-opponent. It is just easier to talk about red and green in this case.) 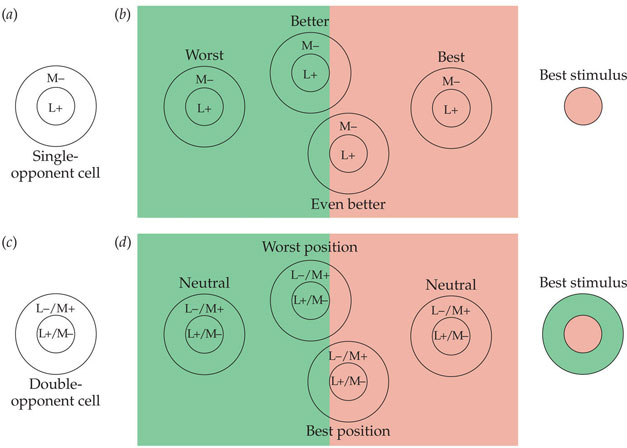 double-opponent cell
A cell type, found in the visual cortex, in which one region is excited by one cone type, combination of cones, or color and inhibited by the opponent cones or color (e.g., R+/G–). Another adjacent region would be inhibited by the first input and excited by the second (thus, in this example, R–/G+).