Chapter 4 of the textbook discusses “perceptual committees” and while we hope that is a useful way to think about what’s going on, it is just a metaphor. There are formal, mathematical models of the way knowledge about regularities in the world constrains the interpretation of ambiguous sensory input. One of the most fruitful approaches is known as the Bayesian approach (Kersten et al., 2004; Yuille and Kersten, 2006). Thomas Bayes (1702–1761), an eighteenth-century Presbyterian minister, was the first to describe the relevant mathematics. 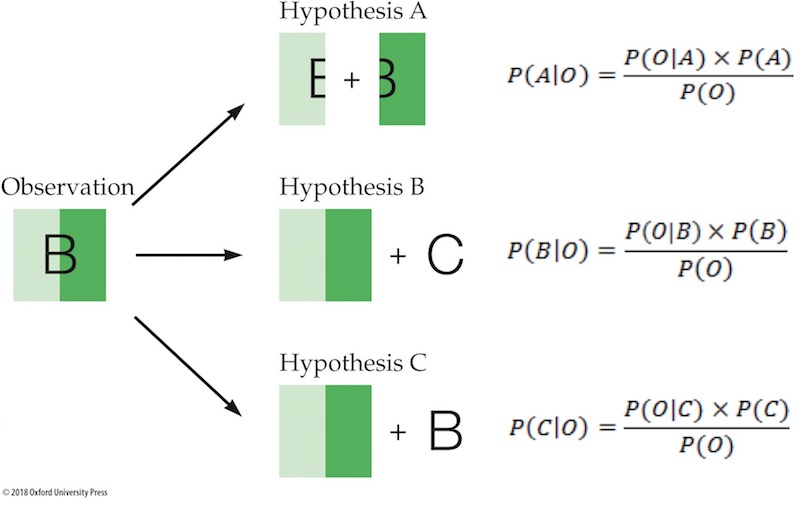 The image above is a version of textbook Figure 4.36. Here, we retell the story of that figure with a bit more formal detail. Our visual system looks at the stimulus and makes an observation (call it “O”). Suppose we wanted to make our best guess as to what situation in the real world produced that observation. Let’s consider three hypotheses, illustrated in the figure:

Of course, an infinite number of other hypotheses could be entertained here (it’s really a chicken, it’s really dinner, and so on), but these three will do as representatives.

Bayes’ theorem gives us a way of computing these probabilities. Specifically, the theorem says:

Let’s unpack this equation a bit. P(A) is the probability that hypothesis A ever happens. Which hypothesis would we think was correct if we had our eyes closed and never made observation O? We don’t know precisely, but given what we know about the world, we can assume that both P(B) and P(C) are likely bigger than P(A), since hypothesis A relies on a very precise and therefore unlikely alignment of a skinny E with a skinny 3. P(A) is what is known as the prior probability; the probability that a given hypothesis is correct before any observations are made.

The term P(O|A), asks, if a given hypothesis is correct, how likely we were to make the observation O. In the figure, hypotheses A and C are likely to lead to observations much like O. Hypothesis B is unlikely. (What are the chances that the letter looks like a B but it is really a C?) So, P(O|A) and P(O|C) are both larger than P(O|B).

The third term, P(O), asks, of all possible observations we could possibly have made, anywhere in the world, what’s the probability of observing O? This number can be difficult to calculate, but thankfully it’s the same for all three hypotheses, so we can ignore the effects of P(O).