Occlusion is a fact of visual life. Take a look around you now. Most of the objects you see are at least partially obscured by other objects. Since so many objects in the environment are occluded, the images they project to your eyes are incomplete. But do you perceive the objects themselves as being incomplete? No. You perceive them as continuing behind the occluded region and emerging on the other side. Despite the fact that the retinal projections of objects in the world are often fragmented, our visual systems overcome this occlusion and allow us to perceive whole, connected objects.

Movie showing a dynamically occluded fire truck. Notice how you perceive a whole, connected object despite the fact that much of the fire truck is occluded by the tree at any given time.

So how do our visual systems cope with dynamic occlusion? Palmer, Kellman, and Shipley (2006) suggest two ways: One way is through the phenomenon of visible persistence. Perception is not an instantaneous process, but rather is extended over time. Static images that are seen in rapid succession are interpreted as a single, continuous perceptual event rather than as a collection of static frames (see Image 1). One frame persists in visual memory after it is no longer physically present and is integrated with the next frame. For instance, movies and television are merely collections of photographs shown at 30 frames per second, but we perceive continuous motion, not static frames. Going back to the fire truck example, when the pieces of the fire truck appear between the branches of the tree we accumulate them over time and string them together to perceive more of the fire truck than is visible in any given moment. The implication of this is that when a moving object passes behind an occluding surface it still remains “visible” in some sense. We still see parts of the fire truck that have become recently occluded, even though they are no longer physically visible. 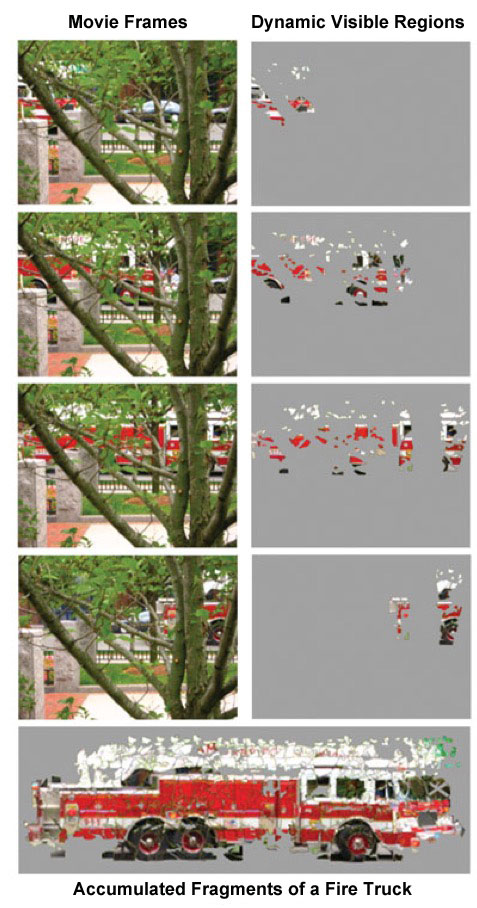 Image 1 All of these images are taken from the movie above. Left column: Static frames from the movie. Right column: Isolated regions of the fire truck that are visible through the leaves and branches of the tree. Bottom: Due to the processes of persistence and position updating, the entire shape of the dynamically occluded fire truck can be perceived over time.

In addition to persistence, another principle that explains our ability to perceive dynamically occluded objects is the notion of position updating. When a visible region of a moving object goes behind an occluding surface, its shape information persists in visual memory and we update its position over time. Even though the occluded fragment of the moving object is not currently visible, we know where it would be if we actually could see it. This allows us to take occluded but persisting regions of the fire truck and integrate them with currently visible regions to form a more complete picture of the whole object, like the fire truck in Image 1.

Taken together, the persistence and position updating processes allow us to perceive dynamically occluded objects even though their projected images are fragmented in both space and time.