If symmetry supports the vase interpretation in the Rubin vase/face illusion, what makes the faces potent enough to compete with that interpretation? Mary Peterson and her colleagues argue that it is the meaning of the contour—the fact that the contour looks like a face (e.g., Peterson and Gibson, 1994a, 1994b). This is illustrated in the image below. Look around the eight images and, for each one, decide quickly if the black or the white region is the figure. In a, c, d, and h, the answer should be quite unambiguous. The face is the figure. In b, e, f, and g, the answer is less obvious even though these stimuli are simply inverted versions of the unambiguous stimuli. In the upright case, the contour has meaning if interpreted as a face. In the inverted case, it does not (refer to Activity 4.7: The Face Inversion Effect). However, in the inverted stimuli, you should still have a tendency to interpret the “face” portion of the image as the figure. 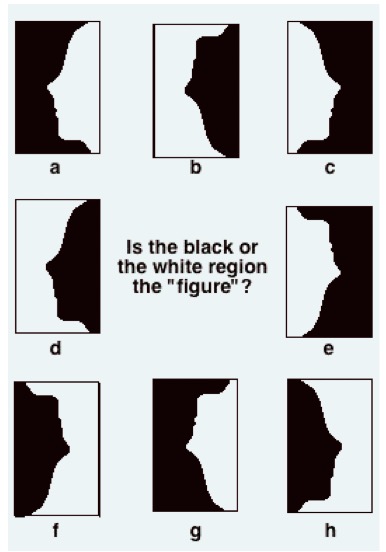 A variation of the Rubin vase/face illustration.

Beyond identifying another principle of figure–ground assignment, the Peterson result is interesting because it sheds light on the architecture of the whole object recognition enterprise. To this point, we have been portraying the process as a one-way, hierarchical series of operations. First you receive the low-level visual information. Then you parse the image into edges and regions. Next you decide which regions are the figures and which are just part of the background. Eventually, you would reach the endpoint of this sequence of operations—object recognition.

However, in Peterson’s experiment, object recognition seems to be influencing the figure–ground segregation stage. How can that be? One answer might be that figure and ground are assigned and then the other processes up to and including object recognition occur and then, only after all those steps are complete, the information about object identity comes back down and influences the dominance of one arrangement over the others. However, that is not what Peterson’s work seems to show. Her work shows that the meaning of a contour influences the initial assignment of figure and ground in an image. This means that object recognition is not a series of steps, each taking place one after the other, with each step dependent on the input from the previous step (refer to Activity 4.1 for more information about such non-linear processing). Instead, we need a more complex view in which even the initial set of edge descriptions is compared with memories of objects seen before. Eventually the chain of perceptual processes (described in the chapter) will yield a fairly elaborate description of an object but even an early, simple collection of edge information can be compared with stored representations of objects. If anything appears to match, then that information can enter into the debate about how figure and ground should be assigned.

One interesting aspect of this finding is the implication that what you expect to see can influence what you will see. As Theseus says, in Shakespeare’s A Midsummer Night’s Dream, “In the night, imagining some fear, how easy is a bush supposed a bear!” (Act 5, Scene 1). That is to say, if you are in the dark woods and you are nervous about the possibilities of lions and tigers and bears, then a little information consistent with something like the profile of a bear could be enough for you to resolve an ambiguous stimulus into an illusory bear percept.

Peterson, M. A. and Gibson, B. S. (1994a). Must figure–ground organization precede object recognition? An assumption in peril. Psychological Science 5: 253–259.

Peterson, M. A. and Gibson, B. S. (1994b). Object recognition contributions to figure–ground organization: Operations on outlines and subjective contours. Perception and Psychophysics 56: 551–564.