Understanding how we haptically perceive space becomes even more fascinating when we find that the impression we have of our bodies in space (called our body image) is highly changeable. We have all heard of clinical reports of individuals with abnormal brain function who report “out-of-body” experiences in which the conscious sense of self lies outside the physical body. It is as if the observer were looking at his or her body, but from someone else’s point of view.

A study by Ehrsson (2007) showed just how easy it is to induce an illusory out-of-body experience in healthy subjects. Here’s how he did it: As depicted in the image below, the participant (let’s call him “Frank”) sat in front of two cameras placed beside each other. Frank wore virtual-reality goggles connected to the cameras for a stereo view. The experimenter stood at Frank’s side and used a plastic rod to stroke his physical chest (unseen by the cameras). Being very careful to use exactly the same timing, the experimenter used a second rod to simultaneously “stroke” Frank’s “phantom chest,” an area in front of and just below the cameras (see the image). Frank could see the back of his body sitting in the chair and the experimenter’s hand moving down toward a point below the two cameras. When asked what he experienced, Frank reported viewing his own body from behind, with his head located at the site of the cameras (like the phantom’s head in the image). In addition he reported feeling the tap on the phantom’s chest just below the cameras. Other subjects concurred. (Ehrsson was careful to address other control questions to ensure that the out-of-body experience could not be attributed to suggestibility or to the subjects’ compliance with the task.) (See Activity 13.4: The Rubber Hand Illusion for another way to elicit an out-of-body experience.) 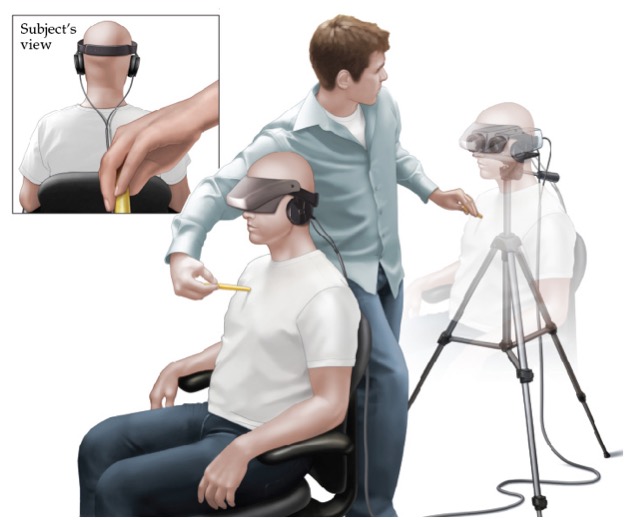 The experimental setup used to induce an out-of-body experience. (After Ehrsson, 2007.)

We are not the only primates who can modify their body schemas. Iriki, Tanaka, and Iwamura (1996) showed how quickly the body images of regular tool-using Japanese monkeys could be modified. The monkeys practiced using a handheld tool, as they would a rake, to retrieve distant food objects. After this task was repeated for only 5 minutes, the visual receptive fields of bimodal cells that received converging inputs from both vision and touch actually grew in size to include the complete length of the tool in addition to the hand. The neuroscientists proposed that such neural modifications indicate that the monkey brain incorporated the tool into the body image as an extension of the monkey’s own hand.