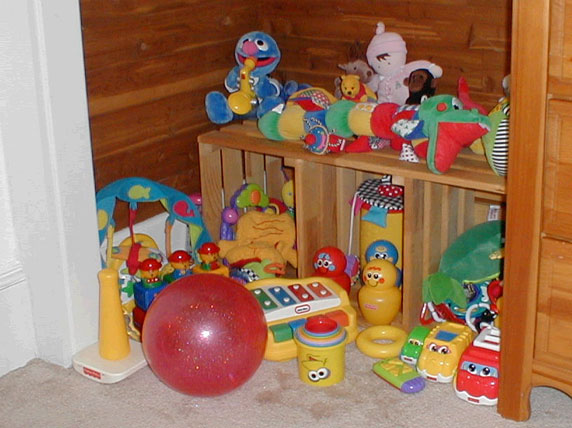 What do you see in the image above?

At the level of the retina, you “see” points of light emanating from the pixels in your computer monitor and exciting your rods and cones. In early visual brain areas, you “see” a collection of oriented lines and a collage of red, green, yellow, and blue patches. But your response to this question was almost certainly not “light” or “lines” or “colors.” What we all perceive in this scene are “toys.” The ability to organize visual sensations into coherent objects and then assign meaningful labels to those objects is in many ways the ultimate accomplishment of vision. These organizational and recognition processes are the subject of this chapter.

Object recognition is a particularly tricky process because, as you will learn in the activity on Object Ambiguity (Activity 4.3), every two-dimensional visual scene that your eyes perceive is actually consistent with an infinite number of three-dimensional interpretations. In general, we overcome this ambiguity by applying “rules,” such as the Gestalt Grouping Principles (Activity 4.2) described by psychologists working in the Gestaltist tradition. (See also the essays on The Role of Knowledge in Figure–Ground Assignment [Essay 4.1] and Dynamic Occlusion [Essay 4.2].)

However, conflicts between these rules inevitably arise, so we also need a system to hash out these conflicts. Your textbook calls this “perception by committee,” a concept embodied in a classic model of letter recognition called Pandemonium (Activity 4.5) and by the more modern theoretical framework of Bayesian Analysis (Essay 4.3). The application of these rules also takes place over time, with information flowing both forwards and backwards through the visual system. The activity on Object Substitution Masking (Activity 4.1) gives a nice demonstration of this forward-and-back, re-entrant processing by the visual system.

Much of the theoretical debate about how we ultimately come up with verbal labels for objects has centered on the empirical question of how good our visual system is at recognizing objects seen from new viewpoints. You can experience what these experiments are like and read about this debate in the activity on Viewpoint Effects (Activity 4.6).

Another debate has revolved around the recognition of a particular class of objects: faces. We appear to process faces quite differently than most other types of objects, as you will see when you do the activity on the Face Inversion Effect (Activity 4.7). Read the essay and linked website on Face Blindness (Essay 4.4) to learn what happens when people lose the ability to recognize faces. In addition, one of the activities shows you how researchers have learned about the object perception abilities of Infants (Activity 4.4).