Optogenetics is a new field of biology that uses light (hence “opto”) to exert temporally and spatially precise control over the functioning of genetically specified cells (hence “genetics”). This approach has particular utility in neurobiology by enabling researchers either to excite or to inhibit selected populations of nerve cells almost instantaneously. Optogenetic control of neuronal firing is accomplished using microbial opsins, light-sensitive proteins synthesized by several different types of microorganisms (of course, the prototypical opsin is rhodopsin, the light-sensitive retinal pigment found in rod photoreceptors).

Two of the opsins most commonly used in optogenetic research are channelrhodopsin-2 (ChR2) and halorhodopsin (NpHR). ChR2, which is made by the green alga Chlamydomonas reinhardtii, forms a cation channel that opens in response to blue light (Figure 1). When a ChR2 channel in a nerve cell membrane is activated, a large influx of positively charged sodium (Na+) ions occurs, as shown in the figure (note, however, that the channel is nonselective and thus is also permeable to potassium, calcium, and hydrogen ions). Primarily because of this inward Na+ current, ChR2 activation causes a rapid depolarization of the cell membrane and a strong excitatory effect on the cell. In contrast, NpHR, which is made by the bacterium Natromonas pharaonis, is a pump that transports chloride (Cl–) ions across the cell membrane when activated by yellow light (Figure 1). As would be expected, the movement of these negatively charged ions into the cell causes a strong hyperpolarization of the membrane and, consequently, an inhibition of cell firing. 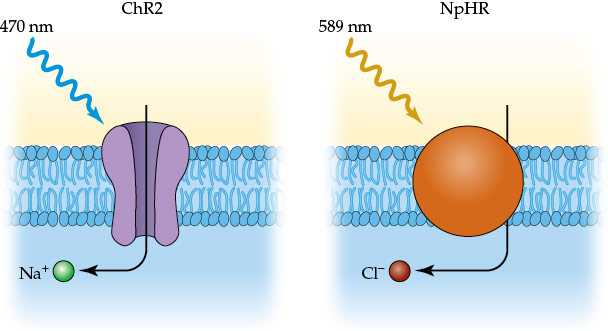 Figure 1 Channelrhodopsin-2 (ChR2) and halorhodopsin (NpHR) and light-sensitive proteins used in optogenetic studies. ChR2 is a cation channel that opens in response to blue light, whereas NpHR is a chloride pump that is activated by yellow light. (After Carter and de Lecea, 2011.)

The power of optogenetics stems from the ability of researchers to express the gene for ChR2, NpHR, or a related opsin in a specific population of neurons using tools such as viral vectors to target the cells of interest. Once the gene-bearing virus has infected the target cells and the opsin transgene has been expressed by those cells, the animal is surgically implanted with an optical fiber aimed at the area containing the target. After the animal has recovered from the surgery, a laser connected to the fiber implant can deliver light of the appropriate wavelength to the target area while the animal is freely behaving in an apparatus such as an open-field or an operant chamber (Figure 2). Using this setup, researchers can determine the behavioral effects of either activating or silencing the specific neurons engineered to express the light-sensitive protein (see Bernstein and Boyden, 2011; Carter and de Lecea, 2011; Tye and Deisseroth, 2012). 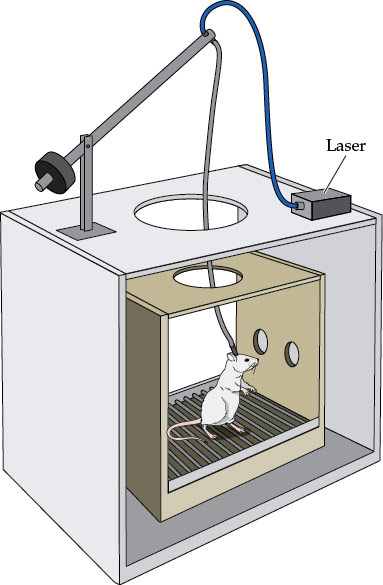 Figure 2 Neurons expressing ChR2 or NpHR can be exposed to light of the appropriate wavelength while the animal is behaving freely in an apparatus such as an operant chamber. Performing an operant response such as a nose-poke turns a laser light generator on for a short period of time to activate light-sensitive proteins in the vicinity of a previously implanted optic fiber. (After Witten et al., 2011.)

Karl Deisseroth and coworkers at Stanford University are among the pioneers in using optogenetic approaches to investigate the neural circuits that mediate motivated behaviors. Two recent studies from this group used optogenetics to investigate the behavioral effects of either stimulating or silencing the dopaminergic neurons of the VTA. The first study involved ChR2 expression in VTA dopaminergic neurons of rats and was designed specifically to examine the role of DA in reward and reinforcement (Witten et al., 2011). Following implantation of the optical fiber, electrophysiological recordings demonstrated powerful excitation of these cells in response to blue light stimulation (Figure 3). The animals were subsequently permitted to trigger a brief train of light pulses by performing a nose-poke response into an “active” port located on a wall of the experimental chamber. To control for nonspecific responses, the chamber also contained an “inactive” port that produced no effect when a nose-poke occurred in that port. As shown in Figure 4 (left bars), animals that had been trained on this task repeatedly responded in the active port but made almost no nose-pokes in the inactive port. When the light stimulus was discontinued for a period of time during an experimental session, the rate of responding was virtually completely extinguished (middle bars); however, responding in the active port was completely reinstated when the laser light stimulus was restored (right bars). These data clearly show that selective activation of VTA dopaminergic neurons can serve as a potent reinforcer to the animal and, therefore, may be “pleasurable” in the same sense that electrical stimulation of the reward circuit is thought to produce a positive hedonic state.

Figure 3 In this experiment, the mesolimbic DA pathway from VTA to NAcc was activated by shining blue light on VTA dopaminergic neurons that had been made to express ChR2. (After Witten et al., 2011.) 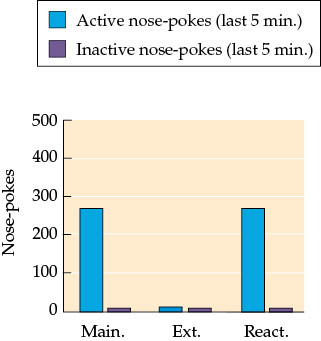 Figure 4 Responding for DA cell activation under maintenance, extinction, and reacquisition conditions. Rats expressing ChR2 in VTA dopaminergic neurons were trained to perform a nose-poke response on a fixed-ratio 1 (FR1) schedule of reinforcement for blue light activation of the cells (1-s train of light pulses at 20 Hz, 5 ms pulse duration). The animals were tested under three conditions for 30 minutes each: maintenance (Main.) condition during which light stimulation was available by responding in the Active port, extinction (Ext.) condition during which light stimulation was temporarily discontinued, and reacquisition (Reac.) condition, during which light stimulation was reinstated. Reinstatement in this condition was signaled to the animals by giving them five stimulus trains of 1-s each, which is similar to the priming drug infusions used in reinstatement studies of IV drug self-administration. The graph illustrates the number of nose-pokes into the Active and Inactive ports during the last 5 minutes of each condition. Note the virtually complete extinction and reacquisition of responding to the Active port, which is reminiscent of responding in a drug self-administration study. (After Witten et al., 2011.)

The second study by the Deisseroth group investigated the role of VTA dopaminergic neurons in depressive-like behaviors (Tye et al., 2012). In this case, both mice and rats were used and the DA neurons were either silenced using NpHR or activated using ChR2 again. Mice expressing NpHR in their VTA DA neurons were examined using two tests of depressive-like behavior, the tail-suspension test and the sucrose-preference test. In the first test, mice are suspended in the air by their tail for several minutes while the amount of struggling behavior is recorded. If an experimental treatment reduces the amount of struggling compared to control conditions, this is interpreted as an indicator of passivity or behavioral despair, conditions that are exhibited by many depressed patients. Figure 5 shows that in NpHR-expressing mice but not controls, stimulation of the VTA with yellow light temporarily reduced the amount of struggling, an effect that was reversed when the light was turned off (importantly, a separate test of locomotor activity showed that the reduction in struggling behavior was not the result of a general decrease in activity). In the sucrose-preference test, the voluntary intake of sucrose-flavored water is measured as an index of hedonic function. Reduced intake of the solution is considered an indicator of anhedonia (inability to experience pleasure), another characteristic often associated with depression. As in the tail-suspension test, sucrose consumption was reduced during optical silencing of VTA dopaminergic neurons but returned to normal following light offset (Figure 6). Finally, experiments with both mice and rats expressing ChR2 in their VTA DA neurons showed that depressive-like behaviors elicited by application of chronic mild stress could be reversed by selective optical stimulation of those cells (data not shown). Taken together, these findings suggest an important role for VTA dopaminergic cell activity in the elicitation of and recovery from depressive-like behaviors.

Figure 5 Effect of silencing VTA dopaminergic neurons on behavior in the tail-suspension test. Mice expressing NpHR in their VTA dopaminergic neurons along with control mice were subjected to the tail-suspension test of depressive-like behavior for a total of 9 minutes while the amount of time spent struggling was measured (top). For the first 3 minutes of the test, both groups showed similar amounts of struggling. However, when yellow light was applied to the VTA of both groups during the middle 3 minutes of testing, there was a significant decline in the amount of struggling in the NpHR-expressing group. When light stimulation was stopped during the final 3 minutes, the amount of struggling in the NpHR group reverted to that of the controls. These effects were observed both when the data were plotted on a minute-by-minute basis (middle) and when the data were collapsed across each 3-minute time block (bottom). (After Tye et al., 2012.) 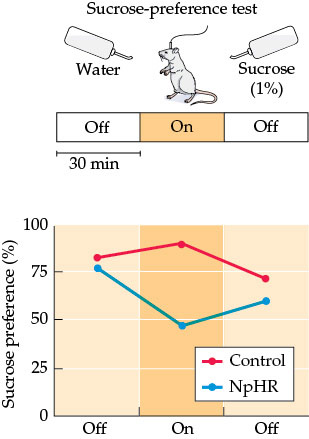 Figure 6 Effect of silencing VTA dopaminergic neurons on behavior in the sucrose-preference test. Mice expressing NpHR in their VTA dopaminergic neurons along with control mice were subjected to the sucrose-preference test of anhedonia. Sucrose preference (amount of sucrose consumed as a percentage of total fluid consumption) was measured during 30-minute time blocks with yellow light applied to the VTA of both groups during the middle block (top). Preference for sucrose was similar in the two groups except for a significant decrease in the NpHR-expressing group during the period of light stimulation (bottom). (After Tye et al., 2012.)

The ability, through optogenetics, to rapidly and selectively turn DA neurons on and off has given us new insights into the involvement of these cells in reward, reinforcement, and perhaps also depression. Because these studies were performed in rats and mice, we don’t yet know whether the mesolimbic DA pathway plays an equally important role in these functions in humans. Nevertheless, results such as those discussed above provide ample reason to investigate more thoroughly whether the dopaminergic system is dysfunctional at least in some patients suffering from major depression, and whether drugs acting on this system might be useful in treating depressive illness.