Recreational use (and abuse) of psychoactive substances occurs in nearly all countries around the world. Because the citizenry of most countries generally believes that substance use should be regulated by the government, various classification systems have been established that specify which substances in a particular country can be legally obtained without a prescription, which are legal but only for medicinal use with a legitimate prescription, and which are banned altogether. Countries additionally set up categories of illicit drugs that affect the degree of regulation imposed on each substance, the amount of resources allocated to controlling that substance, and the criminal penalties associated with conviction for possessing and/or distributing the substance. We have mentioned that in the United States, the relevant classification system is the Schedule of Controlled Substances. Drug classification in the United Kingdom (U.K.) is governed by the 1971 Misuse of Drugs Act that specifies three classes of drugs:

International organizations are also closely involved in the regulation and policing of drug use. For example, the United Nations Office on Drugs and Crime (UNODC) regularly collects regional information on illicit drug production, trafficking, and abuse and incorporates it into an Illicit Drug Index developed in 2005.

Drug classification systems such as the Schedule of Controlled Substances and the Misuse of Drugs Act claim to categorize drugs of abuse according to the actual or potential harm they produce. Thus, the first question we should ask in evaluating these systems is “What kinds of harms are associated with drug use?” The British psychopharmacologist David Nutt, along with several colleagues, proposed three types of drug-associated harms: (1) physical harms, (2) dependence-related harms, and (3) social harms (Nutt et al., 2007). Physical harms are further subdivided into toxic reactions to acute drug use (e.g., heart attack or stroke following cocaine use, death from respiratory failure following heroin overdose), adverse effects of chronic drug use (e.g., dopamine cell damage resulting from repeated methamphetamine exposure, liver damage from chronic alcohol use), and secondary health consequences of IV drug use (e.g., contraction of HIV AIDS or hepatitis B from dirty needles). Dependence-related harms constitute the range of adverse consequences of developing drug dependence (both physical and psychological) and withdrawal upon abstinence. Finally, social harms (adverse effects on individuals other than the user) include harmful events occurring during acute drug intoxication (e.g., damaging property and/or endangering life by driving while intoxicated), effects of the drug user’s behaviors on his/her family and friends, and the financial costs of drug abuse and addiction directly on the healthcare system and secondarily with respect to lost productivity.

Using this system of drug-related harms, Nutt et al. (2007) proceeded to survey a group of addiction specialists for their harm ratings for 20 different individual or class of substances. The rated substances included members of all three classes according to the Misuse of Drugs Act along with legal substances such as alcohol and tobacco. Substances were rated along three separate parameters each for physical harms, dependence-related harms, and social harms, and the resulting nine ratings were combined into a single harm index. Findings from the survey are shown in Figure 1 below, with the color of each bar denoting the class of the corresponding substance*. Even a brief glance at the figure reveals a rather poor correspondence between the classification of these substances and their severity of harm according to the addiction experts surveyed in the study. Clearly, some substances are appropriately classified, such as heroin and cocaine. On the other hand, ecstasy and LSD both have an A classification in the Misuse of Drugs Act and a schedule I classification according to the U.S. Drug Enforcement Administration (DEA) but are rated relatively low on harm. Furthermore, alcohol and tobacco have moderate to high harm ratings but are listed as belonging to no class since they can be purchased and consumed legally. Subsequent surveys by Nutt and colleagues (2010) in the U.K. and by van Amsterdam and colleagues (2010) in the Netherlands have shown similar discrepancies between the classification of many recreational substances and the severity of harms these substances are believed to exert on users, family members and friends, or society at large. Finally, a number of years ago, heroin, cocaine, marijuana, alcohol, nicotine, and caffeine were rank-ordered on five categories of abuse potential by two leading U.S. addiction experts, namely Jack Henningfield, former Chief of Clinical Pharmacology at the Addiction Research Center of the National Institute on Drug Abuse, and Neil Benowitz, a prominent addiction researcher at the University of California at San Francisco. Heroin and cocaine were again ranked extremely high in abuse potential, but alcohol also received a high ranking whereas marijuana received a low ranking for overall abuse potential despite its schedule I classification in the U.S. (Hilts, 1994). 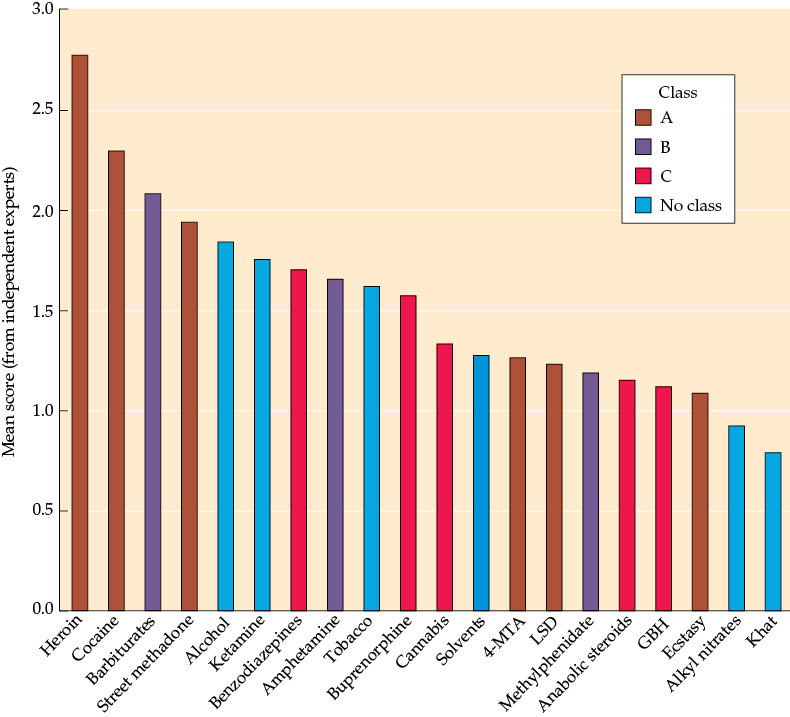 Figure 1 The respective classification under the Misuse of Drugs Act, where appropriate, is shown above each bar. Class A drugs are indicated by red bars, B by tan, and C by purple. Unclassified substances are shown as blue bars. [*Note that some substances have changed classification since publication of the figure (e.g., cannabis from class C to B and ketamine from unclassified to class C).] (After Nutt et al., 2007.)

Taken together, these findings strongly suggest that many addiction experts across different countries disagree with the current legal classifications of some recreational drugs. Examples that fall within this group include ecstasy, marijuana, and LSD. It is important to note that these three substances are not to be considered harmless. Indeed, we discuss the risks associated with each of these substances in the relevant chapter (Chapter 6 for ecstasy, Chapter 14 for marijuana, and Chapter 15 for LSD). However, one might at least question whether the classification of these substances is commensurate with the associated risks or harms based on existing evidence from the addiction research field.

Inappropriate scheduling of drugs potentially has several negative consequences. First, it could mislead users with respect to the risks associated with the use of a particular substance. Second, it could (and probably does) distort the legal penalties associated with being found guilty of possessing or distributing various drugs. Finally, current drug laws are a major impediment to conducting research that could lead to new medications based on heavily regulated categories of substances (Nutt et al., 2013; Nutt, 2015). The relevance of this last issue can be seen in chapters where we discuss examples of medication development involving cannabinoids, hallucinogens, or ecstasy.

The attempt by Nutt and others to rank drugs according to some kind of harm index is not without its critics. For example, despite the fact that the second survey by Nutt and colleagues (2010) attempted to improve on their earlier effort by generating separate ratings for harm to the user versus harm to others, Caulkins and coworkers (2011) strongly criticized the methods used in the study. They additionally argued against the general approach of attempting to compare different substances with respect to the harms they produce, and most importantly they disagreed with the proposition that harm ratings should be used to determine a society’s drug policies. Whereas Weissenborn and Nutt (2012) argue for “the need for a more balanced drugs policy that is free from historical, social, political, or media influences.” (p. 219), the Canadian addiction pharmacologist Harold Kalant proposes that any useful classification system needs to be supported by most members of the society and their elected representatives (Kalant, 2010). Whether we like it or not, such support depends not only on objective criteria (i.e., factual evidence) but also on historical precedence, political considerations (e.g., the alcohol and tobacco lobbies), and individual and collective value judgments regarding the relative benefits and risks of using a given substance. Accordingly, “final decisions [regarding drug classification] do not rest upon scientific knowledge alone, but also on individual value systems and ideologies...and those of scientists are just as varied as those of politicians or ordinary citizens.” (Kalant, 2010, p. 1147).

The Schedule of Controlled Substances is based on legislation passed in 1970, and since that time there have been very few instances of a drug being issued a change in classification. Considering the massive amount of new information on drug abuse and addiction obtained since 1970, perhaps it is time to reexamine the current system and reconsider at least some drug schedules based on this information. Yet it seems that western governments are resistant to such an action. When Jocelyn Elders, Surgeon General of the United States under President Bill Clinton, publicly suggested that the country should at least discuss the possibility of legalizing currently illegal drugs in order to reduce crime, she was roundly criticized by most politicians and later fired by Clinton after making additional controversial statements regarding adolescent sexual behavior. More recently, David Nutt, who was then chair of the Advisory Council on the Misuse of Drugs in the U.K., was fired after releasing a pamphlet criticizing his country’s drug classification system while asserting that the legal substances alcohol and tobacco are more harmful to users and to society than the heavily regulated substances cannabis, ecstasy, and LSD. In the United States, the trend for more and more states to legalize cannabis either for medical purposes or for both medical and recreational use (see Chapter 14) indicates that at least locally, changes can occur in drug laws. Similar changes at the federal level are not yet evident, although recent articles in the popular press show that people are increasingly questioning our rather antiquated drug classification system (Ingraham, 2018).