The techniques of neuropharmacology and behavioral pharmacology are most often combined to test hypotheses of how drugs act on CNS neurons to alter behavior. Approaching a problem from several different directions reinforces the underlying model if results are consistent. Any discrepancies will cause the conceptual model to be changed and provide an avenue for future research. In one such study, Picciotto and colleagues (1998) created knockout (KO) mice that lacked one specific subunit of the acetylcholine receptor. Such a mutation did not produce animals lacking all acetylcholine receptors, but only those containing the β2-subunit. What they discovered was that although the KO animals looked just like their littermate controls, receptor binding studies showed that they lacked the ability to bind nicotine in the brain.

Several different methods were used to show the animals’ lack of sensitivity to nicotine. Using in vivo microdialysis in combination with HPLC, they found that in contrast to control animals, intraperitoneal nicotine administration failed to cause dopamine to be released in the striatum of the KO mice (Figure 1). Evaluating the electrophysiological discharge rate of dopaminergic neurons also showed no response to nicotine in brain slices from the KO mice, while controls responded with a moderate increase in frequency (Figure 2). 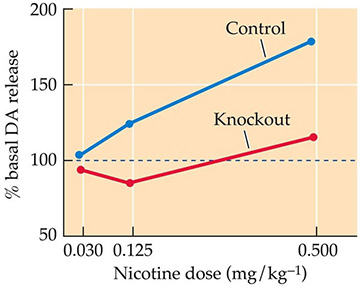 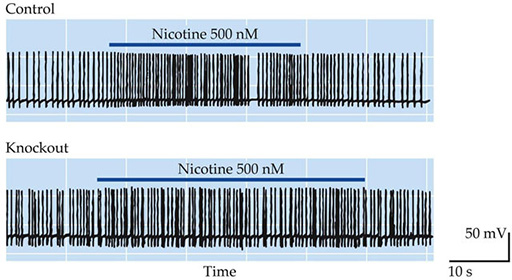 The ability of nicotine to increase motor activity and produce reinforcing effects is believed to be due to nicotine-induced increase in dopamine function. The previous experiments showed that the KO animals failed to respond to nicotine with an increase in dopamine. Hence the researchers predicted that the mutant mice might show differences in locomotion and also fail to self-administer nicotine. Surprisingly, behavioral measures showed no differences between the two groups in spontaneous exploration in a novel environment (Figure 3). However, when they were in a familiar environment, locomotor activity was reduced by 50% in the KO animals compared to controls. These results suggest that endogenous (normally occurring) acetylcholine might act through this subtype of acetylcholine receptor to regulate locomotion but not exploratory behavior in a novel environment. The differences measured in these two tests of motor activity show why even simple behavioral measures must be evaluated cautiously. 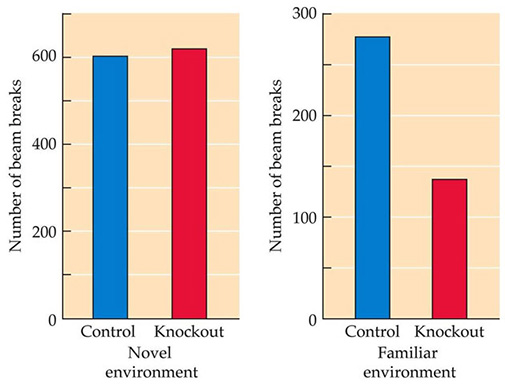 To see whether nicotine is reinforcing for the KO mice, a self-administration experiment was devised. The animals were trained to work for intravenous cocaine injection. Once a stable baseline of responding for cocaine was achieved, the cocaine was replaced with nicotine or saline. Control mice maintained a significant amount of responding for nicotine over a 5-day period, but the response of mutant mice was significantly different (Figure 4). The KO mice showed a decrease in response over the 5 days, suggesting that the available nicotine injections were not reinforcing. The response for nicotine in KO mice resembled the low response rate produced by a replacement with saline in normal mice. It would seem that altering the acetylcholine receptor prevents the stimulation of dopamine neurons and also prevents the self-administration of nicotine. From these data and other evidence (Stolerman et al., 1995), the authors concluded that the specific subunit of the acetylcholine receptor that was knocked out is vital for the normal dopamine-enhancing effects of nicotine and the addictive properties of the drug. 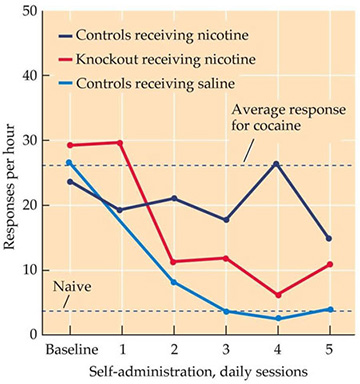