There are clinical reports that abstinent human addicts sometimes relapse (return to their drug abuse) when confronted with stressful life events. As an example, the following true vignette was narrated by a woman who was addicted to alcohol and cocaine and who had been in treatment and recovery for the previous 6 weeks:

“It was late at night in the spring. I was at my sister’s place. I remember her saying, ‘You are so smart … why are you wasting your life?’ I remember she said, ‘I have been around drugs, I should have been the drug user, but I didn’t, and why did you turn out a loser?’ She didn’t know how it was making me feel. I felt I had to leave. I could not handle those emotions in that period of my life. I was withdrawing. I was trying to leave. I told her, ‘I don’t want to talk about this; I can’t talk about this in this condition.’ I was sad; I was very sad. I was sad because I had no answers for her . . . you know . . . I didn’t know what to tell her. I went and got the telephone and I called for a ride. I remember I had dropped the cordless phone and um . . . she yelled at me. ‘You bitch, you’re a crackhead; you can’t buy me another phone.’ I’ll never forget that statement . . . and um . . . I ran out of the house. I was very, very distraught, I was crying, and I wanted to use so badly. As a matter of fact, there was a bar right around the corner. It had to be around 1 am, because I remember I went to that bar and I would say it was a little after 1 am when I drank till it closed at about 2 am. I felt disgusted . . . just thinking of it . . . I can remember . . . I almost felt like nauseous . . . anxious . . . very anxious . . . I had to . . . it’s a terrible feeling . . . I don’t even like to think about it . . . but I had to have a drink. Like I said, all I can remember is feeling nauseous, like an upset stomach. I would have to say I felt tense, like in my shoulders and all over. My heart was racing, and I felt like I was burning up. I just had to get out of there, and all I could think of was having a drink.” (Sinha, 2007; p. 388)

Evidence for an involvement of stress in addiction relapse has led researchers to investigate the interactions between abused drugs and components of the hypothalamic–pituitary–adrenocortical [HPA] system (so named because synthesis of CRH, ACTH, and cortisol occurs in the hypothalamus, anterior pituitary, and adrenal cortex respectively), which is strongly activated by stressful stimuli. The issues addressed in this research include: (1) the influence of abused drugs on HPA system activity, (2) whether the HPA system is dysregulated in drug addicts, and (3) possible modulation of drug reward by HPA system hormones, particularly cortisol (the major glucocorticoid synthesized by humans, nonhuman primates, and other large animals) and corticosterone (the major glucocorticoid synthesized by rodents). In the present discussion we will focus on the psychostimulants cocaine and amphetamine (see Chapter 12), two drugs that are highly addictive and have been studied extensively with respect to stress and the HPA system.

Both cocaine and amphetamine stimulate the secretion of cortisol and ACTH in healthy human subjects, and similar effects have been found in studies of experimental animals by measuring corticosterone instead of cortisol (Mello and Mendelson, 1997; Oswald et al., 2005). Two studies have reported elevated baseline (unstimulated) levels of cortisol (compared to control subjects) in abstinent cocaine-dependent subjects enrolled in an inpatient treatment program. In one case, this elevation was observed only during the first 2 weeks of treatment, which could indicate that the difference between groups resulted from drug withdrawal in the cocaine-dependent subjects (Contoreggi et al., 2003). However, a later study performed by a different research group found elevated cortisol over an entire 4-week period in abstinent cocaine-dependent women (Fox et al., 2008). This finding could mean that withdrawal effects persisted for longer than in the first study, or that repeated cocaine use led to a long-lasting dysregulation of the HPA system. Moreover, because this was a retrospective study, we cannot rule out the possibility that the elevated level of cortisol in the cocaine-dependent subjects was a pre-existing condition unrelated to their drug use. Because of the obvious difficulties inherent in studying cocaine addicts in their natural environmental, we do not have information on whether the HPA axis is chronically activated during the period of drug use before individuals enter into treatment. Nevertheless, considering that cocaine acutely stimulates cortisol secretion, the results from the two studies could also be taken to mean that the HPA axis is persistently overactive in cocaine-dependent individuals as long as they continue to use.

If the last interpretation is correct, does the increase in cortisol have any impact on the addict’s response to cocaine? Before discussing current clinical findings relevant to this question, it is worth noting that considerable research has been conducted on the influence of stress and glucocorticoid hormones on responses to cocaine and amphetamine in experimental animals. In parallel with their high addiction potential, psychostimulants are very reinforcing to animals. For example, rats, mice, and even primates will self-administer these drugs by performing an operant response such as pressing a lever (see Chapters 9 and 12 for more information). Psychostimulants also produce increased locomotor activity when given to rats and mice in low doses. Numerous studies have shown that stress generally enhances the responsiveness of rats and mice to psychostimulants, as measured in several different ways (Logrip et al., 2012). First, prior stress increases the locomotor-stimulating effects of amphetamine or cocaine. Second, stress can enhance the initiation or increase the rate of psychostimulant self-administration under the appropriate conditions. Third, stress can enhance psychostimulant-seeking behavior in animal models of drug relapse. In such studies, the animals are first conditioned to self-administer the drug (cocaine, for example) on a daily basis. Once the self-administration response has stabilized, the animals are subjected to a prolonged period of behavioral extinction in which no drug is given regardless of how many times the lever is pressed. At this point, there is usually very little behavioral responding by the subjects. However, several studies found that exposure of rats to a foot shock stress for just 10 or 15 minutes prior to testing led to a large increase in lever pressing, even though there was still no cocaine available to the animals (Logrip et al., 2012). Based on these findings, it appears that stress increases the motivation for drug-seeking behavior in animals, just as it does in humans. It is important to note that this effect is selective, since it does not carry over to other motivational systems such as food reward.

Since we know that stress causes the release of glucocorticoids from the adrenal cortex, could these hormones be involved in the effects of stress on psychostimulant sensitivity? The answer appears to be yes. An early study by Erb et al. (1998) found that adrenalectomy (surgical removal of the adrenal glands) of rats prevented the ability of foot shock stress to reinstate lever pressing in a cocaine relapse model. However, when adrenalectomized rats were treated with corticosterone, foot shock had the same effect as in normal animals. Later studies demonstrated that inactivation of the glucocorticoid receptor gene either throughout the brain or selectively in neurons that express D1 receptors for the neurotransmitter dopamine greatly reduces the propensity of mice to self-administer cocaine (Deroche-Gamonet et al., 2003; Ambroggi et al., 2009). These results demonstrate not only that glucocorticoids acting through the glucocorticoid receptor enhance cocaine reward, but also that this effect is mediated by the dopamine system.

Relevant findings from humans are not as clear cut as those from animal studies, because we cannot adrenalectomize human participants for experimental purposes or perform the types of genetic manipulations available for mice and rats. One approach used in human clinical studies has been to look for relationships among stress-induced cocaine craving, stress-induced cortisol responses, and the incidence of relapse in cocaine-dependent individuals being treated for their addiction. A study conducted by Sinha and colleagues (2006) using this approach found that subjects who exhibited high levels of stress-induced craving and cortisol increases tended to relapse more quickly and/or to use more cocaine during a 90-day follow-up period than subjects who exhibited lower levels of stress-induced craving and cortisol release (Figure 1). These results raise the possibility that cortisol release in response to stress contributes to the maintenance of the cocaine-dependent state. Other investigators have used experimental approaches in which either 1) cortisol levels were elevated by direct administration of the hormone to the subjects, or 2) cortisol levels were reduced by treatment with a cortisol synthesis inhibitor such as ketoconazole or metyrapone. A small pilot study involving cortisol administration reportedly led to increased drug craving in cocaine-dependent subjects (Elman et al., 2003), which seems to implicate cortisol in modulating the intensity of cocaine craving within this population. Moreover, a recent 6-week treatment study using a combination of metyrapone and the benzodiazepine oxazepam (an anti-anxiety medication) found a dose-dependent reduction in both cocaine craving and cocaine use in the treated group compared with control subjects given a placebo instead (Kablinger et al., 2012). Unfortunately, no subjects were given only metyrapone or oxazepam to determine whether one of these compounds was more important than the other for the observed therapeutic benefit. Moreover, earlier studies using metyrapone or ketoconazole alone found no effects on either cocaine-induced euphoria or the desire for cocaine (Ward et al., 1998; Winhusen et al., 2005). Taken together, these findings suggest that stress-induced cortisol may have some influence on cocaine craving and the risk for relapse in cocaine-dependent individuals. However, this effect seems to be relatively modest compared to the more important role for corticosterone in cocaine-seeking behavior in rodents. 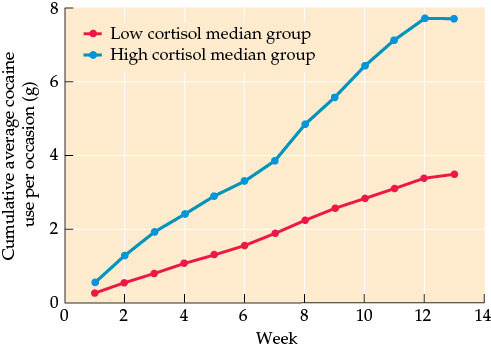 Figure 1 Relationship between stress-induced cortisol levels and subsequent cocaine use during a 90-day follow-up of treated cocaine-dependent subjects. Subjects received 2–4 weeks of inpatient treatment for cocaine dependence. During the treatment, they were tested for their cortisol responses to a guided imagery session in which they re-experienced previous life events that were highly stressful. The plasma cortisol increase above baseline level served as each subject’s stress response. During the follow-up period after the conclusion of treatment, the patients kept a record of the number of occasions of cocaine use and the average amount of drug taken per use. The graph illustrates that when a median split was used to divide the subjects into the top and bottom 50% of stress-induced cortisol increases, the high response group used much more cocaine than the low response group, particularly as time elapsed since the end of the treatment. (After Sinha et al., 2006.)