As mentioned in the text, metabotropic receptors signal by activating a group of membrane proteins called G proteins. These proteins were named because they each possess a binding site for guanine nucleotides, specifically guanosine diphosphate (GDP) and guanosine triphosphate (GTP). Each G protein contains three subunits designated α, β, and γ, the latter of which possess the guanine nucleotide binding site. A number of different α subunits have been identified, and these subunits play a key role in which neurotransmitter receptors couple to a particular G protein and which second messenger system is activated or inhibited by that G protein. The diversity of α subunits gives rise to three families of G proteins: Gs family, Gi family, and Gq family. Gs was named because the first discovered member of this family signals by stimulating the cAMP second messenger system, whereas Gi was named because of its ability to inhibit cAMP synthesis. In contrast, Gq signals by activating the phosphoinositide second-messenger system.

Figure 1 below illustrates the cycle of G protein activation and subsequent inactivation triggered by binding of a neurotransmitter agonist to a metabotropic receptor. In the inactive state (A), the guanine nucleotide binding site on the α subunit is occupied by a molecule of GDP. When an agonist molecule binds to the receptor, the receptor couples to the G protein, which causes GTP to be exchanged for GDP on the α subunit (B). The next step is for the newly-activated G protein to uncouple from the receptor and for the α subunit to dissociate from the β and γ subunits, which remain together as a dimer. Both the α subunit and the βγ dimer can engage in cellular signaling. For example, αs (the α subunit belonging to Gs) can activate adenylyl cyclase, thereby increasing the rate of cAMP synthesis by the cell. α i, the α subunit belonging to Gi, can inhibit adenylyl cyclase, thereby reducing the rate of cAMP synthesis. 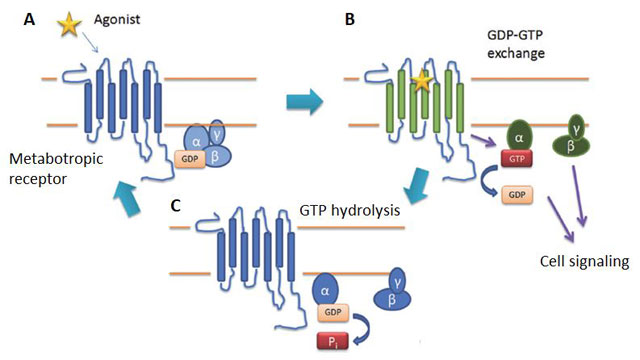 As mentioned in the text, metabotropic receptors can also stimulate or inhibit the opening of certain kinds of ion channels. This function is often mediated by βγ dimers (e.g., Gi stimulation of K+ channel opening, thus causing membrane hyperpolarization). Completion of the G-protein cycle occurs when GTP is hydrolyzed to form GDP (releasing a phosphate group shown as Pi), a reaction that is catalyzed by the α subunit itself. Once this occurs, the  subunit reassociates with the βγ dimer, returning the G protein to the inactivate state in which it is ready to be activated again by a metabotropic receptor.