Epilepsy is a common neurological disorder that consists of recurrent disturbances of electrical activity in the brain involving large ensembles of neurons. These cells fire synchronously (at the same time), producing distinct electroencephalograms (EEGs) that vary with the type of seizure. The EEG reflects the summation of electrical activity of tens of thousands of neurons in the cerebral cortex beneath the electrodes pasted to the outside of the skull. EEG recordings show that in healthy individuals, neurons fire at different times, so the wave looks rapid and choppy and low in amplitude (Figure 1). During a seizure, clusters of neurons fire at the same time, so the record appears with slow and rhythmic frequency but high amplitude. Although there are many events that can initiate a seizure, once the abnormal bursts of action potentials begin it spreads from the origin (called the focus) to surrounding neurons and via synaptic pathways that are connected to the original site. Generalized seizures appear to start in multiple brain areas all at once and involve large areas of the cerebral cortex. The physical signs of the seizure depend upon which brain areas are involved in the uncontrolled electrical activity. Although none of the individual neurons are abnormal, the regulation of their firing is atypical.

An additional characteristic of seizures is that they spontaneously end in 15 seconds to 5 minutes because neurons become depleted of ATP. Vast amounts of energy are required to maintain the high rate of firing, because the Na+–K+ pump utilizes ATP to restore the balance of ions that is needed to generate further action potentials. However, some abnormalities in the EEG are still apparent between seizures, and the subtle differences are useful in diagnosing the particular type of seizure.

While the precipitating factor for the onset of epilepsy is not known in some cases and is apparently developmental, in other cases the origin of the recurrent seizures is linked to a brain injury that makes neuronal circuits hyperexcitable, leading to spontaneous recurrent seizures. The types of brain injury are varied and include intrauterine and neonatal damage, stroke, damage caused by environmental toxins or drug use, brain trauma such as occurs during an auto accident, and so forth.

Although diagnosis depends on evaluating the EEG records, intracellular recording with microelectrodes is needed to examine the cell function of individual neurons within the seizure focus. The normal action potential of a neuron (Figure 2) involves the gradual change in membrane potential to the threshold, rapid depolarization (the spike) caused by the opening of voltage-gated Na+ channels, rapid repolarization (a return toward resting potential during the absolute refractory period), and characteristic hyperpolarization. Neurons within the seizure focus appear to differ in several respects. First, the depolarization is higher voltage and continues for a longer period of time, during which mini-spikes are evident. The occurrence of the mini-spikes is the likely explanation for the recruitment of adjacent neurons during the seizure. Second, the hyperpolarization (relative refractory period) that occurs is both greater in magnitude and also extends for a longer period of time. 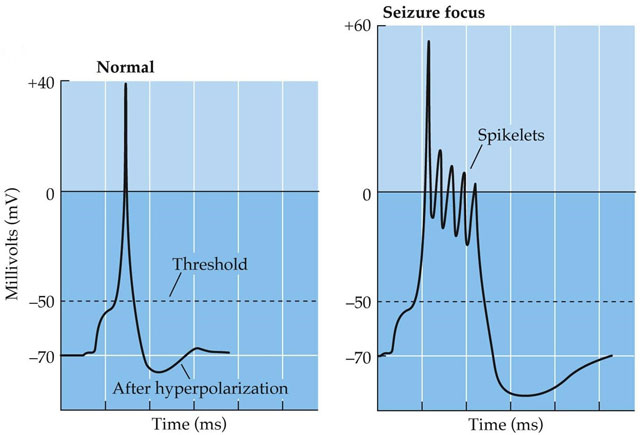 Among the pharmacological treatments for seizures is the drug phenytoin (Dilantin). Phenytoin, which represents one strategy for seizure control, acts by changing the normal cycling of the voltage-gated Na+ channels that are responsible for the massive depolarization (spike) of the action potential. Phenytoin binds to the channel during the absolute refractory period, when it is closed and cannot be opened, holding it in that state. By preventing the mini-spikes, the drug prevents the spread of electrical activity to adjacent cells.

A second strategy is to enhance neurochemical inhibition. Increasing inhibition may keep cells in the focus from reaching the threshold for firing or prevent the recruitment of associated neurons. Drugs that increase the inhibitory effects of the neurotransmitter GABA (γ-aminobutyric acid) are discussed in Chapter 17.