A startling case history documented and compiled over a number of years by David Rosenthal and colleagues at the National Institute of Mental Health (Rosenthal, 1963) has provided fascinating insights into the interaction of genetics and environment. The study involved a set of identical female quadruplets born in 1930, all of whom have schizophrenia. They were nicknamed the Genain quadruplets to protect their identity; genain is Greek for “dreadful gene.” The in-depth case study was warranted because the probability of the birth of quadruplets developing a relatively rare disorder is quite low. This “experiment of nature” provided a rare and valuable database. The data collected came from years of interviews with all family members by case workers; interviews with members of the community who knew the family personally; records from schools, physicians, clinics, and hospitals; newspaper accounts of the family; an elaborate family scrapbook begun by the siblings’ mother at the time of birth; and a variety of psychological test results. A synthesis of this work can be found in a text edited by David Rosenthal and colleagues, The Genain Quadruplets: A Case Study and Theoretical Analysis of Heredity and Environment in Schizophrenia.

The monozygotic (coming from a single fertilized egg) quadruplets shared the same genetic predisposition to schizophrenia and they were raised in the same dysfunctional family. Yet it is clear that they exhibited the disorder in different ways. Although we tend to think of children raised in the same family as experiencing similar good and bad parenting, both prenatal and family experiences can and do differ between siblings. Apparently, even identical quadruplets can experience very different social and emotional environments within the same household. For instance, an individual child’s behaviors evoke reactions from those around her, which in turn influence the child’s responses. Hester, the least-favorite daughter, cried more than the others after coming home from the hospital, contributing to stress and anxiety in the family. Her “bad” image persisted through childhood, and she was described by her parents as a habitual masturbator at age 3 (which was more a problem for the parents than for the child). Her response to the correction and criticism was to display temper tantrums and damage property. She continued to have social problems as she grew up, and at the time of her hospitalization at age 24, she was living in a world dominated by fear, anxiety, and anger. Not only did the four sisters display different symptoms over the years, but their ages at the first hospitalization varied (ages 22, 23, 24, and the last more than 10 years later). The actual age of onset of schizophrenia is more difficult to determine, since psychopathological behaviors frequently show gradual appearance. An example taken from Rosenthal describes Nora, who had a background of “nervousness.” At age 19, Nora developed phobias and compulsions about telephones and getting tuberculosis. At age 20, she developed crying spells, nausea, increased tiredness, and bodily concerns and symptoms. She regularly “visualized” her father in a casket. At age 21, she could no longer cope with the stresses of work and quit her job. During this time she walked and talked in her sleep, was dysphoric, and would stand on her elbows and knees until her elbows bled. However, a coworker to whom she wrote said that her letters were perfectly rational. Soon after she had suicidal urges and thought she was mentally ill. At age 22, she felt people were talking about her and walking on her and that she was losing her eyesight. She experienced panic, had severe “head pains,” and stayed in bed day and night. At this point she was hospitalized for the first time. From this example you can see that distinguishing between prodromal pattern (symptoms occurring before diagnosis) and time of onset of schizophrenia is not a simple task.

The quadruplets differed not only in the variety of symptoms they displayed and age of first hospitalization but also in the ultimate outcome of their disease. The four of them represent the full range of possible outcomes. After the initial episode, Myra was never hospitalized again, and at the time of writing she seemed contentedly married. Nora was hospitalized repeatedly but had a marginal adjustment while outside the hospital. Iris experienced more-chronic hospitalization, and her clinical condition fluctuated from periods of severe catatonic withdrawal and disorganized symptoms to times of marginal adjustment when she was able to leave the hospital. Hester further deteriorated and remained hospitalized.

These four individuals with identical genes shared a vulnerability to schizophrenia but differed significantly in their expression of symptoms and the course and outcome of the disorder. The interpretation of the data leads to the conclusion that both pre- and postnatal environmental stressors clearly interact with genetics to determine the ultimate outcome. 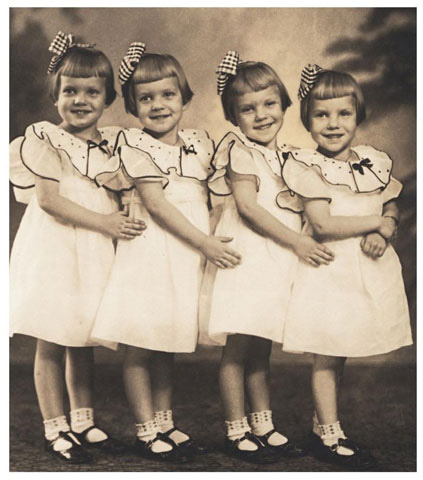