Of the available models for schizophrenia, one in particular meets many of the objectives of conventional testing. Among the symptom clusters characteristic of schizophrenia, the information-processing abnormalities that contribute to the illogical thinking and disorganized behavior has been modeled effectively. The model called prepulse inhibition (PPI) of startle focuses on the failure of individuals with schizophrenia to “gate,” or screen out, irrelevant stimuli. By failing to screen out incoming information, they are bombarded by stimuli, causing sensory overload, fragmented thinking, and thought disorder. Prepulse inhibition refers to a reduction in the reflex startle response to a strong, rapid onset stimulus (either a sudden loud tone or sudden bright light) when it is preceded by a prepulse (occurring 30 to 500 milliseconds before) that is too weak to elicit a startle response itself. The experimental design is shown in Figure 1. Apparently, under normal conditions the prepulse activates a neural circuit that inhibits the reflex to the second stimulus. Although the startle response itself is a relatively simple reflex, the inhibition of the reflex is exerted by a neuroanatomical circuit involving the limbic cortex, striatum, globus pallidus, and pontine reticular formation. Abnormalities in each of these brain areas have been implicated in the etiology of schizophrenia; therefore, failure of the prepulse to inhibit the startle response would be anticipated. Many studies have shown that PPI is diminished in schizophrenia, which means that patients do not inhibit the startle as effectively as normal subjects, as shown in Figure 2. Deficits in PPI occur in other clinical conditions that involve some part of the cortical–striatal–pallidal–pontine circuit, such as obsessive–compulsive disorder, attention deficit disorder, Huntington’s disease, and others. Thus, PPI deficiency is associated not with a specific psychopathology but with deficits in gating resulting from abnormalities in a particular brain circuit. 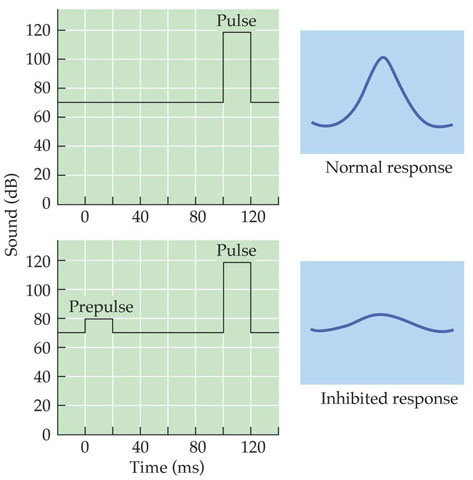 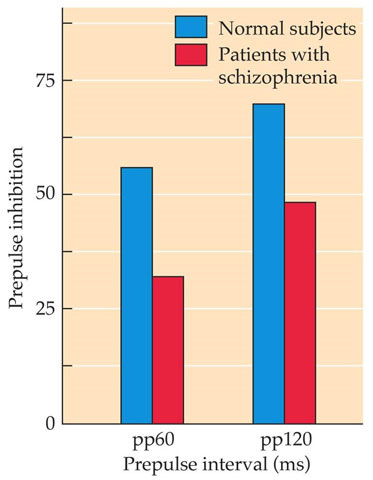 PPI has several advantages that make it an appealing animal model. First, the reflex is simple to measure and produces reliable results. PPI is exhibited in virtually all mammals, including primates, and requires no training. In human studies the eye-blink reflex is measured, while in rats the whole-body flinch is evaluated.

Support for the dopamine hypothesis comes from findings that PPI is disrupted by systemic administration of dopamine agonists and reinstated by dopamine receptor–blocking antipsychotic drugs. That is, treatment with apomorphine or other dopaminergic drugs interferes with the normal gating function. The ability of antipsychotics, including the atypical antipsychotic clozapine, to restore PPI in apomorphine-treated rats at doses that strongly correlate with clinical potency further validates this model (Figure 3). Manipulation of other neurotransmitters also produces deficits in PPI. In support of the hypoglutamatergic model of psychosis, NMDA receptor antagonism by PCP or ketamine disrupts PPI. The NMDA antagonism by PCP is of special interest because PCP-induced PPI deficits are not reversed by classical neuroleptics, but are reversed by clozapine and similar atypical antipsychotics. Such a distinction may be valuable in developing novel therapeutic compounds. 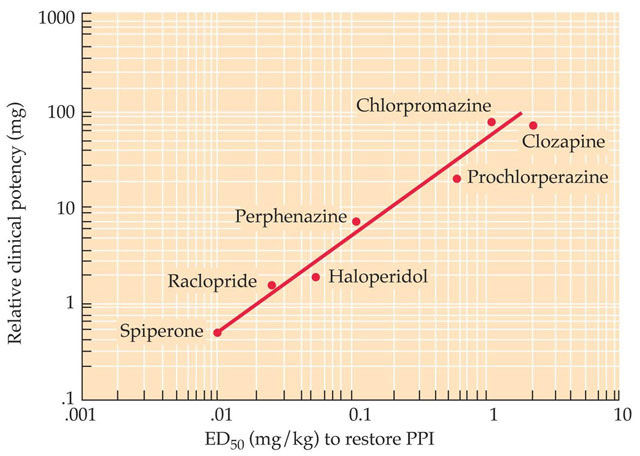 Since structural or functional abnormalities in schizophrenic patients have been reported at every level of the gating circuit as well as in glutamate and dopamine function, the PPI model may provide unique information on the pathology underlying schizophrenia. Chapter 19 described the interaction of factors that contribute to the occurrence of schizophrenia: genetic, anatomical, and environmental. The PPI model is especially appealing because it responds to each of these factors. First, genetically distinct rat strains differ significantly in the dopaminergic modulation of PPI. Also, rats that have been bred for apomorphine sensitivity or lack of sensitivity show parallel differences in PPI. Thus, if genes control susceptibility to apomorphine-induced gating disruption, such a model may provide information about genetic-mediated susceptibility to schizophrenia. Second, some evidence suggests that early brain lesioning may have an impact on apomorphine-induced disruption of PPI in an adult animal. Neonatal lesions of the hippocampus (see Web Box 19.4) and surgical manipulations of the cortical–striatal–pallidal–pontine circuit also interfere with PPI performance. Third, developmental influences such as isolation stress early in life significantly reduce PPI demonstrating impaired gating, and this effect is reversed by both typical and atypical antipsychotic drugs (Varty and Higgins, 1995). Such parallels make PPI modeling of schizophrenia a particularly appealing design and one that may provide a good deal of new information.

A more detailed description of these experiments and the PPI model can be found in Geyer and Ellenbroek (2003).

Varty, G. B. and Higgins, G. A. (1995). Examination of drug-induced and isolation-induced disruptions of prepulse inhibition as models to screen antipsychotic drugs. Psychopharmacology, 122, 15–26.