In recent years research has focused on brain stimulation techniques to relieve the symptoms of depression because many patients gain only minimal benefit from antidepressant drugs or cannot tolerate the side effects. Even for those who show great improvement, relapse rates are high. Further, as we learn more about the complex neuronal networks involved in depression, it appears more likely that brain stimulation can be used to alleviate chronic depression that is resistant to other forms of treatment.

In the early 1900s, a Hungarian psychiatrist noted that several of his patients showed improvement in their moods after having spontaneous seizures. This observation encouraged others to induce convulsions in psychiatric patients by administering camphor and oil or insulin. Such treatment was the predecessor of electroconvulsive therapy (ECT), which was introduced in 1938 and is still used today to treat affective disorders; both clinical depression and bipolar disorder. Generally, ECT is the first line of treatment when rapid recovery is important. It is also used for depressed patients who are unresponsive to pharmacotherapy or cannot tolerate the side effects of them. The effectiveness of ECT (80 to 90%) is higher than that of more conventional treatments, but because its administration is technically more difficult and expensive, its use is limited to the most resistant cases. In addition, although it produces no pain or awareness of the seizure and has a low incidence of side effects, public concern has limited its use.

Although there are a variety of methods to produce seizures, using either electricity or drugs, ECT is used most often because it is more reliable and does not cause the fear reaction of some drugs. Furthermore, ECT is easier and safer to administer and produces the least discomfort and side effects because of the routine use of anesthesia, muscle relaxation (to prevent the convulsion), and oxygenation (to maintain respiration). Although the convulsion (repeated contraction and relaxation of body muscles) is not necessary, the seizure activity in the brain is important to effectiveness. The antidepressant action of ECT occurs more rapidly than it does after drug treatment—usually within a few days of the initial seizures. However, as is true for antidepressant drugs, ECT treatment must be administered several times a week for several weeks to be fully effective (e.g., three times a week for 3 weeks) and prevent relapse.

ECT has a low incidence of side effects, which makes it most appropriate for those with cardiovascular disorders, the elderly, the medically ill, or pregnant women. The most significant side effect is cognitive impairment, although there is no effect on intellectual ability. The impairment takes the form of confusion and memory loss as well as impaired function in tests of verbal episodic memory, delayed recall, learning and retrieval of word lists, and executive function. In addition, significant retrograde amnesia for events preceding the treatment may occur. A recent meta-analysis demonstrated that the cognitive impairments following ECT are primarily limited to the first 3 days post-treatment after which pretreatment levels of functioning are restored. However this pre-ECT level of function may reflect the cognitive dysfunctions that are associated with clinical depression. It is interesting to note that the researchers also found a gradual improvement over pre-ECT function on tasks of processing speed, working memory, anterograde memory, and executive function (Semkovska and McLoughlin, 2010).

The mechanism of action of ECT is not known, but it enhances the function of several neurotransmitter systems, including NE, 5-HT, DA, GABA, and neuropeptide Y. As is true for many of the pharmacotherapies, the repeated treatment leads to downregulation of β2- and α2-adrenergic receptors, and also upregulates BDNF in the hippocampus. Additionally, like most antidepressant drugs, ECT normalizes the function of the HPA axis.

Transcranial magnetic stimulation (TMS) is a relatively new brain-stimulation technique that has been FDA-approved for the treatment of clinical depression with the hopes of producing the benefits of ECT without the cognitive side effects. The treatment involves placing a small coil of wires (often in a figure-eight shape) on the scalp and applying a brief but powerful electric current through the coil (Figure 1). This induces a strong, localized magnetic field that moves unimpeded through the skull and induces a weaker, electric current in the brain. Depending on the stimulation frequency, TMS may either excite the brain or inhibit neural activity. Although the principle is simple, the precise anatomical focus of the electrical field is less clear. Regardless of where the coil is “aimed,” the current that is produced in the head can be conducted along multiple pathways so that the “therapeutic” site may be significantly different than the site where the coil is placed. 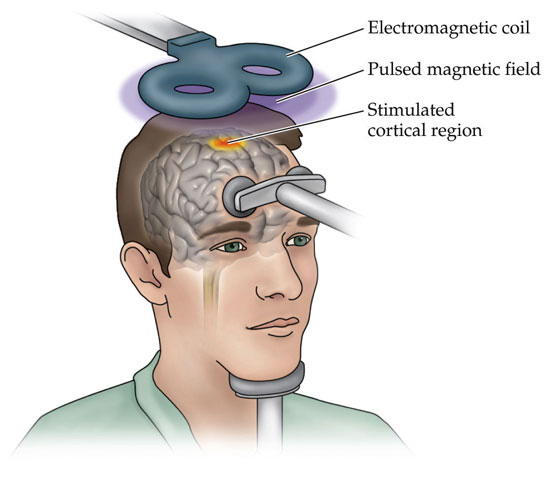 Despite the uncertainty of locus of action, multiple meta-analyses of randomized, sham-controlled studies over the last 10 years have shown that TMS delivered to the prefrontal cortex significantly reduced symptoms of depression in selective populations of patients. Large, long-term clinical trials that evaluated the effects of TMS applied five times a week for 4–6 weeks to the left dorsolateral prefrontal cortex showed that active TMS significantly reduced depressive symptoms compared with sham TMS treatment at weeks 4 and 6. It is of note that those patients who benefited most were those patients who were not currently on antidepressant drug treatment. In addition, patients with the lower the number of prior failed antidepressant treatments (i.e., those who were less treatment-resistant) demonstrated the better the outcome. TMS was very similar to antidepressant drug treatments in its ability to reduce Hamilton Rating Scale for Depression scores, but was somewhat less robust than ECT. However, in contrast to ECT, TMS was only modestly effective for delusional depression and may not work with patients who are treatment-resistant. Nevertheless, TMS is a promising therapy and deserves more-intense evaluation of the parameters of administration to yield further improvements in its efficacy while maintaining its mild side effect profile and minimal chance of causing seizures. Additionally, since the method is minimally invasive, almost painless, and does not require anesthesia, it can be performed on an outpatient basis, unlike ECT. For a more thorough discussion of the methodology and its therapeutic applications, the reader is directed to a review by Wassermann and Zimmermann (2012).

Vagus nerve stimulation (VNS) was first used for treatment-resistant epilepsy in the 1990’s.When it was noticed that some patients showed improved mood, it was tested for treatment-resistant depression. The technique is an outpatient procedure that is done under local anesthesia. It involves making a small incision so a wire can be wrapped around the left vagus nerve in the neck. The wire is then threaded under the skin to the pulse generator. A second, small incision is made to implant the programmable battery powered pulse generator (similar to a cardiac pacemaker) in the left chest wall. The generator delivers electrical pulses to the ascending vagus nerve. It is not known how VNS relieves symptoms of depression, but the nerve projects to several brain areas that may contribute to affective disorders including the NE cells in the locus coeruleus. Vagal stimulation alters the balance of NE, 5-HT, GABA, and glutamate. Of special interest is the finding that VNS increases BDNF expression in the hippocampus of rats.

Clinical trials of VNS have produced mixed results. Although some patients show significant improvement, others experience no reduction in symptoms. Several clinical studies of treatment-resistant patients showed a 50% reduction in depression rating scores in 27–53% of patients, although the only double-blind study completed found no difference between active (15% improved) and sham stimulation (10% improved). However, it is possible that the duration of the study (10 weeks) was too short because when both groups entered a prolonged 12-month trial, rates of improvement were significantly better. The 6–12 months needed for full effectiveness makes VNS more useful for long-term control of symptoms rather than acute treatment. However, once the beneficial effects occur, VNS has been shown to remain effective for at least two years. Its use as an add-on to standard drug treatment has the potential to improve outcome, but more double blind studies are needed to confirm its effectiveness. VNS is painless and generally well tolerated. The most common side effects are voice alterations, cough, neck pain, and shortness of breath, although there are always risks associated with any surgical procedure. Mohr and colleagues (2011) provide further discussion of this potentially useful antidepressant.

Deep brain stimulation (DBS) is considered an experimental approach in treating clinical depression. In a manner similar to that described in Chapter 4 (see Figure 4.15B), DBS requires stereotaxic implantation (see Figure 4.12C) of bilateral electrodes into specific brain regions. The electrodes are activated by a pulse generator implanted subcutaneously in the chest that is connected to the electrodes by leads threaded under the scalp. Stimulation characteristics can be adjusted using a portable device that programs the pulse generator. The rationale for the technique is that the stimulation may modify the aberrant firing patterns of neural networks underlying clinical depression.

An early clinical trial and several follow-up studies using larger numbers of treatment-resistant patients, (i.e., individuals who did not respond to any of four prior treatments, applied high-frequency stimulation via bilateral electrodes implanted in the subgenual anterior cingulate cortex; see Kennedy et al., 2011). Progressive improvement was shown beginning at 1 week and leveled off at 6 months. As early as 1 month, 35% of patients showed significant improvement and 10% demonstrated remission. After 6 months the rate rose to 60% responders and 35% remission. When these patients were followed up after 1, 2, and 3 years the average response rates were 62.5%, 46.2%, and 75% respectively and at 3 years 33% were still in remission. In addition, health survey questionnaires showed improvements in overall physical health, mental health, and social functioning over that time period. Other researchers that stimulated different brain areas such as the nucleus accumbens and anterior limb of the internal capsule have also found antidepressant action. These results are not surprising since multiple brain regions constitute the neural network that produces emotion regulation. Mohr and colleagues (2011) provide a summary of the results.

Although DBS was generally well tolerated, there were some significant adverse events during the course of the study including multiple psychiatric admissions for worsening depression and suicidal ideation. Two of the original 20 patients committed suicide despite the fact that they had achieved remission of symptoms for prolong periods. Since there have been other reports of greater than average suicides among patients treated with DBS for Parkinson’s disease and other psychiatric disorders, careful assessment is called for. Also the studies have not included a sham control group so placebo response cannot be ruled out. Additionally, the small number of depressed patients treated with DBS up to this point prevents an analysis of the demographic characteristics of the responders such as gender, age, duration, of illness, and so forth. Such an analysis will be important because this highly invasive and expensive treatment will never become a first-line choice of treatment so it is vital to identify which individuals will respond optimally.