For those of us who chronically seem to work and play too hard and deprive ourselves of sleep, it may be difficult to believe that sleep deprivation can have benefits. But according to a summary of results compiled from 61 studies completed over 20 years, involving more than 1700 individuals with depression, total sleep deprivation significantly reduced depressive symptoms in 59% of the patients (Wu and Bunney, 1990). Figure 1 shows a typical profile of symptoms before and after total sleep deprivation. It may be worth noting that the patients who responded to sleep deprivation were those who did not show the normal hormonal response to dexamethasone. In fact among the non-suppressors, 57% showed some improvement, compared with only 7% of normal dexamethasone suppressors. Perhaps this finding indicates that a subset of depressed individuals have an underlying neurohormonal dysfunction. Unfortunately, the depressive symptoms returned following a single night of sleep (Figure 2) for most individuals who were responders. However while 83% of the patients not receiving medication relapsed after one night’s sleep, only 59% of those given antidepressant medication relapsed after sleeping. 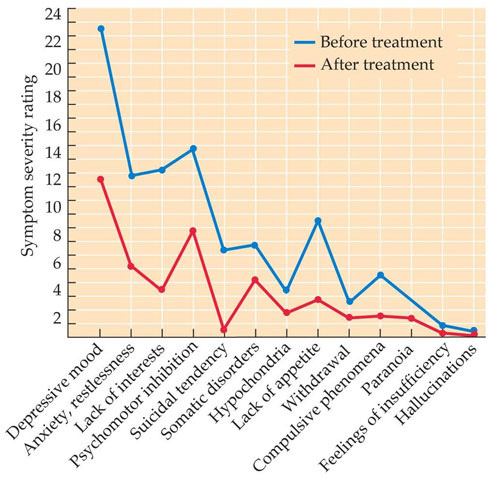 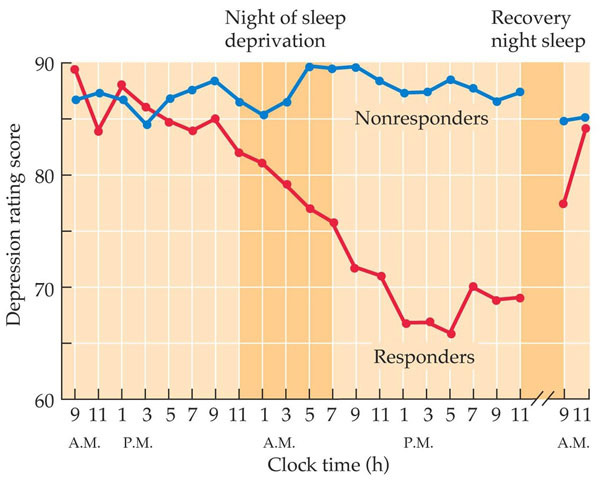 Figure 2 Effects of sleep deprivation on mood rating for two groups of patients. Notice that individuals who respond to sleep deprivation with reduced depression rating scores (responders) return to their previous condition after one night of sleep. (After Wu and Bunney, 1990.)

A more practical approach uses partial sleep deprivation, especially effective during the second half of the night, or sleep phase shifting. Experimental data suggest that changing the sleep–waking cycle (e.g., sleep onset at 5 pm and waking at 2 am) reduces depressive symptoms, perhaps by resetting the normal phase relationship between the sleep–waking cycle and the other rhythms. Combination strategies also seem to provide advantages. For example, following a single night of wake therapy, sleep phase advance with a 5-day gradual return to normal sleep time prevented relapse in two-thirds of wake therapy responders. An additional benefit is that when classic antidepressant medication is used along with partial sleep deprivation, depressed patients respond more quickly than they do using the antidepressant drugs alone or using partial sleep deprivation alone.

It is not clear if wake therapy and phase-shift techniques are effective because of biological clock alterations that restore the normal REM/slow-wave sleep relationship or if they involve modulation of mood-modifying neurotransmitters such as norepinephrine and serotonin. However, the fact that most of the classical antidepressant drugs affect circadian rhythms, especially sleep, supports the argument that sleep may be critical to mood changes in depressed patients. The most consistent effects involve the correction of REM sleep abnormalities characteristic of depressed individuals. Antidepressants in general tend to reduce the amount of REM and prolong the latency of the first episode, although they have less consistent effects on insomnia. Of course, since sleep is regulated by synergistic actions of several neurotransmitter systems, the sleep therapies and antidepressant drug therapies may have similar neurochemical targets. In support of this idea, it has been found that genetic polymorphisms of the 5-HT transporter, which alter the antidepressant effects of serotonergic antidepressants, also alter the antidepressant effects of light therapy and wake therapy in a similar fashion.