The old belief that genius is allied to madness may have its origins in the behaviors of mystics and soothsayers who frequently experienced unusual states of consciousness while revealing their prophesies. Edgar Allan Poe may have been one of the first contemporary authors to suggest that his creative talent might in fact “spring from disease of thought— from moods of mind.” Several questions pose themselves. Is the occurrence of mental illness higher in populations of creative people than in average individuals? If so, then is mental disorder responsible for the special talent we call creativity or are there common factors that may contribute to both creative endeavors and vulnerability to mental disorders? Many influential poets, artists, and composers either wrote about their intense mood changes or have been diagnosed with either mania or depression. However, it is certainly true that the majority of creative individuals do not suffer from mood disorders or mental illness.

To begin to answer some of our questions, we need reliable statistical evidence rather than merely anecdotal reports. To evaluate the hypothesis that a relationship exists between mood disorders and creative behavior, we need to have systematic data collection, which may include structured interviews, along with control groups that are matched on significant variables such as education, socioeconomic level, etc. Also, we can not rely on “madness” as our defining criterion for mental illness. Instead, strict diagnostic criteria such as the DSM-IV definition of mood disorders must be used. As an expert in the field, Kay Jamison (1995) has compiled data from a number of statistical studies that show extremely high rates of depression, mania, cyclothymia (a less severe form of manic–depressive illness), and suicide among creative people compared to controls (Figure 1). Overall, these investigations show a suicide rate 18 times higher in individuals who have significantly contributed to the arts and literature compared to the general population, as well as an incidence of depression 8 to 10 times higher and an incidence of manic–depressive illness 10 to 20 times higher. 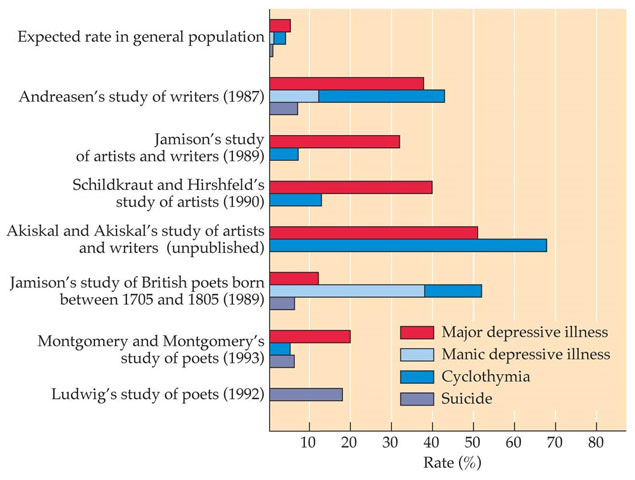 Although there is no way to be sure, Jamison argues that some of the classic symptoms of mood disorders may promote some unique talents. For example, individuals with mania or a less severe condition called hypomania experience expansive thinking and grandiose moods. Hypomanic speech uses more rhyme, alliteration, and unique vocabulary. Tests have also shown that word associations are more rapid during a hypomanic state. Depression produces subdued behavior, inward-directed thoughts, and questioning. Perhaps some individuals who experience manic–depressive episodes use the altered states to view the world as a place of opposing forces and ambiguities and, as a result, develop insights into the constantly changing nature of life.

Does this mean mood disorders should go untreated? Certainly not, because these are serious and dangerous conditions that should not be trivialized. Left untreated, a mood disorder often worsens to the point that the individual cannot work at all. Furthermore, treatment becomes less effective later in the course of the disorder. Some may abuse alcohol or illicit drugs seeking relief. Unfortunately, the side effects of the mood-stabilizing drugs may cause a loss in cognitive skills. The ultimate goal of therapeutics for bipolar disorder should be to control the extremes but not impair the normal range of human emotional experience.