Animal models that use maternal separation from infants provide lots of evidence that early life experiences have an impact on the way the adult responds to stress later in life (see Francis et al., 1999). Young rats that are removed from their mothers and handled for brief periods of time (approximately 15 minutes) on a daily basis, as adults show distinctly different responses to stress compared to nonhandled controls. This early handling reduces both fearful behavior in novel environments and activation of the HPA axis. As adults, these rats show reduced plasma adrenocorticotropic hormone and glucocorticoid responses to restraint stress. They also have lower CRF mRNA levels in the hypothalamus, suggesting they have less CRF to initiate the HPA response. Other physiological differences in the handled animals include reduced CRF receptors in the locus coeruleus, which would be expected to have an anxiolytic effect, and increased glucocorticoid receptors in the hippocampus and frontal lobe, which acts as a negative feedback on the stress hormone response (Figure 1). In addition, handled rats have increased GABAA receptors in the locus coeruleus, which should inhibit the NE response to stress. 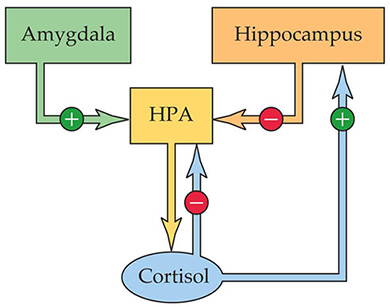 Figure 1 Regulation of the HPA axis. The amygdala activates the hypothalamus, which releases CRF to initiate the HPA stress response, ultimately causing elevated plasma cortisol. High plasma cortisol stimulates the hippocampus, which has inhibitory control over the HPA axis to prevent excess cortisol release. Corticosterone is the major glucocorticoid in rats while cortisol is important in humans. Cortisol also has inhibitory feedback control at the hypothalamus.

More dramatic and exactly opposite effects are found in adult animals that are removed from their mothers as infants for more extended periods of time (180 minutes from days 2 to 14 of age) without handling. The longer separation produces adults that are highly fearful in novel environments and show increased startle responses to sudden noise. GABAA binding in the amygdala and frontal cortex are significantly reduced, while CRF receptor binding is increased in both the locus coeruleus and raphe nuclei (Table 1). 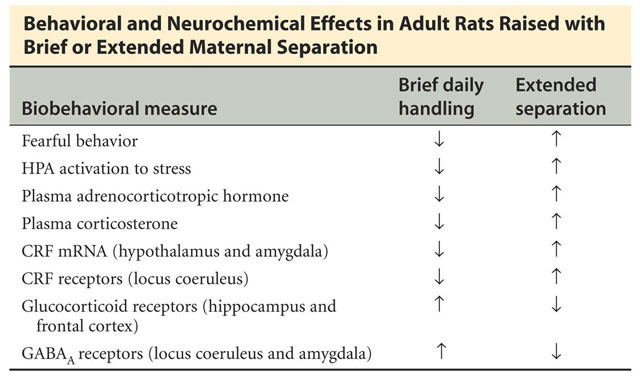 What might explain the differences in these groups of animals? One important observation was that when pups are removed briefly from the mother, the handling of the pups changes the maternal behaviors. The mother of handled pups has shorter but more frequent nesting bouts, which begin with her gathering the pups under her, then suckling, then licking the infants. Overall, these mothers spend significantly more time licking and grooming their young. It would appear that the behavioral and physiological effects of handling mimic normal maternal interaction, which increases sensory stimulation in the offspring and alters the development of the stress circuit. Of significance is that handling is most effective during the first week of life in rats and its effect diminishes after that, indicating the existence of a critical period during which tactile stimulation programs stress neurocircuitry.

Further evidence comes from the evaluation of pups raised by naturally highly interactive (HI) mothers (high in licking, grooming, and arched-back nursing, which provides more opportunity for maternal attention) and those that are less interactive (LI). Both groups of mothers spend the same time with their pups overall, but the nature of the interaction is different. At maturity, those raised by LI mothers showed increased startle responses, decreased open-field exploration, and longer latencies to eat in novel environments. Neuroendocrine and brain receptor changes resembled those of animals that had been separated for prolonged periods. In contrast, the HI mothers raised pups that as adults responded less fearfully and were similar in physiology to animals exposed to early handling. Of significance is the fact that the high stress response of the LI group could be prevented by experimental handling (Figure 2). Thus, regardless of the source, sensory stimulation seems to be the factor that determines the outcome. 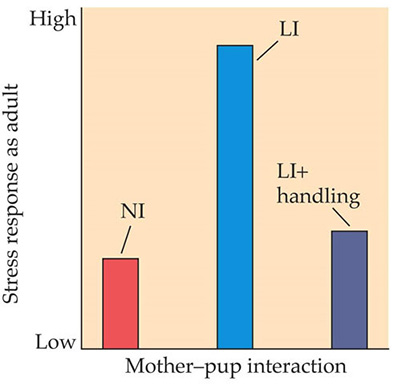 Further support for the importance of early postnatal experience comes from cross-fostering studies. When pups from LI mothers were cared for by HI mothers, they showed decreased HPA activation to challenge and less fearful behavior in a novel environment than pups of LI mothers raised by LI mothers. Similarly, when pups of HI mothers were raised by poor mothers, they showed long-term elevations in stress reactivity, which lasted throughout adulthood. Perhaps most startling was that not only do the changes persist throughout life, but that these characteristics can be transmitted over multiple generations. Hence, pups raised by LI mothers remain highly anxious and when they have their own pups, they lick and groom them less, and this produces another generation of hyperanxious animals. Such persistence of the phenotype is likely due to epigenetic mechanisms (see Chapter 2). An association has been found between the extent of postnatal care during the first week of life and DNA methylation of several genes related to the stress response and maternal care (see Kaffman and Meaney, 2007).

How might this translate into human behavior? Do individual differences in parental care influence human development of stress reactivity? Francis and coworkers (1999) argue that early care does indeed affect the adult’s response to stress and perhaps also his vulnerability to anxiety disorders and depression later in life. Humans, like other animals, show individual differences in parenting styles. But in addition, human parental care is influenced by stress-inducing environmental conditions such as poverty, marital difficulties, and lack of social and emotional support. Under such conditions of high environmental stress, the quality of parent–child interactions declines and leads to abusive and neglectful relationships, which in turn frequently produce neglectful parents in the subsequent generation. It seems reasonable that these conditions produce an adaptive response in the young, making them more vigilant to danger and more physiologically prepared to respond with escape behaviors and fight-or-flight physiological effects. Although the more active stress response may be adaptive at the time, it may well precipitate stress-induced illness, psychopathology such as PTSD, or drug abuse in humans.