Psychopharmacology 3e Web Box 14.2 - The Cutting Edge: Is There a Relationship between Early Heavy Marijuana Smoking and Later Risk for Developing Psychosis?

Earlier in Chapter 14 we saw that heavy marijuana smoking causes short-term cognitive deficits, but any effects that persist after stopping seem to be modest. Similarly, immediate psychotic-like responses to cannabis are usually transient in nature. But what if young people knew that heavy marijuana use significantly increased their risk for developing a psychotic disorder such as schizophrenia later in life?

This important issue has now been addressed by at least 13 longitudinal cohort studies that tested whether there is a relationship between early marijuana smoking and a later onset of psychosis (Murray et al., 2017). These studies were conducted in a number of different locations worldwide, including Germany, the Netherlands, the United Kingdom, Sweden, New Zealand, and the United States. Of the 13 studies published thus far, 10 found a significantly increased risk of developing a psychotic illness (e.g., schizophrenia) or severe psychotic symptoms, while a trend in the same direction was reported in the other three (Murray et al., 2017). Several factors appear to influence this relationship: (1) amount of cannabis use, (2) cannabis content, (3) age of initiation of use, and (4) pre-existing vulnerability (see Figure 1). To elaborate:

(1) Greater usage of cannabis has consistently been associated with increased risk for psychosis, with the highest amounts of use yielding an odds ratio (OR) of almost four (Marconi et al., 2016). Odds ratio is a standard measure of risk of developing a disease or disorder, and an OR of four means that the very high cannabis users have four times the likelihood of developing a psychotic disorder compared to non-users.

(2) Higher THC content along with lower CBD content also increase the risk for psychosis. This was shown dramatically in a London, England study comparing patients suffering from their first psychotic episode with matched controls (Di Forti et al., 2015). Regular use of “skunk” cannabis, a preparation that has high levels of THC but very low CBD, was associated with a much greater risk of experiencing a psychotic episode than using low-potency cannabis or no cannabis at all. The relevance of CBD content stems from evidence that this cannabinoid, in contrast to THC, may have anti-psychotic properties.

(3) Initiation of cannabis use in early adolescence also increases the risk for developing a psychotic disorder (Rabin and George, 2017). Researchers theorize that the still-developing adolescent brain is more vulnerable to the disruptive effects of repeated phytocannabinoid exposure than the adult brain.

(4) Lastly, clinical researchers have identified people termed "ultra-high risk" (UHR) who are already in a prepsychotic state and have a significant likelihood of transitioning to a psychotic episode within the next few years (see Fusar-Poli et al., 2013). A study of UHR cannabis users found that the greatest likelihood of transition to psychosis over a 2-year period occurred in those who used the substance frequently, had started using before the age of 15 years, and continued to use even after initial symptoms occurred (Valmaggia et al., 2014). Research on cannabis users overall (not confined to UHR individuals) additionally found that continuation of use after the onset of psychosis increased the rate of relapse compared to those who discontinued their use as well as non-users (Schoeler et al., 2016). 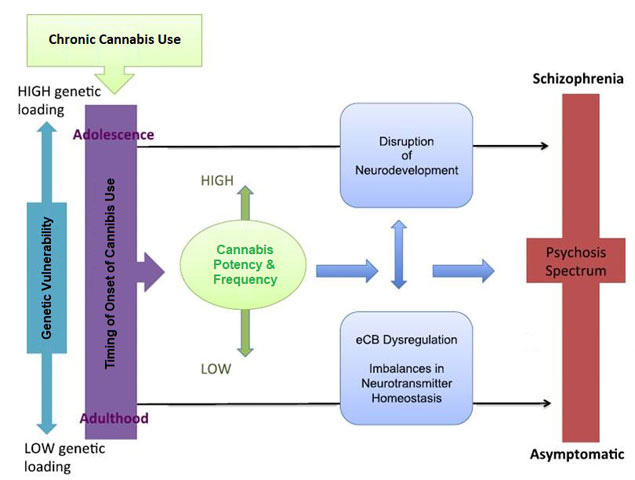 Figure 1 Factors that influence the risk of developing a psychotic disorder in chronic cannabis users. eCB, endocannabinoid. (Modified from Rabin and George, 2017.)

Most researchers who are studying the relationship between cannabis use and psychosis currently argue for a type of causal connection between these phenomena (e.g., Murray et al., 2017). Few believe that cannabis use by itself causes schizophrenia or any other psychotic disorder. Rather, investigators hypothesize that cannabis use, particularly when started during early adolescence and taken regularly in high potency forms, interacts with other factors to enhance the risk of a later psychotic disorder. Nevertheless, it is difficult empirically to prove definitely the existence of such a causal connection, which is why some researchers continue to recommend caution in interpreting the existing findings in this field (e.g., Gage et al., 2015; Ksir and Hart, 2016). Even taking into account such caution, it is sensible for health authorities to caution young people about the risks associated with early and continuing use of cannabis, especially in its more potent forms. Synthetic cannabinoids (i.e., “spice”) pose an even greater danger because of their even greater potency and their ability to precipitate acute psychotic reactions.

The mechanisms underlying the link between adolescent cannabis use and later risk for development of psychosis are not yet understood. However, it is reasonable to speculate about the potential involvement of neurochemical systems that are known to be affected by cannabinoids. Two such systems are the dopaminergic and glutamatergic systems (Bloomfield et al., 2016; Colizzi et al., 2016; Murray et al., 2017), both of which are implicated in the etiology and symptomatology of schizophrenia (see Chapter 19). Another possibility is the endocannabinoid system itself, the disruption of which during adolescent development might have important consequences later on when psychotic disorders most commonly emerge (Volk and Lewis, 2016; Fakhoury, 2017). Continuing research in this area is needed to sort through these various possibilities.