Voluntary drug self-administration by an operant behavior such as a lever press or a nose poke has been a central approach in the quest to develop animal models of cocaine dependence. However, just as some people take cocaine recreationally even for long periods of time, yet do not develop a pattern of abuse or dependence, we cannot assume that mere self-administration by a rat or a mouse is equivalent to dependence on the drug. As discussed by Roberts and colleagues (2007), some of the aspects of cocaine dependence that have been modeled by animal researchers include (1) an escalation of drug intake by self-administering animals, (2) relapse to cocaine-seeking behavior after a period of abstinence, (3) cocaine-seeking behavior despite aversive consequences, and (4) increased breaking point when working to self-administer the drug on a progressive ratio schedule. Because of space limitations, we will present just a few examples of this type of research.

The first example comes from two seminal papers by Ahmed1 and coworkers (Ahmed and Koob, 1998; Ahmed et al., 2002) in which they compared rats given a relatively short (1 hour per session) period of access to the cocaine self-administration procedure with animals given a long (6 hours per session) period of access. The first thing that they discovered was that the long-access (LgA) rats gradually escalated their daily cocaine intake, in contrast to the stable daily intake of the short-access (ShA) animals (Figure 1A). This dose escalation could be seen even when the first hour of cocaine intake in the LgA rats was compared with the single hour of intake allowed in the ShA rats (Figure 1B). To determine the neurobiological mechanism underlying this increase in cocaine self-administration, the researchers determined the thresholds for electrical self-stimulation of brain with electrodes implanted in the lateral hypothalamus. These measurements were taken both 3 hours and around 17 to 22 hours following the end of each self-administration session. The data show a clear elevation in the amount of current required to obtain electrical self-stimulation in the LgA rats compared with ShA animals or naive (drug-free) controls, indicating a dysfunction in the brain’s reward circuit (Figure 1C). Together, the data reveal that longer periods of access to cocaine can lead to an escalation of intake that, in turn, down-regulates the reward circuit. This presumably makes the cocaine less rewarding and thus supports further increases in drug consumption, which parallels some of the reported findings (i.e., reduced cocaine-induced euphoria accompanied by increased use) in the clinical drug literature (Small et al., 2009). A recent study using the LgA procedure demonstrated that phasic DA release in both the ventral striatum (NAcc) and dorsal striatum gradually diminished over the course of response escalation (Willuhn et al., 2014). Moreover, escalation was reversed by treatment with L-DOPA, suggesting that depletion of DA and a consequent reduction in phasic release is one of the forces driving the observed increase in drug-taking behavior. 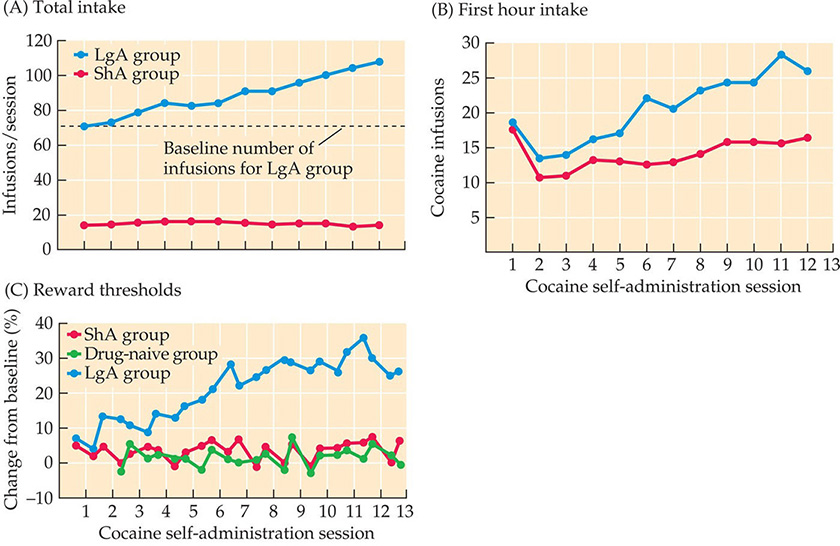 Figure 1 Escalation of drug intake and increased reward thresholds in rats given long access to IV cocaine. (A) Rats were initially trained to lever-press for IV cocaine infusions, after which the animals were divided into two groups: a short-access group (ShA) that had access to cocaine for 1-hour sessions, and a long-access group (LgA) that had access to cocaine for 6-hour sessions. Session 1 shown here is the first day of each experimental condition. The ShA rats maintained a low and stable intake across all 12 sessions. The LgA rats self-administered much more cocaine than the ShA animals even on session 1 because of the longer period of drug availability (6 hours versus 1 hour). Importantly, cocaine self-administration began to escalate in the LgA rats within a few sessions and continued to rise through the 12 sessions of the experiment. (B) Using the same escalation paradigm, LgA rats were shown to increase their cocaine-taking behavior even during the first hour of self-administration compared with the ShA group. (C) Thresholds for electrical self-stimulation of the brain were increased during the period of escalating cocaine intake in the LgA rats. Note that there was no change in the mean stimulation threshold for the ShA rats, which was similar to stimulation threshold measured in a drug-naive group. (A after Ahmed and Koob, 1998; B,C after Ahmed et al., 2002.)

A second example chosen for presentation is from an equally significant series of studies conducted by Deroche-Gamonet and colleagues (Deroche-Gamonet et al.,2004; Deroche-Gamonet and Piazza, 2014). They allowed their rats to self-administer cocaine over approximately 3 months, which is much longer than the typical study in this area. During this time period, they repeatedly tested their animals for the following aspects of cocaine dependence: (1) persistence of cocaine-seeking behavior during periods when the rats were given a cue that the drug was not available; (2) continued cocaine self-administration despite aversive consequences (electrical foot shock delivered at the same time as the drug infusion); (3) enhanced motivation for cocaine as indicated by an increase in the breaking point on a progressive ratio schedule; and (4) vulnerability to relapse based on a reinstatement procedure using a priming dose of cocaine following 5 days of abstinence from the drug. Importantly, because the investigators found a wide range of differences among the rats on these measures, they used the results from the reinstatement procedure to divide the animals into two groups: the top 40% with the highest amount of responding on the reinstatement test (HRein), and the lowest 40% in terms of responding on this test (LRein). All of the results were subsequently analyzed and presented as comparisons between these two subgroups. As presented in Figure 2, as the number of days of cocaine self-administration progressed, the HRein rats but not the LRein rats showed a sharp rise in number of responses (in this case, nose pokes) during the signaled no-drug period (Figure 2A), an increase in the number of cocaine infusions taken despite concurrent foot shock (Figure 2B), a significantly higher breaking point for cocaine self-administration (Figure 2C), and of course substantially greater responding for the higher doses of cocaine during the reinstatement test (Figure 2D). Based on these and other findings not shown, the researchers concluded that addiction results from a combination of prolonged exposure to the drug, which can be seen from the fact that changes in behavior occurred only after many self-administration sessions, and factors that lead to differential vulnerability among individuals, which accounts for the fact that only the HRein group showed these behavioral changes.

Figure 2 Emergence of addictive-like behaviors in a subgroup of rats self-administering cocaine over a long time period. Rats self-administered IV cocaine by making a nose-poke response. The animals were divided into two groups: high cocaine reinstatement (HRein) and low reinstatement (LRein) based on the number of nose pokes when a priming dose of cocaine signaled renewed availability of the drug following a 5-day withdrawal period. The results show that the HRein group compared with the LRein group increased their cocaine-seeking behavior during periods of no drug availability (A), obtained a greater number of cocaine infusions when electric shock was paired with drug delivery (data expressed as % of baseline number of infusions) (B), showed a higher breaking point on a progressive ratio schedule (C), and showed a higher response rate in the reinstatement paradigm at the highest dose of cocaine (D). (After Deroche-Gamonet et al., 2004.)

A third example comes from two studies by Belin and coworkers (2008, 2011). In the two studies together, researchers examined the potential role of three different traits in predicting the transition from mere self-administration of cocaine to compulsive use: (1) locomotor activity in response to a novel (inescapable) environment (one type of an animal model of novelty- or sensation-seeking in humans); (2) preference for a novel environment in a free-choice situation (an alternate animal model of novelty- or sensation-seeking behavior); and (3) impulsivity measured using a five-choice serial reaction-time visual attention task (a task that measures several behavioral parameters, including impulsive responding by the subject). Although the two studies had different aims, the results indicated a role for both sensation seeking (using the free-choice task; Belin et al., 2011) and impulsivity (Belin et al., 2008) in the development of compulsive cocaine-taking behavior in rats. These findings provide new support for the hypothesis that these two personality traits play a significant role in determining whether an individual who uses cocaine goes on to develop a pattern of cocaine abuse or dependence.

The point of this web box is to emphasize that the development of valid animal models of drug abuse and dependence requires that researchers pay close attention to the range of clinical symptoms considered to be representative of the drug-dependent state and to determine the best experimental paradigms for reproducing those symptoms. The examples presented earlier show that progress in this area has been made with respect to cocaine abuse and dependence. Nevertheless, as we discuss later in the section on treatments for cocaine dependence, progress in developing new medications, which relies heavily on the results of animal model research, has been very disappointing thus far. Consequently, there is a critical need for continued exploration of novel models that will yield better predictability so that success of a newly developed medication in our animal models will translate to equivalent success when the medication is brought to human clinical trials.

1 This is the same Serge Ahmed who performed much of the research discussed in Web Box 12.1.

Deroche-Gamonet, V., and Piazza, P.V. (2014). Psychobiology of cocaine addiction: Contribution of a multi-symptomatic animal model of loss of control. Neuropharmacology, 76, 437–449.