In a later section of this chapter, we will point out that only about 10% to 15% of people who start using cocaine by the intranasal route (i.e., snorting) eventually become dependent on the drug. Thus, merely trying cocaine or even using it recreationally for some period of time does not lead to dependence in the majority of users. Nevertheless, once dependence has been established, it seems very difficult for most individuals to “kick” the habit, based on the high rates of relapse of people who have participated in various cocaine treatment programs. Later we will also describe evidence for procedures that lead to compulsive types of cocaine-taking behavior in experimental animals such as rats. However, it is interesting to note that such studies (i.e., of transition from mere cocaine self-administration to compulsive cocaine-taking behavior) are almost always conducted under conditions in which no alternative reinforcements are available to the animals. How does cocaine fare as a reinforcer when other reinforcers are available to choose from?

Perhaps the first study to address this question was reported in 1978 by Aigner and Balster. These experimenters used a complex experimental procedure with rhesus monkeys in which the animals performed a lever-pressing response for either an IV cocaine infusion or a small amount of food. Both reinforcers were available around the clock, although each trial (i.e., behavior resulting in the delivery of a reinforcer) was separated from the next trial by a 15-minute intertrial interval. The animals were given no food other than what they earned by choosing the food lever over the cocaine lever. The results clearly showed that most of the responses were made on the cocaine lever, such that the monkeys lost up to 10% of their body weight over the 8-day study.

The findings of Aigner and Balster seemed to indicate that cocaine was a supremely powerful reinforcer, so much so that animals would deprive themselves of needed food to obtain the drug. However, after the early period of self-administration studies, researchers began to move away from paradigms in which drugs such as cocaine were available for 24 hours a day in favor of paradigms utilizing limited periods of drug access. When a few studies began to be performed using such limited access periods, the evidence indicated that other reinforcers such as food or even a sweetened water solution were sometimes chosen by animals in preference to IV cocaine. This was the first sign that cocaine may not be as powerfully reinforcing as first thought (and as still asserted often in the popular media).

If that had been the end of the story, we might not have chosen to explore it here. However, this topic was revisited in a powerful set of studies from the laboratory of Serge Ahmed (Lenoir et al., 2007; Ahmed, 2010; Cantin et al., 2010) in an attempt to better quantify the relative reinforcing potencies of cocaine versus a sweetened water solution. Here we will focus on the study by Cantin and coworkers, which was designed to pit a saccharin-flavored solution against cocaine under a variety of experimental conditions. Interestingly, when a breaking point procedure was used with the two reinforcers, the average breaking point for cocaine was consistently higher than the average breaking point for the saccharin solution. Thus, if the investigators had relied solely on this common measure of reinforcement strength, they would have concluded that cocaine was a more powerful reinforcer than the saccharin solution. However, a completely different story emerged when the two reinforcers were available concurrently. In that case, 24 of 29 rats tested (about 83%) responded more strongly on the saccharin lever than the cocaine lever, thus demonstrating a preference for the sweet solution over cocaine. The mean data over 6 choice days are depicted in Figure 1, which shows that the saccharin preference was evident on the first choice day and then increased over the next few days. 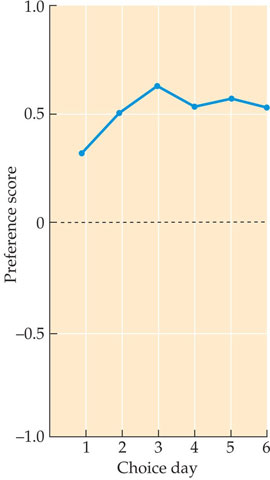 Figure 1 Rats choose saccharin-sweetened water over intravenous cocaine. Rats were trained to lever press either for water containing 0.2% saccharin or for IV cocaine (0.25 mg/infusion) on a fixed-ratio-1 schedule. After initial training, the animals were tested in a choice procedure during which both reinforcers were made available by pressing different levers. The data illustrate the relative preference for one reinforcer over the other, with positive values representing a preference for the sweetened water and negative values representing a preference for IV cocaine. The dashed line at 0.0 represents no preference, whereas 1.0 or –1.0 represents a complete preference for sweetened water or cocaine, respectively. The positive scores over the 6 test days show that the sweetened water was generally preferred over cocaine, although it can be seen that the drug was chosen on some trials, because the mean scores did not reach 1.0 on any test day. (After Cantin et al., 2010; CC-BY.)

Additional experiments were performed to support the validity of the apparent preference for the saccharin solution. In one of these experiments, which lasted a total of 6 months, a separate group of rats was trained to respond on alternate days for cocaine or saccharin for 59 days on a fixed-ratio schedule, followed by 40 alternating days of responding on a progressive-ratio schedule, and then 52 days on which a choice was allowed between cocaine or the sweetened solution. Over this period of time, the rats self-administered an average of almost 1300 IV doses of cocaine (yielding an average cumulative dose of over 900 mg/kg), indicating that there was a substantial opportunity for the cocaine exposure to alter brain chemistry to cause an increased motivation to take the drug. Yet, when the animals were subsequently tested for responding during extinction when neither saccharin nor cocaine was available, there was greater responding on the saccharin lever, indicating stronger seeking of the sweet solution reward than the cocaine reward. Moreover, recent research by Madsen and Ahmed (2015) used additional control procedures to rule out alternative explanations for the selection of the cocaine-paired lever over the lever paired with saccharin. Taken together, these and other results not mentioned here support the conclusion that the majority of laboratory rats find a sweetened water solution to be more rewarding than cocaine.

The findings just described have been extended by research using other abused drugs. For example, similar studies found that under the appropriate experimental conditions, many (if not most) rats also prefer saccharin-flavored water over either heroin (Lenoir et al., 2013) or nicotine (Huynh et al., 2016). Furthermore, sweet taste is not the only alternative reinforcer that can compete with cocaine. Using a place conditioning paradigm, Zernig and colleagues found that most rats and mice would come to prefer contextual stimuli paired with a dyadic social interaction with another species member over stimuli paired with cocaine (Zernig et al., 2013; Kummer et al., 2014; Zernig and Pinheiro, 2015).

A few caveats regarding the alternative reinforcer studies need to be mentioned here. First, although in some of the experiments pitting saccharin against cocaine, rats had substantial exposure to the drug from long periods of self-administration, the investigators did not use any of the procedures discussed in Web Box 12.2 that have been found to elicit compulsive cocaine-taking behavior in rats. It would be interesting and informative to see whether the relative preference for cocaine versus a saccharin solution would remain the same if the rats were trained using the procedures that elicit cocaine-taking behaviors more indicative of compulsivity than mere self-administration of the drug. Second, a recent study by Vandaele and coworkers (2016) found that being “under the influence” of the drug being tested had a significant effect on choice of reinforcer. When under the influence of cocaine, which is an appetite suppressant, rats selected to take more cocaine instead of switching to the saccharin solution. In contrast, when rats were under the influence of heroin, which enhances appetite, the animals more readily selected the sweetened solution. The authors interpret these findings to indicate an acute effect of the administered drug on the motivational properties of the sweet taste. More generally, the results show how the relative rewarding characteristics of drugs versus nondrug rewards can vary depending on the conditions operating at the time of choice.

Beyond understanding the limitations of the animal studies on alternative reinforcers, we need to ask whether similar choice situations have been tested in human cocaine users. The answer is yes, and the results depend on the dose and route of cocaine administration, type of alternative reinforcer (e.g., money versus merchandise), value of the alternative reinforcer, and amount of effort required to obtain either reinforcer (Moeller and Stoops, 2015). For example, an early study of occasional cocaine users by Higgins et al. (1994) found that these individuals would typically choose a mere $2 reward over snorting as much as 100 mg of cocaine HCl. In contrast, when regular crack cocaine smokers were given a choice between a merchandise voucher worth $5 and being allowed to smoke a given amount of cocaine base (which they had briefly sampled to determine the effect of each dose), there was a clear relationship between dose and cocaine choice such that the two highest doses, of 25 mg and 50 mg, led to nearly complete choice of the cocaine over the money (Collins et al., 2003) (Figure 2). Not coincidentally, these same doses also led to the most intense ratings of cocaine “high” by the subjects (Figure 3). These findings suggest that the apparent low value of cocaine in rats, even after many sessions of self-administration, does not necessarily correspond to a low value of cocaine in humans who are regularly consuming highly addictive forms of cocaine such as crack. 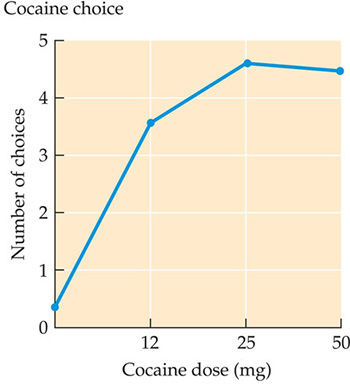 Figure 2 Preference of regular cocaine users for cocaine versus money. In this study, active users of crack cocaine were given five trials involving the choice either to smoke a dose of cocaine base (0, 12, 25, or 50 mg) or to receive a $5.00 voucher for merchandise redeemable at a local retail store or supermarket. Preference was a function of drug dose. When the cocaine dose was 0, there were virtually no choices for the drug, but when the dose was 25 or 50 mg, cocaine was chosen on almost all the trials. (After Collins et al., 2003.) 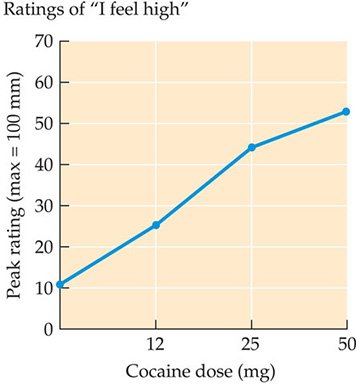 Figure 3 Ratings of the subjective “high” produced by each drug dose. The active users of crack cocaine used a 100-mm visual analog scale to rate the intensity of drug response, with no response at all indicated by the 0 mm point and the highest possible response indicated by the 100 mm point. (After Collins et al., 2003.)

Overall the combined results from both animal and human studies support the proposed idea in the addiction field that a major risk factor for developing drug dependence and for relapsing during attempts at abstinence is a lack of competing reinforcers in the person’s life. Consequently, an important goal in therapeutic interventions should be to find and implement significant nondrug reinforcers that can substitute for the substance(s) being taken by the user.