Despite the many centuries of effective treatment with opioid drugs, it has never been possible to separate effectiveness from the development of tolerance and dependence. The goal with opioid therapeutics has always been to keep the dose as low as possible to provide needed relief from pain and avoid the increasing side effects that occur as the dose is increased. Unfortunately, tolerance to the analgesic effect makes it necessary to raise the dose, while some of the most troubling side effects, such as constipation, do not decrease and therefore become an increasing problem. Also, although the withdrawal syndrome can be minimized by gradually tapering the dose of the drug, the risk of abstinence signs is something most clinicians would ideally avoid. Inturrisi (1997), Trujillo (2000), and others have suggested that if we could better understand the neural basis for opioid tolerance and dependence, we might administer non-opioid drugs that prevent these phenomena, along with opioids, without diminishing the analgesia.

Tolerance and physical dependence are reversible changes in behavior based on experience and neuroadaptation to the presence of the drug and hence represent the plasticity of the nervous system. We have described the contribution of learning processes, such as drug–environment associations, to tolerance and other components of drug taking. Since the neurotransmitter glutamate and its N-methyl-D-aspartate (NMDA) receptor are critical for associative learning and memory (see Chapter 8), researchers have begun to evaluate the role of that system in substance abuse. The earliest evidence supporting a role for glutamate in opioid tolerance and dependence came from pretreatment with the noncompetitive NMDA antagonist dizocilpine (MK-801), along with chronic morphine. MK-801 reduced the development of tolerance to the analgesic effects of chronic morphine (9 days of treatment), as measured with the rat tail-flick test, but did not change the acute analgesic effects. The drug does not have analgesic effects itself (Figure 1). Dizocilpine additionally interfered with the development of physical dependence to morphine, as demonstrated by naloxone-precipitated withdrawal after chronic treatment. It is important to realize that although the NMDA antagonist prevented the acquisition of tolerance and physical dependence, it did not reverse their expression if the antagonist was given after they had developed. This means that the glutamate antagonist prevented the neural plasticity and learning component of tolerance and dependence. Other research also suggests NMDA receptor involvement in sensitization (reverse tolerance). The MK-801 treatment also prevents the plasticity changes when given chronically along with other drugs, including amphetamine, cocaine, nicotine, alcohol, benzodiazepines, barbiturates, and cannabinoids. It would appear that glutamate, acting at NMDA receptors that increase intracellular calcium, may have a common role in experience-induced changes for many drugs (Trujillo, 2000). 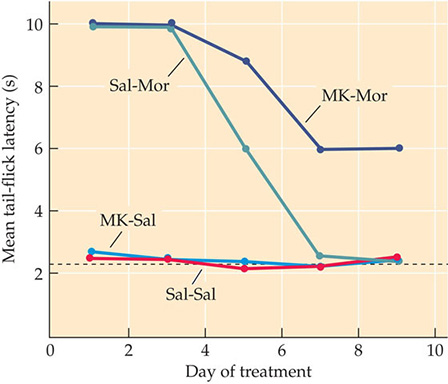 Figure 1 Tolerance is reduced by MK-801. Each day for 9 days, four groups of rats were injected with a different combination of saline (Sal), MK-801 (MK), and morphine (Mor). Analgesia was tested with the tail-flick test on alternate days after treatment. Animals receiving only saline or saline + MK were not different from untreated animals (dashed line). Morphine (Sal-Mor) initially increased latency showing analgesia, but tolerance developed by day 7. In contrast, the MK-Mor group showed the same initial analgesia and much less tolerance over 9 days.

A good pharmacology student might now be wondering whether the NMDA receptor blockade with MK-801 is unique or whether other NMDA receptor antagonists would act similarly. As you see in Table 1, all the drugs that block NMDA receptors at several distinct sites (noncompetitive, competitive, or the glycine site) prevent morphine tolerance and, in those cases where tested, also block morphine dependence. 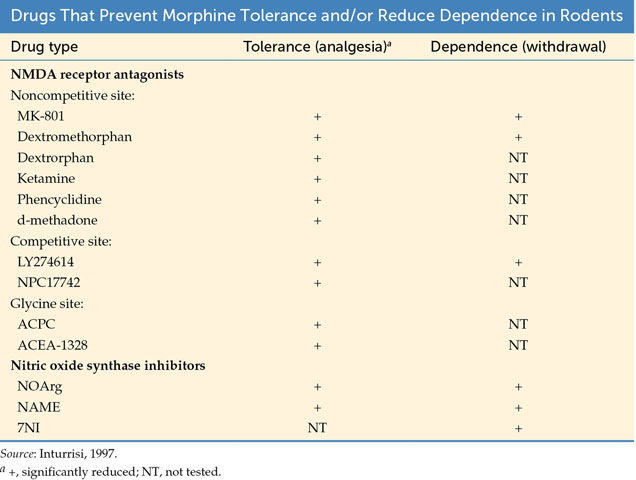 Thus far we have looked only at behavioral measures. Does NMDA antagonism also prevent opioid-induced neuronal changes after repeated administration? Mao and colleagues (1995) found that MK-801 prevented tolerance to the analgesic effects and in addition prevented the increase in protein kinase C (PKC) in the dorsal horn of the spinal cord that normally accompanies chronic opioid use. Increased opioid-induced PKC activation may phosphorylate the NMDA receptor, making it easier to be activated and thereby contributing to tolerance. Figure 2 will remind you that increased NMDA receptor action increases calcium entry, which in turn stimulates nitric oxide (NO) synthase, the enzyme needed to make nitric oxide, which may contribute to the development of tolerance. Evidence presented in the table suggests that, indeed, NO synthase inhibitors are also effective in reducing morphine tolerance and dependence. To test this model further, many more experiments are called for, but administering an NMDA antagonist along with morphine when treating chronic pain has great potential benefit for patients and may in addition provide a new direction for opioid addiction programs. 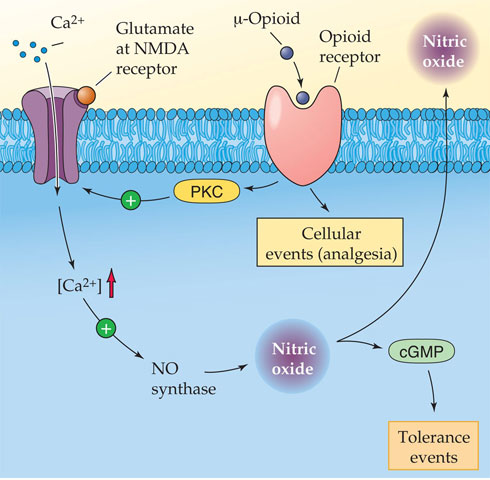 Figure 2 Opioids acting at their receptor site produce cell changes causing analgesia. In addition, they activate protein kinase C (PKC), which phosphorylates the cation channel normally opened by glutamate, enhancing channel function. That action and its subsequent effects on NO synthesis may be responsible for tolerance. MK-801 prevents the increase in PKC and thereby prevents tolerance effects. Interrupting the intracellular pathway by preventing NO synthesis is apparently an additional way that the development of tolerance can be reduced.